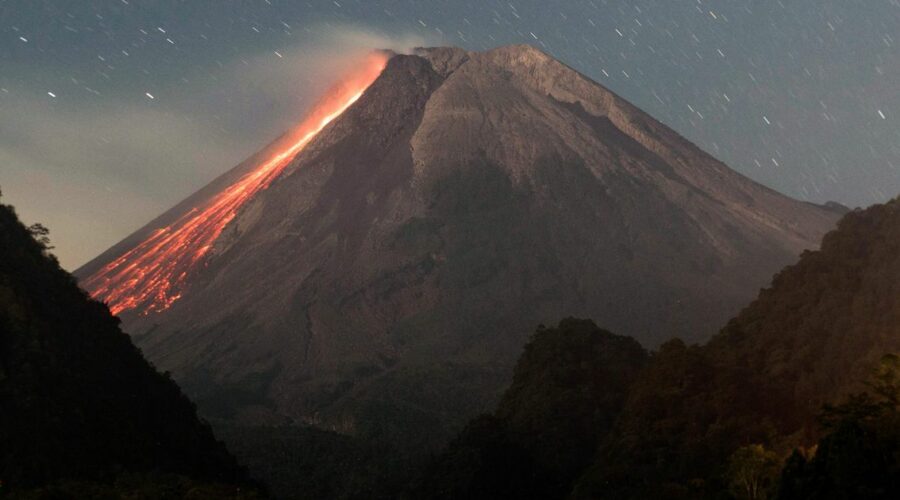 An Indonesian volcano has erupted sending lava rushing down its slopes as hot ash is sent high into the air.

Mount Merapi is located on the densely populated island of Java and is known as the most volatile volcano in the country.

The volcano erupted at 5am local time on Sunday (Saturday 11pm GMT) and has since seen rocks and other debris come hurtling down the southside of the mountain.

Speaking in the Independent, the head of the Volcanology and Geological Hazard Mitigation Centre in the city of Yogyakarta Hanik Humaida said the eruption has caused ash to blanketed several nearby villages and towns.

Indonesia’s Geology and Volcanology Research Agency has advised residents close to the slopes of the volcano to stay at least five kilometres away.

It has been reported that a kilometre of hot ash has gone into the sky, while three-kilometre clouds of gas headed down the slopes.

There have currently been no casualties as a result of the latest eruption but warnings are in place for local residents.

The mountain’s volcanic activity has been increasing in recent weeks as authorities closely monitored the situation.

Back in January this year, it was reported Mount Merapi erupted 30 times in a single day.

Mount Merapi is known as Gunung Merapi, which means Fire Mountain in Indonesian, and is one of the most dangerous volcanoes in the country.

The 2,968-meter peak is located near Yogyakarta, which is an ancient city that is populated by several hundred thousand people in a large metro area.

The last major eruption from Mount Merapi occurred in 2010 and resulted in 347 losing their lives as a result.

Indonesia is prone to suffering from earthquakes and volcanic activity due to it being part of the Pacific “Ring of Fire”, which is a number of seismic fault lines around the ocean.