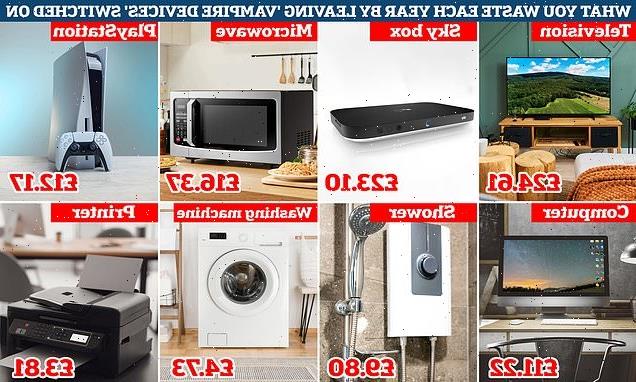 The ‘vampire devices’ sending your bills soaring: Electronics like microwaves, televisions and games consoles left on standby are costing UK households £147 a year

Households in Britain could save an average of £147 on their annual electricity bills by turning off ‘vampire devices’ which drain power even while on standby, experts revealed today.

People are spending £2.2billion a year by leaving on devices such as microwaves, televisions and games consoles when they are not being used – which is about two months’ worth of electricity charges for the average home.

Research by British Gas has found the most expensive standard household device to keep on standby for a year is a television at £24.61, followed by a set-top box from a provider such as Sky or Virgin Media for £23.10.

A phone charger is a smaller amount at £1.26, while other devices such as internet routers and smart speakers are also costly – but homeowners will often have more reason to keep the latter two on when not being actively used.

It comes amid warnings of further rises in energy prices after the bills of 22million households in Britain on the standard Ofgem cap increased by 54 per cent at the start of April to an annual average of £1,971, up from £1,277. 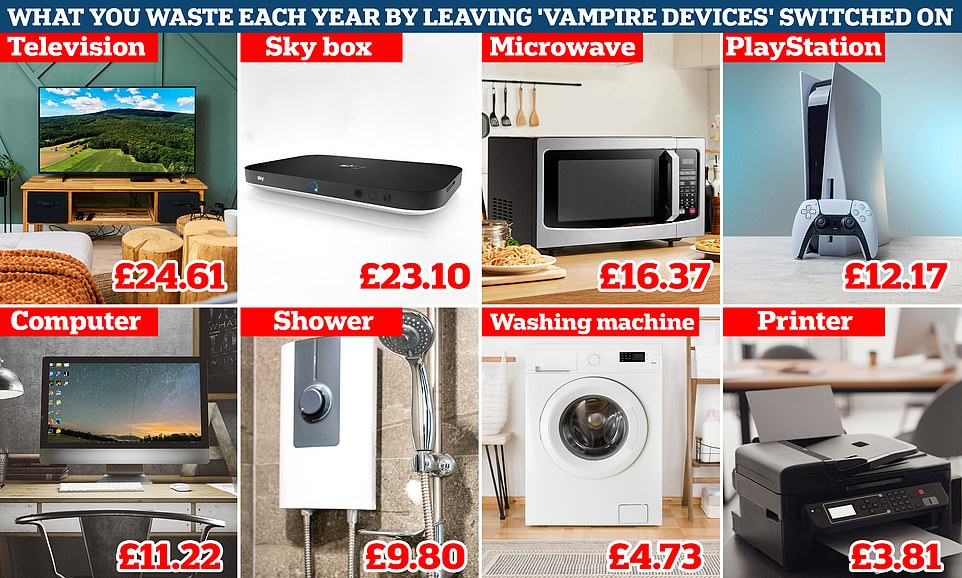 Experts have recommended that homeowners invest in smart plugs to ensure everything is turned off via their mobile phone, or connecting devices to an extension lead that can be switched off overnight.

British Gas energy expert Marc Robson told BBC News: ‘At night, or when not in use, try switching off devices at the mains rather than switching to standby, as even the standby light on a television uses energy.

How much you waste each year by leaving ‘vampire devices’ on

‘Try not to overcharge your mobile phone and laptop unnecessarily. As soon as your device is charged, try and get into the habit of unplugging it. Not only will this save energy but it also prolongs battery life.’

Energy chiefs said last week that four in ten households face fuel poverty this autumn, with analysts fearing average bills on the cap could surge to £2,600 in October – and possibly even £5,000 – amid the fallout from Russia’s invasion of Ukraine.

MPs were told on April 19 that the misery facing ordinary households would not be shared by the fat cat bosses of some energy firms. The boss of Bulb, which is now government-run following its collapse, is still being paid £250,000 at public expense.

Industry leaders condemned the Treasury’s plans to help households – a £150 rebate on council tax bills and a £200 loan in October.

Giving evidence to the Commons energy committee, the chief executive of E.ON insisted it was ‘not nearly enough’. Michael Lewis also said that 30 to 40 per cent of households – around ten million – could go into fuel poverty from October.

This is usually defined as when an address has to spend an excessive proportion of income to stay warm.

Twenty-nine energy suppliers have gone bust since the end of last year amid spiralling increases in the wholesale price of gas.

And a survey by the Office for National Statistics (ONS) released on Monday found four in ten people in the UK said they were struggling to pay their energy bills in March, even before the latest price cap hike.

The ONS found that 43 per cent of those who pay energy bills said it was ‘very or somewhat difficult’ to afford them last month. In the most deprived parts of England 57 per cent of people reported difficulty in paying energy bills, but even in the least deprived areas of the country, 35 per cent struggled.

Meanwhile, nearly a quarter (23 per cent) of adults across the country reported it was very difficult or difficult to pay their usual household bills last month compared to a year ago. In November the same figure was 17 per cent.

Bills are rising alongside everyday costs for nearly everyone in the UK, as well as in many other countries. Inflation rose by 7 per cent in the 12 months to March, according to the latest Consumer Prices Index data from the ONS.

27/04/2022 World News Comments Off on How much does it cost to leave your electronic devices on standby?
Markets