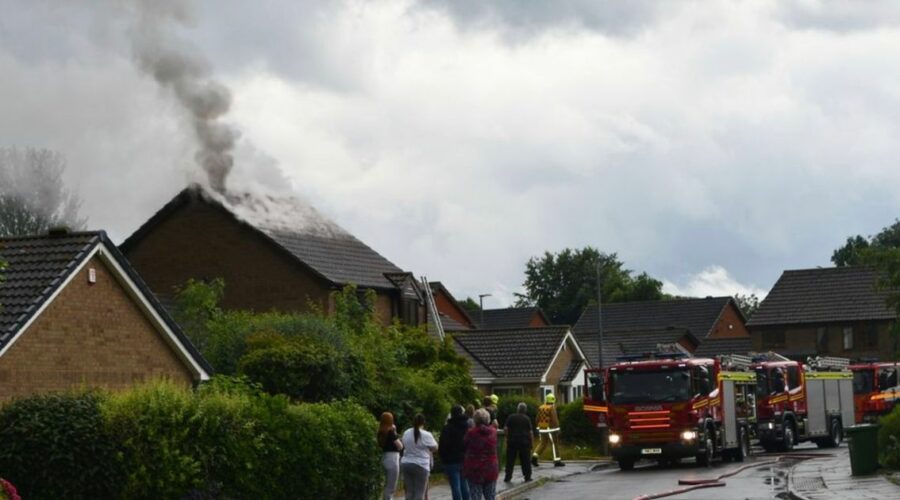 Lightning has sent a family home ablaze with flames tearing through the roof until it caved in.

Firefighters were still battling the aftermath of the strike on Wednesday evening over an hour after it was reported at 5:12pm.

Images of the home in Silvergarth, Grimsby, Lincolnshire show an exterior wall scorched black from the fire and half the rooftop missing but no one was harmed.

According to GrimsbyLive the family and their pet dogs were inside the property at the time but oblivious to the lightning and the initial outbreak of the fire.

It was not until a passerby told them the house was going up in flames that they evacuated the building.

In a statement from Humberside Fire and Rescue, a spokesperson said: "We were called to the scene at 5.12 and arrived at 17.16.

"There was one aerial appliance called and four engines, three from Peaks Lane and one from Immingham East.

"We've isolated the fire and all persons are accounted for.

"There was smoke coming through the roof on arrival and firefighters were sent in with four breathing apparatus.

"Humberside Fire and Rescue remain at the scene."

Tony Jones was passing in his car and stopped to call 999. He ran to the doorway to alert the occupants.

He told the paper: "I had just left my mate's house and was driving past and could see all this smoke.

"When I knocked I asked the woman if she was aware the roof was on fire. All she said was 'Is it?'"

Tony added: "The fire crews where here within minutes and they used hoses through the house to tackle the fire. The family got out and the dogs. There was a little girl inside . I am pleased they got out safe.

"Some of the neighbours came out and helped them evacuate from the house."

The road is currently closed while emergency services work at the scene to make the house safe.

A plume of smoke could be seen coming from the property for some distance.

One nearby resident said: "The bolt of lightning was so bright and loud I looked out for anything that might have been hit in case I had to ring 999. Then I saw the large plume of smoke."