The Nazis next door: From farm hands to teachers, the Home Office blacklist featuring 720 Britons who ‘wanted to help Hitler if he invaded the UK’

A fascinating Home Office blacklist featuring 720 Britons believed to have wanted to help Nazi Germany in the event of a UK invasion has been revealed.

Historian Neil Storey has studied the regional lists at the National Archives which were compiled by police and MI5 in August 1940 during the Second World War.

They revealed the names of people thought to have been in a network of traitors, closet Nazis and an underground army of infiltrators known as the Fifth Column.

Civil servants, teachers and shopkeepers were all on the list, with Mr Storey saying most were ‘ordinary people’ from across Britain – ‘the person next door’.

The list also included some more well-known names such as British Union of Fascists leader Sir Oswald Mosley, who was imprisoned in 1940 and his party banned. 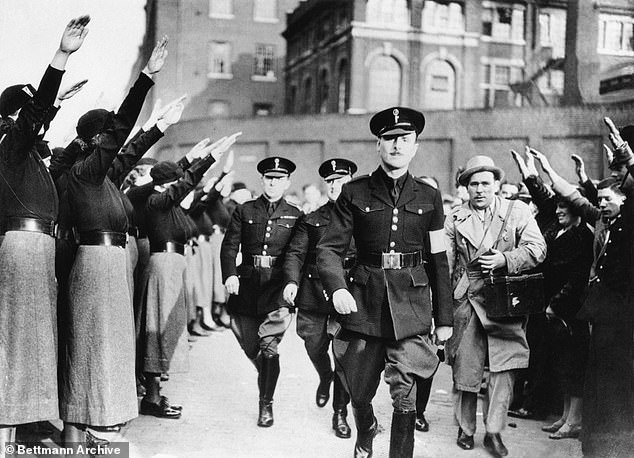 Sir Oswald Mosley receives the Fascist salute from his followers in London in March 1936. The British Union of Fascists leader was on the Home Office blacklist and was imprisoned in 1940

The files were compiled following evaluations after reports from friends, relatives or neighbours who suspected someone they knew of pro-Nazi statements or actions.

Among those on the list was a German-born woman living in Ipswich, who allegedly said she would welcome German parachute troops if they landed near her house.

Another was a mother from Germany but living in Crowthorne, Berkshire, whose daughter decorated her bedroom wall with magazine pictures of Adolf Hitler.

And a house search of the district leader of a branch of the Imperial Fascist League in nearby Maidenhead revealed a huge assortment of Nazi paraphernalia. 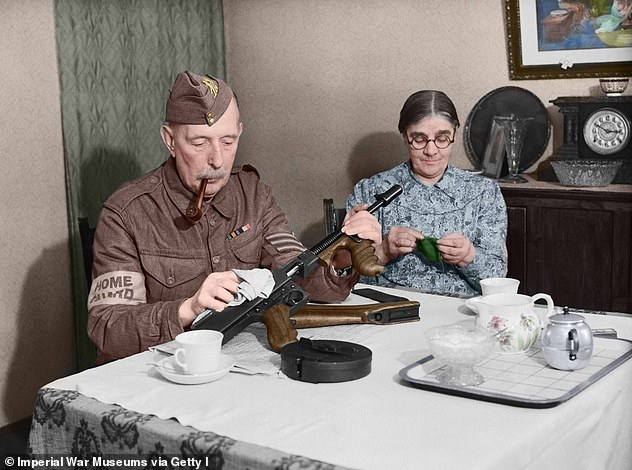 In some cases, whole families came under suspicion, with one in Rownhams, Southampton described by police as ‘all ardent members of the Fascist Party’.

A further case saw a wife report her husband on the Isle of Wight, saying he hated England and wanted to travel to Germany to take part in anti-British broadcasting.

And a blacksmith from West Wycombe, Buckinghamshire, was heard to say: ‘England is not worth fighting for; I would not hesitate to help Germans if I had a chance.’ 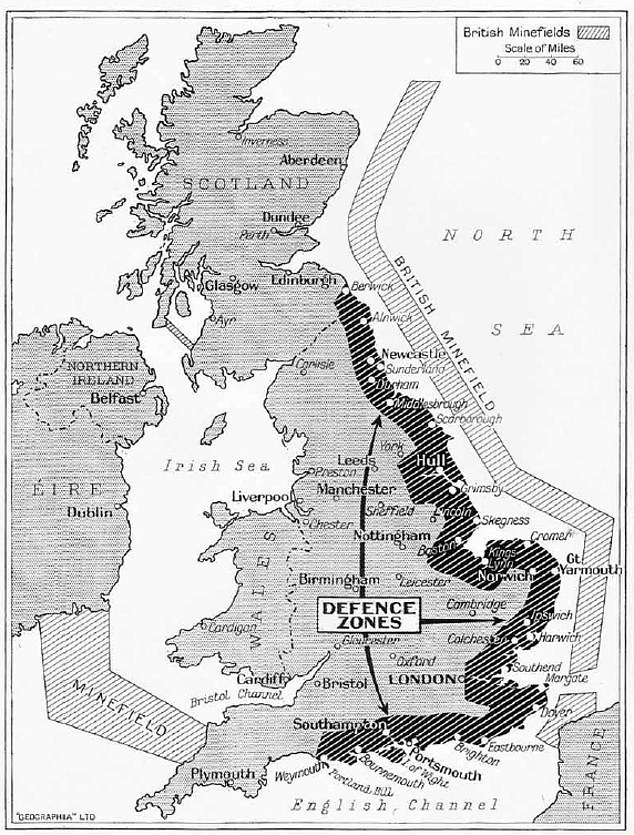 Mr Storey studied the list while researching his new book ‘Beating the Nazi Invader: Hitler’s Spies, Saboteurs and Secrets in Britain’, which came out last month.

The book looks at the context of 1940 when Hitler’s forces were camped just across the English Channel and invasion seemed both inevitable and imminent.

MI5 was inundated with tip-offs from Britons suspicious of Germans on the loose, with some malicious people trying to turn in a neighbour they had a grudge against.

Among those caught was agent Karl Meier who arrived in Kent and walked into a pub in Lydd at 9am in September 1940 before ordering a glass of cider champagne. 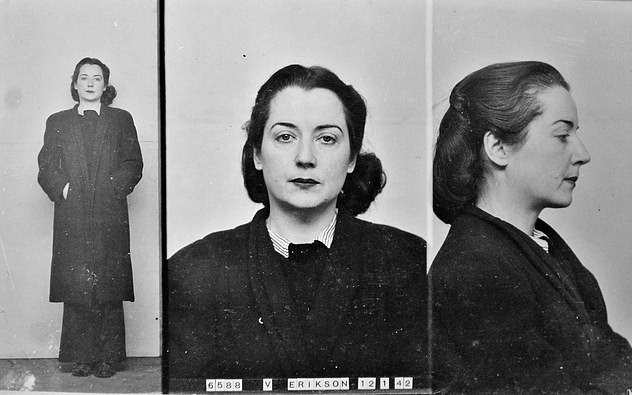 Enemy agent Vera Schalberg who was set down from a sea-plane on the Moray Firth coast in Scotland along with Karl Drücke. They walked to a nearby train station and asked the name of the station — a strange question, which concerned the stationmaster who then called police

This was despite alcohol not being served that early – and two pub regulars followed him and turned him into police. He was later convicted of spying and hanged.

Other enemy agents caught included Vera Schalberg and Karl Drücke who arrived on the Moray Firth coast from a seaplane and walked to a nearby train station.

There, they asked for its name, which the stationmaster thought was an odd query. He called the police who found a piece of German sausage in Drücke’s overcoat.

The book also looks at the growth of Nazi views within Britain in the years leading up to the war when Hitler infiltrated the UK with his huge network of spies. 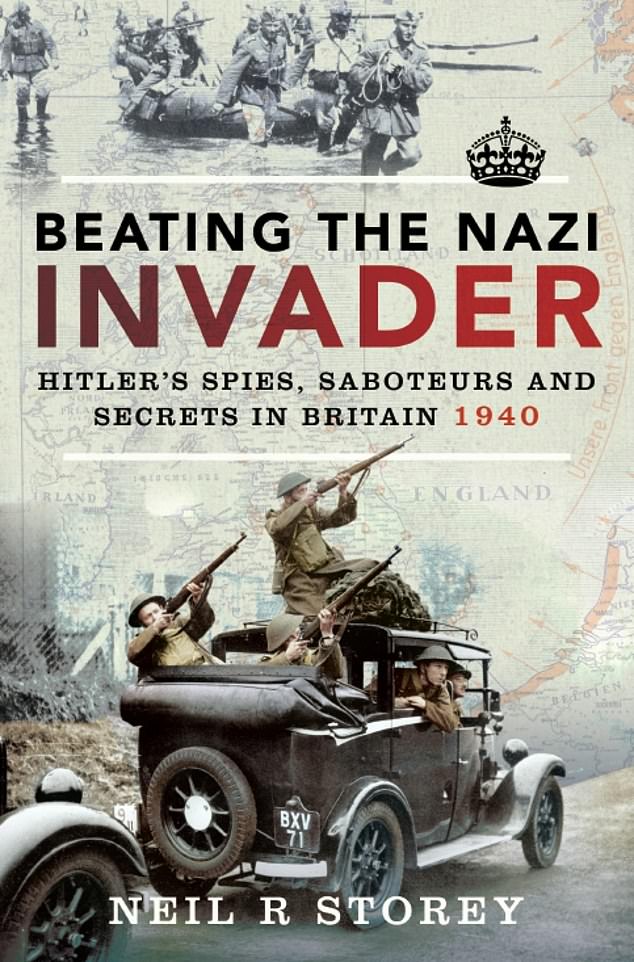 ‘Beating the Nazi Invader: Hitler’s Spies, Saboteurs and Secrets in Britain’ is by Neil Storey

It examines how, before the war, the Hitler Youth paraded down Whitehall and ran cycle tours around Britain which took them to strategic ports and industrial centres.

Undercover German agents were operating across Britain to pick up intelligence about the country, while others monitored Germans working or studying in the UK.

Among those sending details to Germany were the 25,000 German girls working as maids in private houses, and German students studying at Britain’s universities.

If the Nazis had won the war, one of the dictator’s first priorities was the arrest of those who made his Black Book.

His death squads – Einsatzgruppen – would round up anybody deemed to be a subversive, including Jews and intellectuals.

He also wanted to make Oxford the new capital, reducing London’s status to a Nazi base.

His plans for London didn’t end there – he wanted to rob it of Nelson’s Column and transport it to Berlin as a victory trophy.

Other strongholds were planned for Birmingham, Newcastle, Dublin, Liverpool and Glasgow.

Hitler’s vision for the UK also included transforming Blackpool into a resort in which his troops could unwind.

The plans explain why a town that built hundreds of Wellington Bombers remained largely untouched in the Blitz.

The leader wanted to snatch Blenheim Palace as his own home. His nemesis Winston Churchill had lived there as a boy.

He also wanted to depose George VI in favour of Edward VIII, who had visited him before the war’s outbreak.