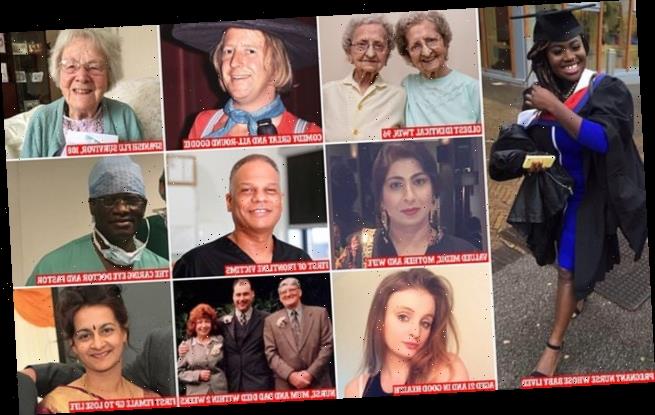 ‘Fathers and mothers, brothers and sisters, sons and daughters…’: Boris Johnson offers his ‘deepest condolences’ to families of more than 100,000 Britons who have now lost their lives to Covid

Hilda Churchill, 108, is believed to be the UK’s oldest coronavirus victim.

The great-grandmother, who survived two world wars and the Spanish flu, died in a Salford care home in March – less than 24 hours after she tested positive for the virus.

Her grandson Anthony, 49, said: ‘The most devastating thing is that we were not able to be there with her in her time of need.’

Hilda Churchill, 108, is believed to be the UK’s oldest coronavirus victim

Tim Brooke-Taylor – one third of the anarchic Goodies and a long-time favourite on the Radio 4 panel game I’m Sorry I Haven’t A Clue – died in April aged 79.

Fellow Goodie Bill Oddie called him a ‘true visual comic and a great friend’ and third member Graeme Garden said he was ‘terribly saddened by the loss of a close friend of over 50 years’.

The trio met in the Cambridge Footlights in the 1960s before developing their surreal style. Brooke-Taylor, a Derbyshire native, received an OBE in 2011. 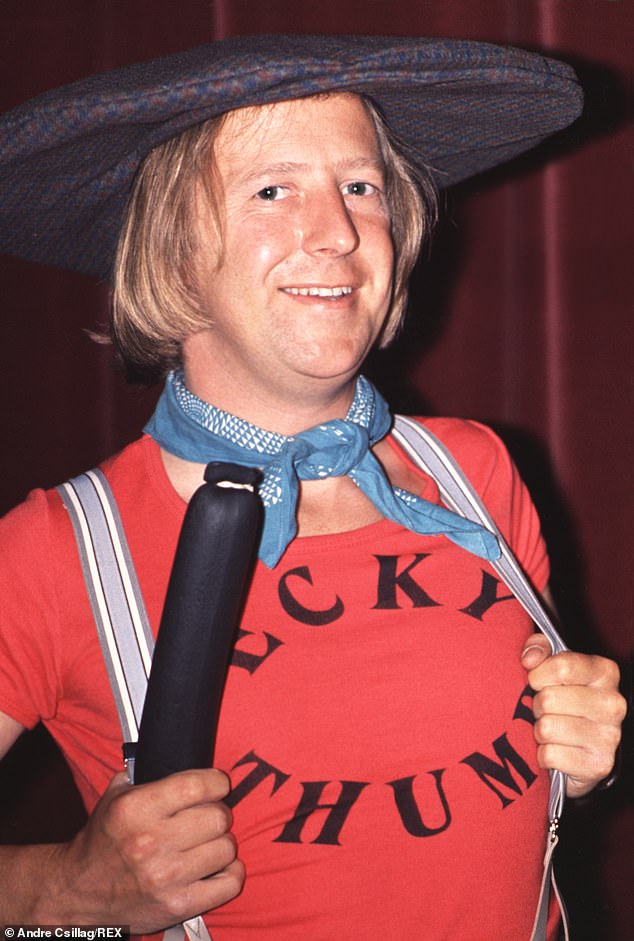 Dr Poornima Nair, 56, is believed to have been the first female GP to die from virus.

The mother-of-one, who worked in Bishop Auckland, County Durham, was admitted to hospital on March 20 and died on May 12. She is not thought to have had any underlying health issues.

Her son, Varun, described her as a loving mother who ‘lived life to the fullest and spread joy and positivity to everyone that came in contact with her’. He said: ‘Her limitless love for her family, friends and patients can never be replaced.’ 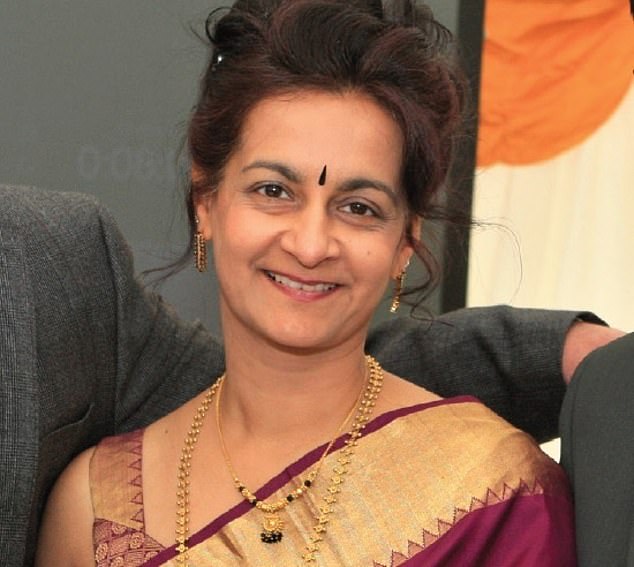 Dr Poornima Nair, 56, is believed to have been the first female GP to die from virus

Aged 21 and in good health

At 21, Chloe Middleton was one of the youngest and earliest victims of the pandemic in March.

Her family said she had no underlying health issues and urged others to ‘do their bit’ to stop the spread.

Her age and health status convinced many younger people to take the virus seriously as Britain was plunged into its first national lockdown. 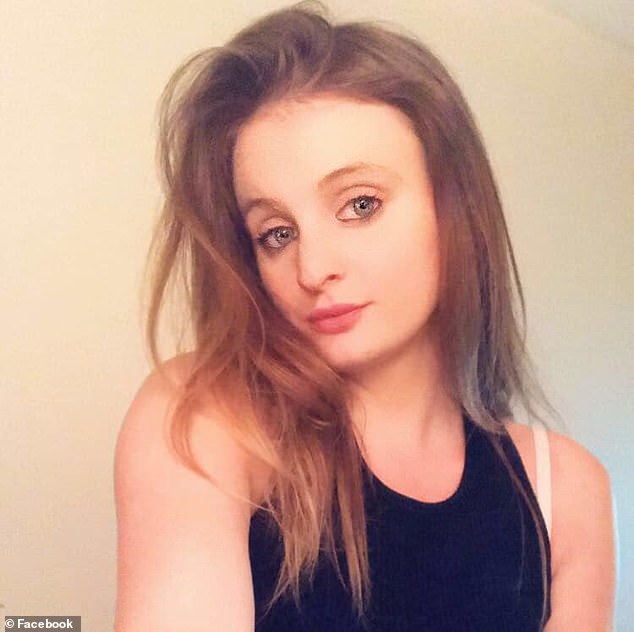 At 21, Chloe Middleton was one of the youngest and earliest victims of the pandemic in March

She was not tested for Covid-19 when admitted to Wexham Park Hospital in Slough, Berkshire, but her death certificate recorded Covid-19 as the cause.

At the time, Chloe’s aunt Emily Mistry, said: ‘My beautiful, kind-hearted 21-year-old niece has passed away from Covid-19.

‘She had no underlying health conditions.’ She added that the family was ‘shattered beyond belief’.

Mary Agyeiwaa Agyapong was heavily pregnant when she died after contracting coronavirus – but incredibly, her baby was saved

Mary Agyeiwaa Agyapong was heavily pregnant when she died after contracting coronavirus – but incredibly, her baby was saved.

The 28-year-old, who ‘devoted her life to the NHS’, worked as a nurse at Luton and Dunstable University Hospital until she was signed off sick with shortness of breath in April.

Her condition deteriorated after she tested positive for coronavirus and she was taken to theatre for an emergency caesarean section.

Her baby, who was born five weeks early, survived but Miss Agyapong died five days later. Her husband Ernest Boateng is campaigning for extra protection for expectant mothers and has written to Boris Johnson.

‘I don’t want any family to have to go through the kind of trauma me and my kids are going through,’ he said.

As Britain’s oldest identical twins, Doris Hobday and Lilian Cox, 96, won admirers not just for their age but also their wicked sense of humour.

They tested positive for Covid-19 earlier this month and Mrs Hobday died on January 5, while her sister recovered. Mrs Cox said: ‘These things happen for a reason but it’s not fair. We came into the world together. She was two hours older than me and we shared everything.’

For years the Tipton Twins worked in the same West Midlands factories and lived in the same street. On their 95th birthday Mrs Cox joked that her sister’s secret to a long life was ‘no sex and plenty of Guinness’. 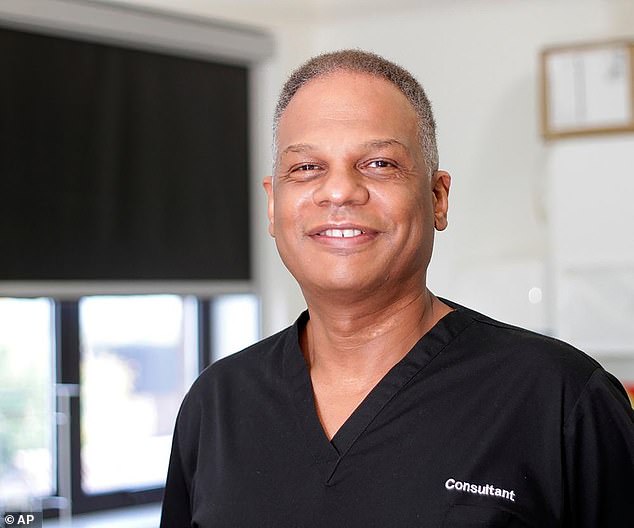 Amged El-Hawrani, 55, an ear, nose and throat specialist at Queen’s Hospital in Burton, Staffordshire, was the UK’s first frontline hospital doctor to die from coronavirus

Amged El-Hawrani, 55, an ear, nose and throat specialist at Queen’s Hospital in Burton, Staffordshire, was the UK’s first frontline hospital doctor to die from coronavirus.

The consultant, who had been volunteering in A&E, died in March after three weeks in critical care.

They added: ‘Life without Amged is impossible to imagine but together, we will do all we can to honour his memory.’ 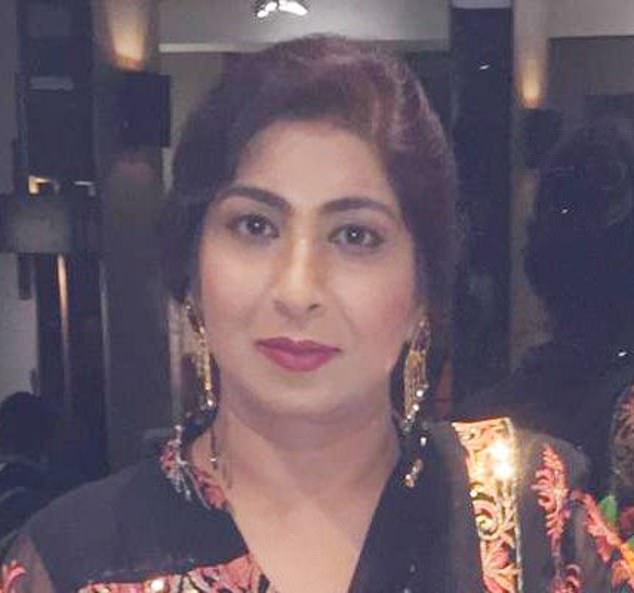 Dr Mamoona Rana, 50, a psychiatry registrar, is believed to be the first British-Pakistani doctor to die from Covid-19

Dr Mamoona Rana, 50, a psychiatry registrar, is believed to be the first British-Pakistani doctor to die from Covid-19.

Her husband Azeem Qureshi, also an NHS doctor, described how his wife’s condition rapidly deteriorated after she caught the disease and was put on a ventilator. She died on April 16.

Dr Qureshi said: ‘She was the loveliest wife and mother of our daughter. She was unique in her poise, grace, intelligence, soft nature and beauty. I will miss her forever.’

North East London Foundation Trust said she was a ‘highly-regarded and enormously valued’ doctor who would be ‘hugely missed’.

Dr Peter Weller, who taught Dr Rana at London’s City University, said she was popular and ‘dedicated to being a doctor’.

The caring eye doctor and pastor 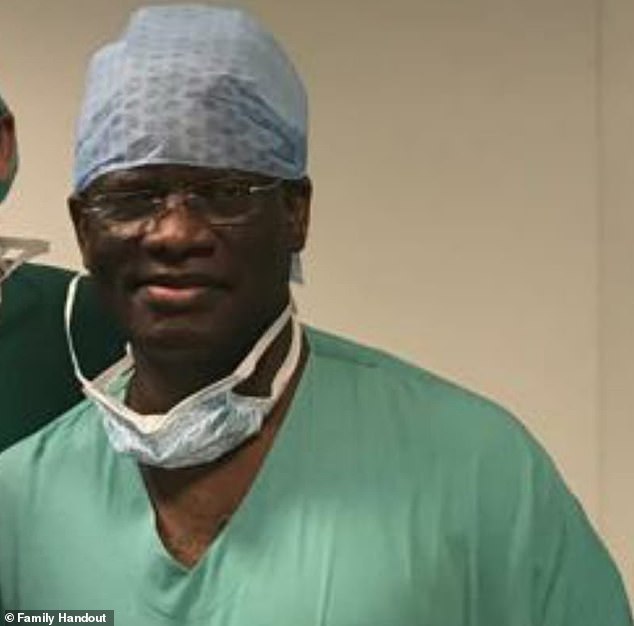 Ophthalmologist Dr Paul Kabasele, 58, died in April after fighting the virus for a month in hospital

A ‘truly gifted’ eye doctor who warned others not to underestimate coronavirus succumbed to the disease himself.

Ophthalmologist Dr Paul Kabasele, 58, died in April after fighting the virus for a month in hospital.

Dr Kabasele, who had worked at Croydon Hospital for a decade, was also a Christian pastor and used his sermons to urge his congregation in south-east London to take the virus seriously.

He also worked to improve the eye health of people in the Democratic Republic of Congo, his home country, and was working with University College London on research into uveitis, a rare eye condition. 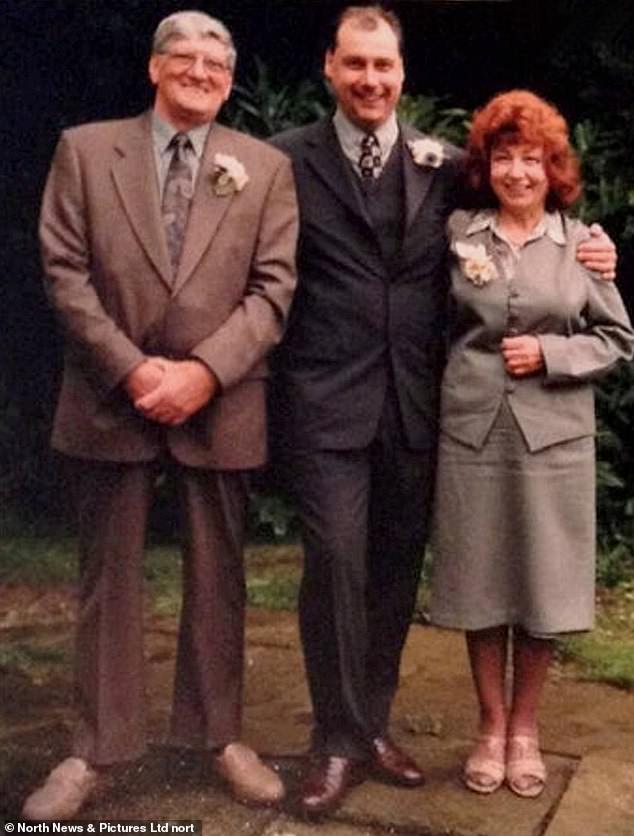 Nurse Keith Dunnington pictured with his parents Lillian and Maurice

A ‘popular and hard-working’ nurse died from the virus weeks before his parents.

Keith Dunnington, 54, who worked for the NHS for more than 30 years, died at his parents’ home in South Shields, Tyne and Wear, in April.

Hospital staff aided the ‘inseparable’ couple in their final moments by pushing their beds together so they could hold hands.

Mourners lined the streets for the joint funeral of the father-of-two and his parents.

Mr Dunnington’s cousin Debbie Harvey said at the time: ‘Keith gave 200 per cent to everything he did. He looked after people so well and stood up for them.’

I am so deeply sorry: Boris Johnson apologises for lives lost as UK death total from Covid-19 reaches 100,000

Boris Johnson said he was ‘deeply sorry for every life lost’ last night as the UK went past 100,000 coronavirus deaths.

In a sombre press conference, he said he took ‘full responsibility’ for every action his Government had taken in the pandemic.

He insisted ministers had done ‘everything we could’ to limit the fatalities but admitted it was ‘hard to compute the sorrow’ behind the death toll. The UK is the first country in Europe to reach the grim milestone.

Describing it as ‘an appalling and tragic loss of life’, an emotional Mr Johnson said each victim was a father, mother, brother, sister, son, daughter or grandparent. And he acknowledged that many relatives mourned ‘without the chance to even say goodbye’. The Prime Minister said the country would have time to ‘learn lessons, reflect and repair’ at the end of the crisis, which was now in sight thanks to the roll-out of vaccines.

And he said the nation would then come together ‘to remember everyone we lost, and to honour the selfless heroism of all those on the front line who gave their lives to save others’. 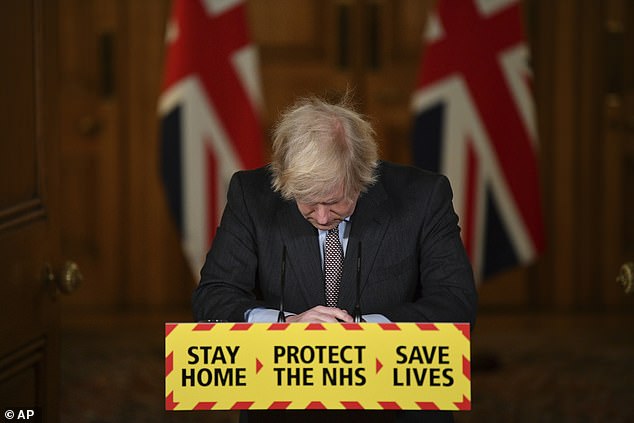 Boris Johnson said he was ‘deeply sorry for every life lost’ last night as the UK went past 100,000 coronavirus deaths

Mr Johnson added: ‘On this day I should just really repeat that I am deeply sorry for every life that has been lost and, of course, as I was Prime Minister I take full responsibility for everything that the Government has done.

‘What I can tell you is that we truly did everything we could, and continue to do everything that we can, to minimise loss of life and to minimise suffering in what has been a very, very difficult stage, and a very, very difficult crisis for our country. And we will continue to do that, just as every government that is affected by this crisis around the world is continuing to do the same.’

He added: ‘I offer my deepest condolences to everyone who has lost a loved one: fathers and mothers; brothers and sisters; sons and daughters and the many grandparents who have been taken.’

The 100,000 death toll is five times the 20,000 once described as a ‘good outcome’ by the Government’s chief scientific adviser, Sir Patrick Vallance. The UK is only the fifth country to lose so many lives, after the much larger United States, Brazil, India and Mexico.

Labour’s Sir Keir Starmer described the death toll as a ‘national tragedy’ and accused Boris Johnson of being ‘behind the curve at every stage’ when responding to the pandemic, particularly on testing, PPE and imposing lockdowns. 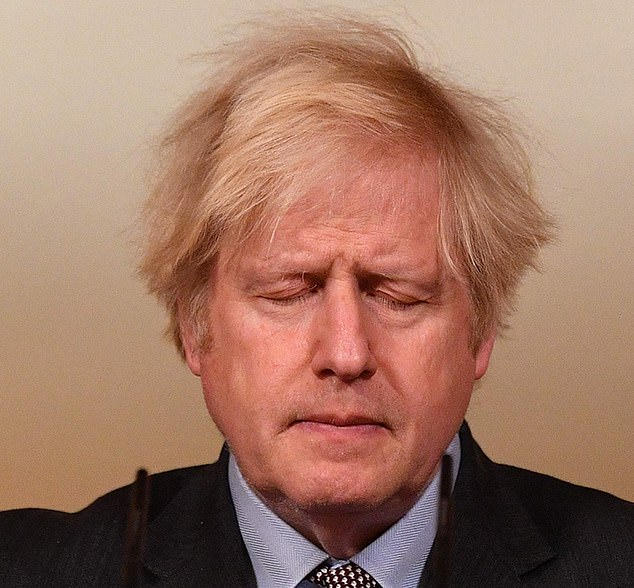 In a sombre press conference, he said he took ‘full responsibility’ for every action his Government had taken in the pandemic

Another 1,631 deaths were recorded within 28 days of a positive coronavirus test yesterday, taking the total to 100,162.

As the Prime Minister warned the EU not to interfere with UK vaccine shipments: 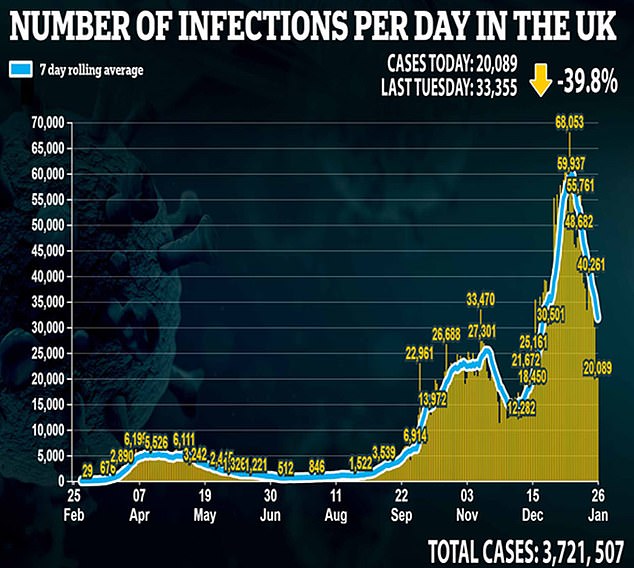 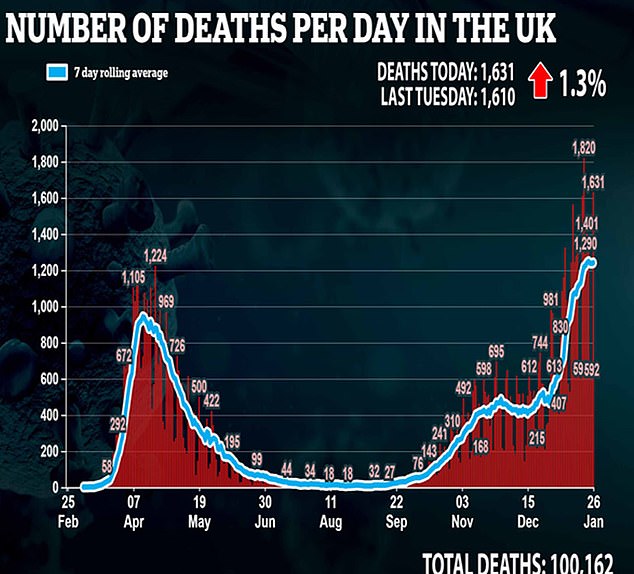 Chris Whitty yesterday warned that deaths were likely to remain high for the next few weeks, before the effects of the vaccine were felt.

He added: ‘We need to be careful that we do not relax too early. The number of people in hospital with Covid is still an incredibly high number – over 35,000.’

The professor said hospital cases were decreasing in areas including London and the South East but not in some other regions.

Critics have blamed failures to close the borders, an ineffective test and trace system as well as entering lockdowns too late for allowing the virus to become endemic.

An ageing population and a well-documented obesity crisis are also thought to have left Britain susceptible to the virus.

Health Secretary Matt Hancock said each death was ‘heartbreaking’ but jabs ‘offer the way out’. 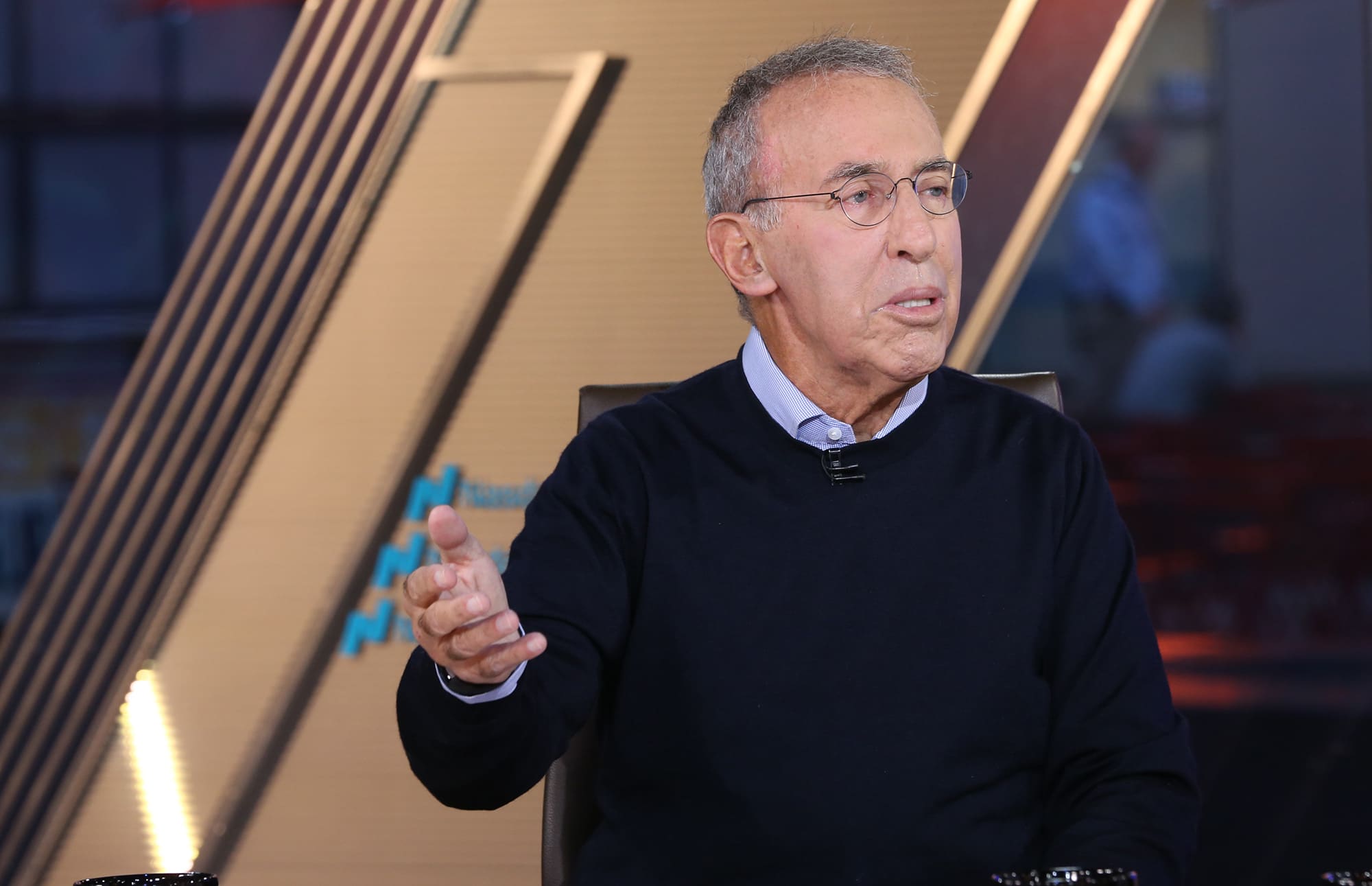 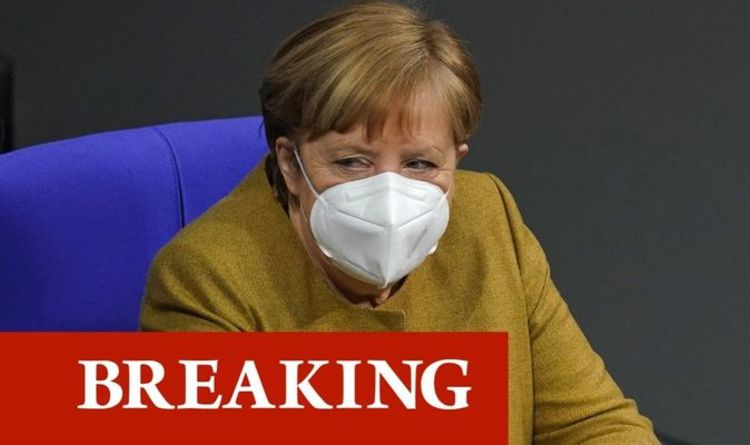