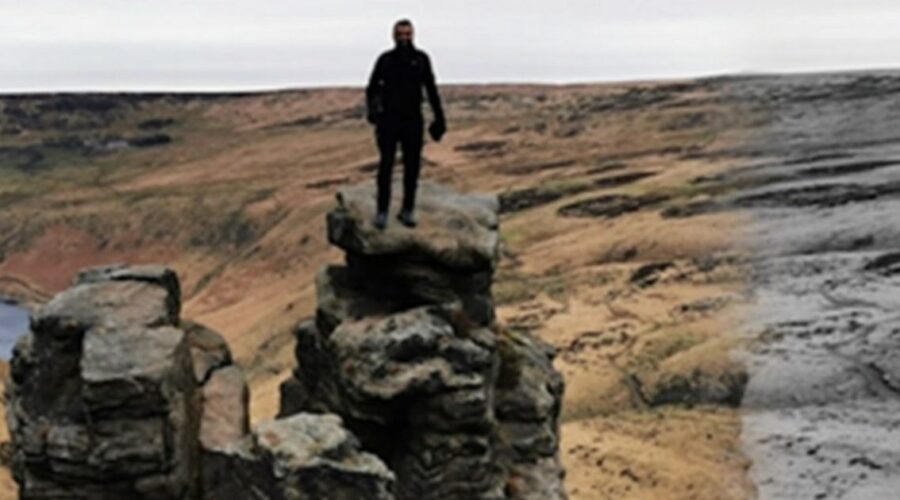 A dad fell 200ft down a cliff just moments after posing for a photo while training for a hike.

Imran Choudhury, 36, was out walking near Dovestones reservoir in the Peak District, Cumbria, in February.

Two people took his photo at the Trinnacle landmark, a series of rock formations.

Mr Choudhury began climbing off it before plummeting down the hill, Yorkshire Live reports.

He said: "It was a very steep climb and I was walking against the wind that day. I took lots of photos and videos and went to the Trinnacle where two people took my photo.

"I did a live video for social media and actually said at the end of it, if someone fell from here that would be the end for them. I started to climb down and that’s the last thing I remember."

As Nadine climbed down to help Imran, Carly called for help and another couple, Caroline and Paul, also offered to assist.

Paul managed to brave the descent to Imran’s aid and stayed with him throughout his rescue.

He was stuck on a 50-degree slope in the ravine.

Yorkshire Air Ambulance dispatched their helicopter, with extremely strong winds making the rescue mission one of the team's most challenging ever.

Paramedic James Allen recalled: "It was blowing a gale and the ground was crumbling away in places. If any of us had lost our footing, it would have been game over."

A Search and Rescue helicopter was also sent out and was eventually able to winch Imran to safety.

He was then flown to Sheffield Northern General Hospital by the waiting Yorkshire Air Ambulance helicopter.

Imran had broken two skull bones, one of which penetrated his brain and caused serious internal bleeding.

He also broke his shoulder, shoulder blade, spinal bone, a small bone in his leg left, and badly damaged his right leg in six places. Imran spent three weeks in an induced coma.

Before the accident, he had hoped to go on a walk to raise funds for the NHS.

Imran is still undergoing treatment for his injuries and has praised the people who came to his rescue that day.

"They are my angels who saved me. I’m so grateful for their help. It was a very challenging rescue and it’s amazing what they did to save me."

Imran's story will feature on Critical Hour on Channel Really at 10pm on August 31.