A New York appeals court upheld Harvey Weinstein´s rape conviction and 23-year prison sentence on Thursday, rejecting the movie mogul´s claims that the judge at his landmark #MeToo trial prejudiced him by allowing women to testify about allegations that weren´t part of the criminal case.

The ruling by a five-judge panel in the state´s intermediate appeals court affirmed one of the highest-profile verdicts to date in America´s reckoning with sexual misconduct by powerful figures – an era that began with a flood of allegations against Weinstein.

Weinstein´s publicist, Juda Engelmayer, said he is reviewing his options and will seek to appeal the decision to the state´s highest court, the Court of Appeals.

‘We are disappointed, but not surprised,’ Engelmayer said.

Weinstein, 70, was convicted in New York in February 2020 of a criminal sex act for forcibly performing oral sex on a TV and film production assistant in 2006 and raping an aspiring actress in 2013.

He was acquitted of rape and predatory sexual assault stemming from actor Annabella Sciorra´s allegations about an encounter in the mid-1990s. The Associated Press does not generally identify people alleging sexual assualt unless they consent to be named; Sciorra has spoken publicly about her allegations. 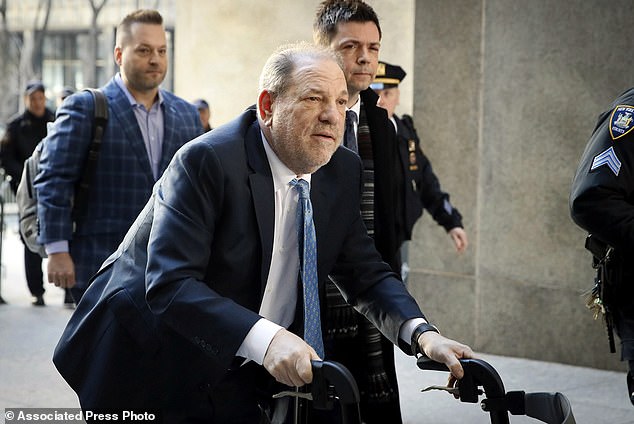 Harvey Weinstein arrives at a Manhattan courthouse as jury deliberations continue in his rape trial in New York, on Feb. 24, 2020. A New York appellate court on Thursday, June 2, 2022, has upheld Weinstein’s rape conviction, rejecting the disgraced movie mogul’s claims that the judge at the landmark #MeToo trial prejudiced him by allowing women to testify about allegations that weren’t part of the criminal case

Weinstein is jailed in California, where he was extradited last year and is awaiting trial on charges he assaulted five women in Los Angeles and Beverly Hills from 2004 to 2013.

In a 45-page ruling, the appellate court said trial Judge James Burke properly exercised his discretion in allowing prosecutors to bolster their case with testimony from three women who accused Weinstein of violated them but whose claims did not lead to charges in the New York case.

The judges said that although the volume of material, pertaining to 28 alleged acts over 30 years, was ‘unquestionably large, and, at first blush, perhaps appears to be troublingly so,’ Burke properly exercised his discretion in weighing its relevance to the case.

The judges had been far more critical during oral arguments in December, questioning a number of Burke’s rulings, including one that cleared the way for prosecutors to confront Weinstein with evidence about other, unrelated misbehavior if he had testified.

The judges, echoing concerns from Weinstein´s lawyers, said at the time that the ruling had effectively muted his defense.

On Thursday, the panel also rejected Weinstein´s argument that Burke was wrong in other ways: by allowing a woman who had written a novel involving predatory older men to remain on the jury, and by letting prosecutors have an expert on victim behavior and rape myths testify. Burke did not allow testimony on similar subjects from defense experts.

Weinstein´s conviction, heralded by activists and advocates as a milestone achievement, was dissected just as quickly by defense lawyers seeking to spring him from what could be the rest of his life behind bars.

Rules on calling additional witnesses to testify about ‘prior bad acts’ vary by state and were an issue in Bill Cosby´s successful appeal of his sexual assault conviction in Pennsylvania.

New York´s rules, shaped by a decision in a 1901 poisoning case, are among the more restrictive.

At the December appeals court hearing, Weinstein´s lawyers argued the extra testimony went beyond what´s normally allowed – detailing motive, opportunity, intent or a common scheme or plan – and essentially put the ex-studio boss on trial for crimes he wasn´t charged with and hadn´t had an opportunity to defend himself against.

Burke´s ruling, which allowed prosecutors to use stories from Weinstein´s past to attack his credibility, worked to prevent him from taking the witness stand, Weinstein lawyer Barry Kamins told the appellate panel at the December hearing.

‘The jury was overwhelmed by such prejudicial, bad evidence,’ Kamins argued. ‘This was a trial of Harvey Weinstein´s character. The people were making him out to be a bad person.’