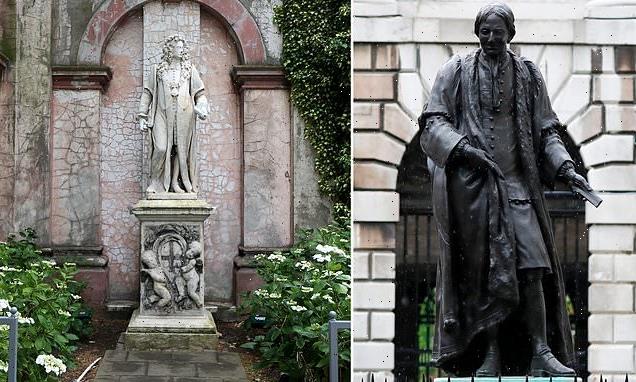 Guy’s Hospital has confirmed it will move a statue of its founder Thomas Guy to a less prominent position because of his links to Britain’s slave trade after facing pressure from Black Lives Matter protests.

The decision has been agreed by the hospital’s charitable foundation despite its consultation revealing that 75 per cent of those who responded felt the statue should remain in place.

In a statement issued with their report, the foundation said the gesture was proposed in a bid to ‘address the legacies’ of slavery and to make the hospital ‘more welcoming to everyone’.

A separate statue of hospital benefactor Sir Robert Clayton, who also has links to Britain’s colonial past, will remain in place as it was decided the position was less prominent.

But the foundation confirmed both statues will be displayed with accompanying plaques detailing their ties to the slave trade.

It comes as Goldsmiths University of London launched public consultation on plans to remove four statues including Lord Nelson and Francis Drake. 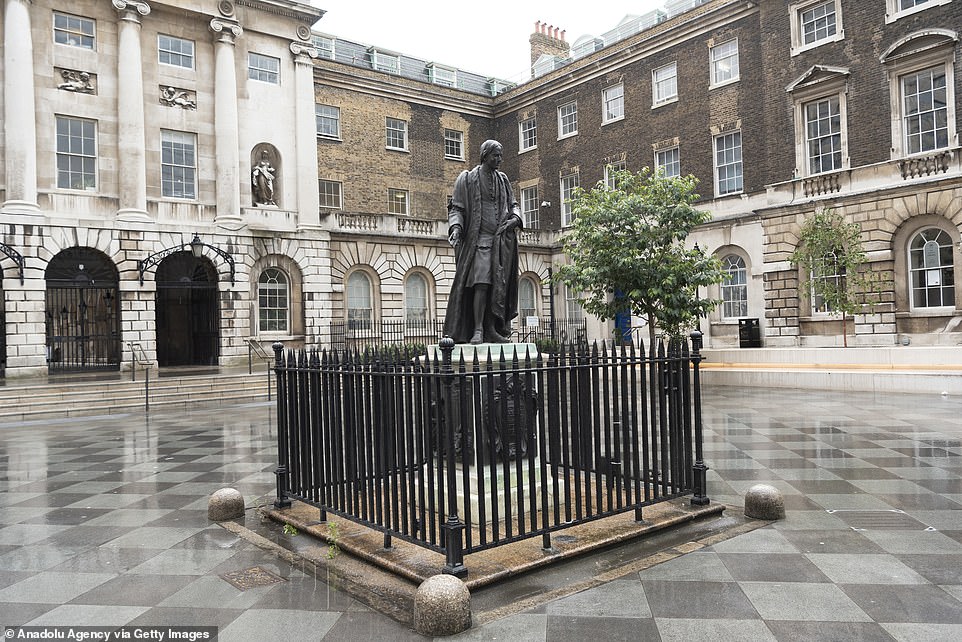 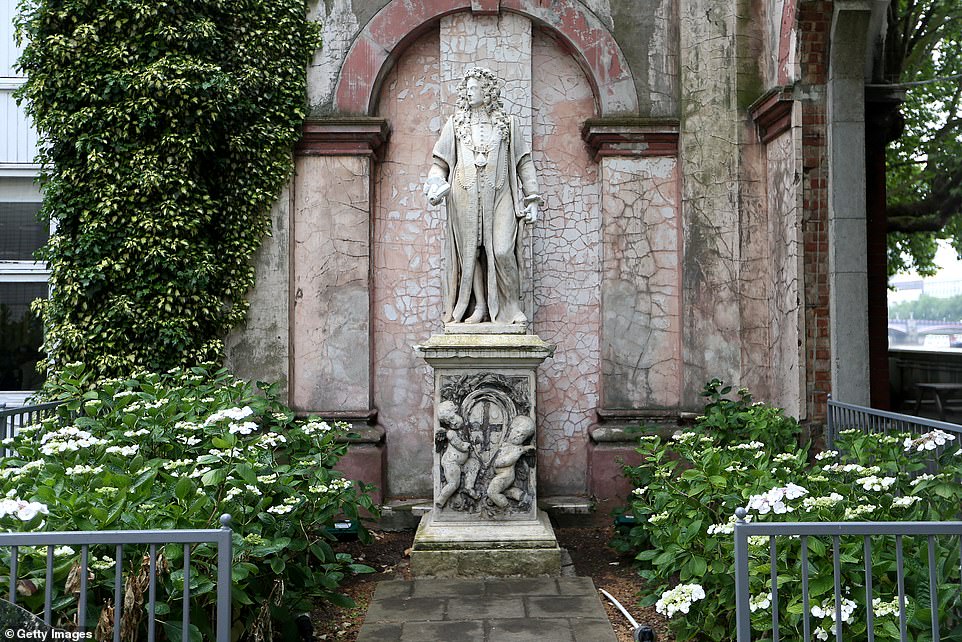 The statues first came under fire in June 2020 when they were both boarded up after BLM protestors launched the Topple the Racists campaign.

As a result, both statues were boarded up by the hospital foundation over fears they would be targeted by anti-racism protestors until bosses could decide what should be done with them on a permanent basis.

Bookseller Guy made his fortune as a major shareholder in British slave-trafficking firm South Sea Company. He sold his shares for £250,00 – the equivalent of £400million in modern-day prices – and founded Guy’s Hospital near London Bridge in 1721.

A second statue depicting Robert Clayton will be taken down from St Thomas’s hospital – where Boris Johnson was admitted with coronavirus in April – near Westminster Bridge. Clayton was part of the Royal African Company who shipped African slaves to the Americas.

The hospitals are both part of the same trust. 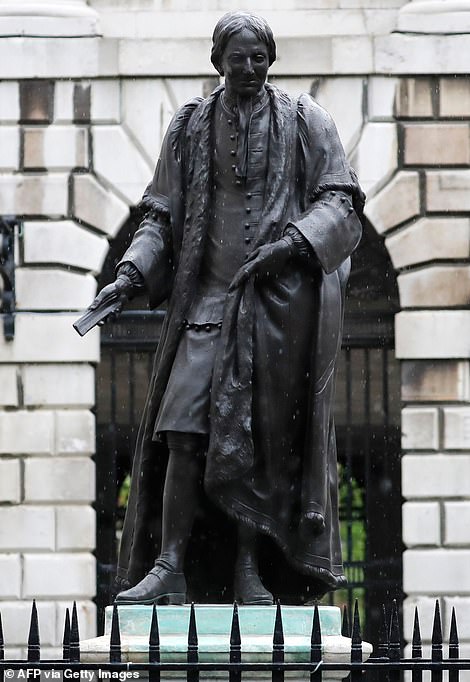 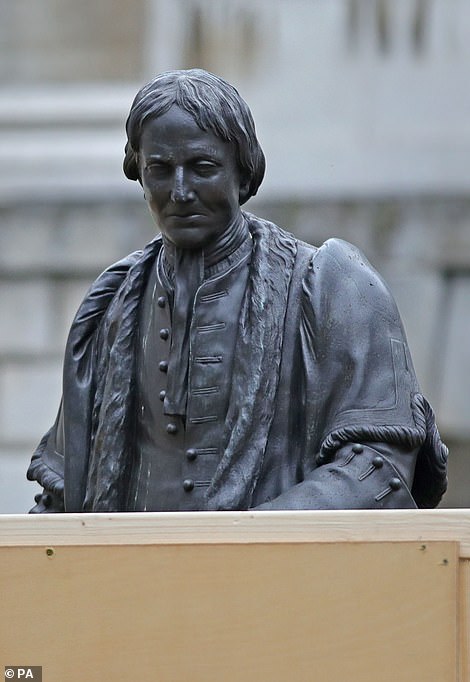 Pieces of wood were erected around the statue, in Guy’s Courtyard, next to the intentionally-renowned hospital last year 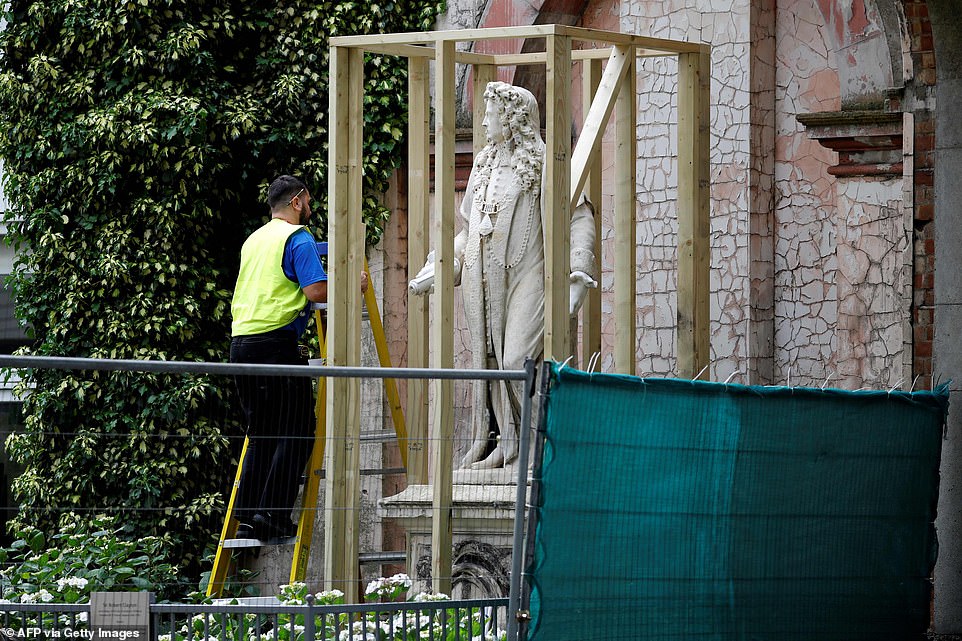 Thomas Guy (1644 – 1724) was a British bookseller, stock speculator, governor of St Thomas’ Hospital and founder of Guys’ Hospital, London – which he built with profits from the slave trade.

He made his fortune through ownership of £42,000-worth of shares in the South Sea Company, whose main purpose was to sell slaves to the Spanish colonies.

The South Sea Company was responsible for the transportation of around 64,000 enslaved Africans between 1715 and 1731 to Spanish plantations in Central and Southern America.

After selling his shares in South Sea Company for £250,000, the equivalent of £400million in modern-day prices, Guy used his massive fortune to establish Guy’s Hospital for ‘the poorest and sickest of the poor’ in London, at a cost of £19,000.

Before opening Guy’s, in Southwark, central London, he created almshouses and became a governor of the nearby St Thomas’s Hospital after paying for the cost of three new wards.

He died in 1724 and his will was so complex and so high in value that an Act of Parliament was needed to enact it, and he left nearly £220,000 to the hospital.

The bulk of his estate was left in trust to complete work on the hospital, while a further sum was set aside for the release of prisoners in the capital who owed debts.

At the time, the trust said it recognised the ‘public hurt and anger that is generated by the symbolism of public statues of historical figures associated with the slave trade’ and that it had a duty to address ‘the legacy of colonialism, racism and slavery in our work’.

At the same time, protestors called for dozens of statues of historic figures to be torn down, an action that was sparked by the toppling of the Edward Colston statue in Bristol.

Colston’s statue was toppled by a crowd amid growing tensions about Britain’s colonial past, sparked by global outcry following the death of George Floyd in the US.

Floyd was killed when white police officer Derek Chauvin pressed his knee into his neck for eight minutes and 46 seconds despite his desperate pleas that he ‘can’t breathe’. He passed out and later died in Minneapolis on May 25.

His death is seen as a symbol of systemic police brutality against African-Americans sparking outrage and largely-peaceful protests first across the US before quickly spreading worldwide.

Since the movement grew in intensity, organisations have been looking at ways to address the country’s colonial history and the reminders left behind in the form of statues, school and university names and many other aspects of public life.

The trust has said the changes to St Guy’s and St Thomas’ statues is subject to planning permission.

Critics accused the Guy’s and St Thomas’ Foundation of ‘cultural vandalism’ and claimed they had ignored public opinion about whether the statues should stay or go.

Robert Poll, who runs the Save Our Statues campaign, said that the body had ‘ignored the public’ by deciding to move the Thomas Guy statue.

His comments came after 75 per cent of respondents to an online questionnaire that was part of the consultation said that the statue should stay. 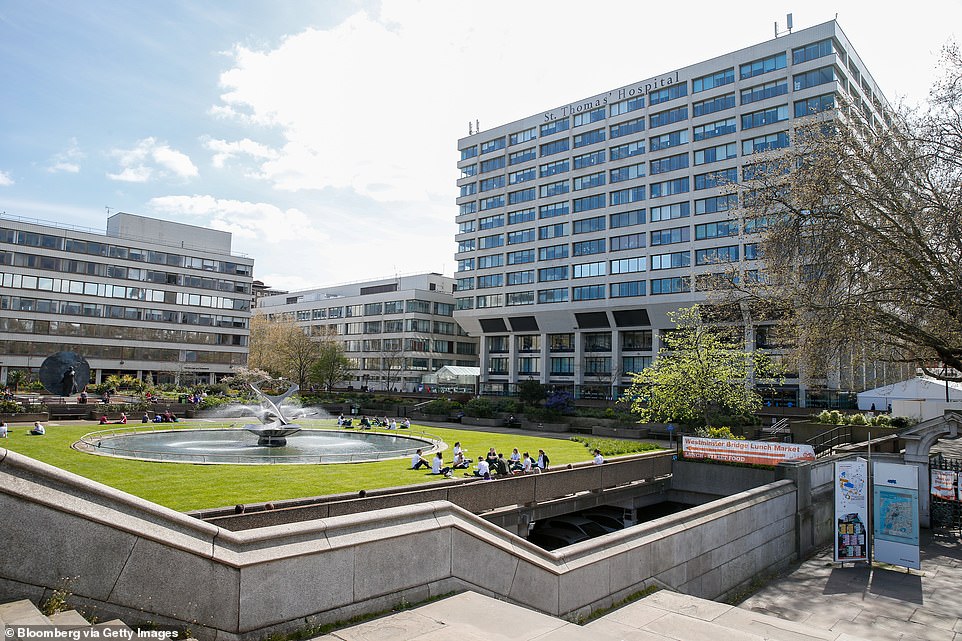 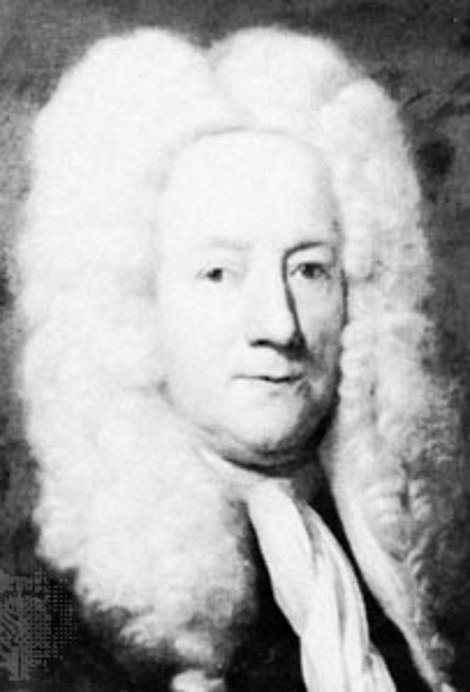 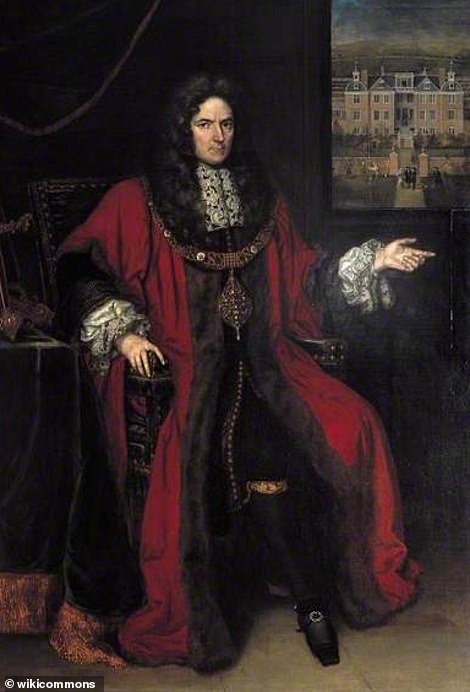 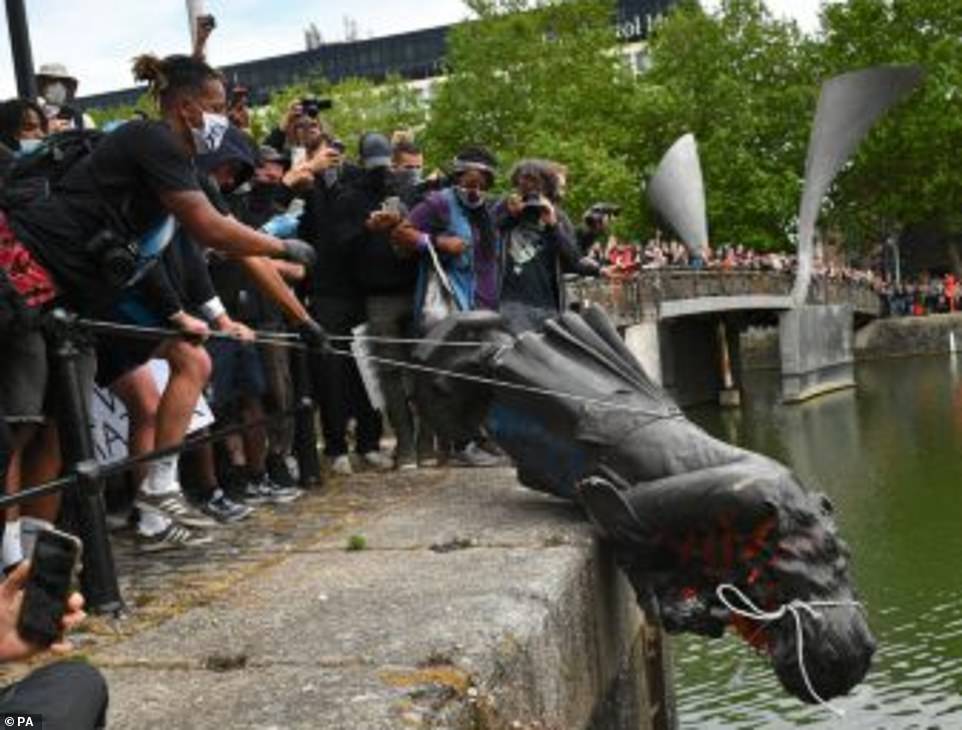 The toppling of the Edward Colston statue in Bristol last June (pictured) sparked a movement in the UK that called for the removal of any statue, monument or reference to historic figures from the country’s past that had links to its colonial history

But the consultation authors said that the campaign group’s supporters dominated the responses, skewing the results.

Robert Poll, who runs the Save Our Statues campaign, said: ‘asked the public. 3,200 people responded. 75 per cent said to keep the statue where it is. Once again the public is ignored.’

The report showed that 75 per cent of respondents to the consultation said that the statue should stay but the independent authors said the campaign group’s supporters dominated the responses and skewed the results.

Kieron Boyle, the trust’s Chief Executive, says: ‘Like many organisations in Britain, slavery is part of our history, and we believe we have a duty to address its legacies.

‘The consultation has recommended that we retain both statues in the public realm, provide information explaining how both men made their wealth, and move one of the statues to a less prominent position.

‘It has also suggested that we commission new artistic works to tell the rich story of those involved in the hospitals’ history. 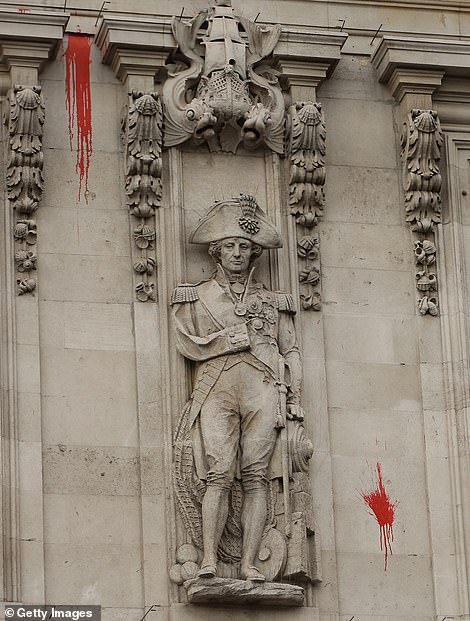 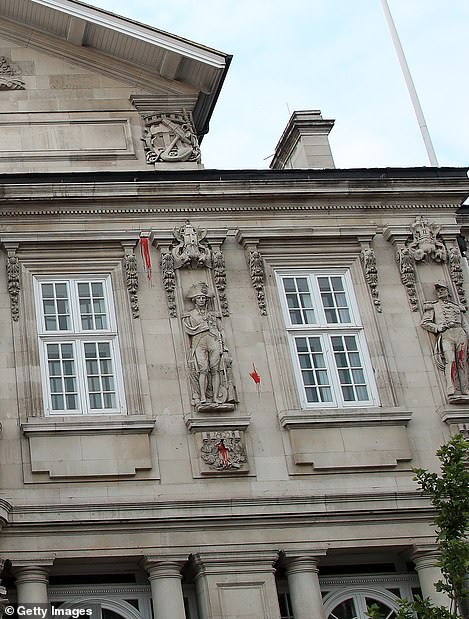 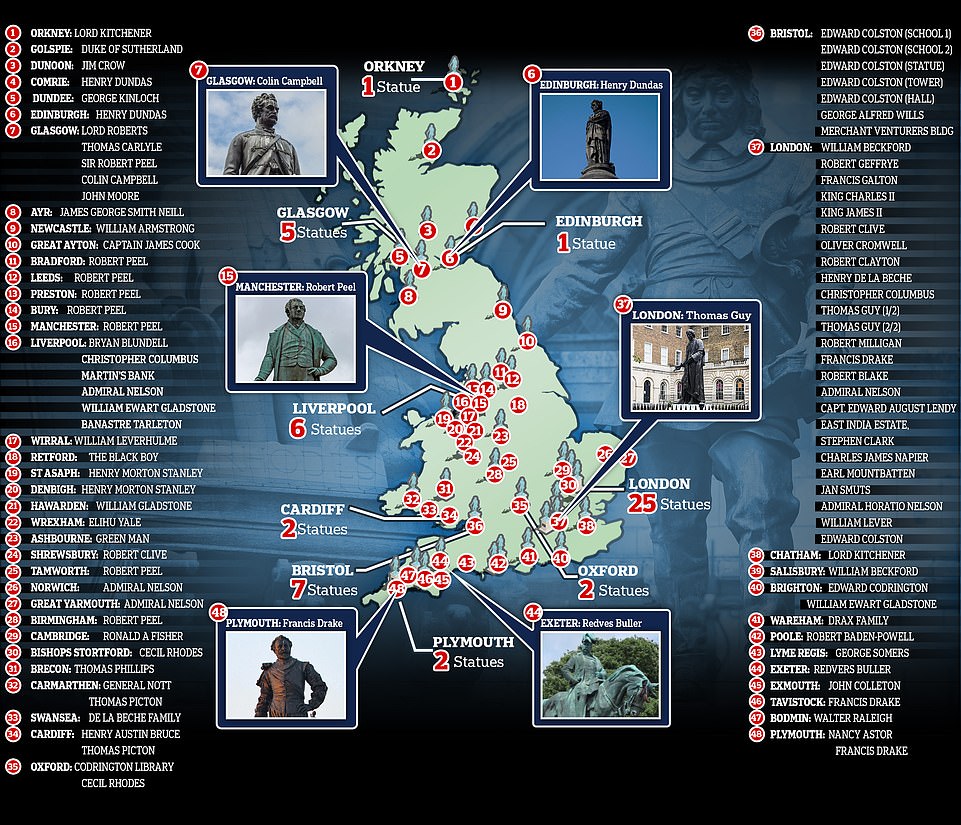 ‘We recognise that these can be polarising debates and are grateful for the wide range of views that shaped these independent recommendations. We are committed to seeing all the changes through.’

Other examples of changes made as a result of the movement include the removal of several monuments to slave trader Edward Colston in Bristol, the alteration of the name of the David Hume tower in Edinburgh and the renaming of Gladstone Hall at Liverpool University.

Meanwhile, Goldsmiths University in London has, today, launched a consultation over the future of four of its statues including one of Lord Nelson and another of Francis Drake at Deptford Town Hall.

The Nelson statue at Deptford Town Hall was streaked in red paint either side of it last June, with protesters targeting the naval hero over claims that he was a white supremacist and was against the abolition of slavery.

The four statues in niches on the front of Deptford Town Hall are Sir Francis Drake, Robert Blake, Lord Horatio Nelson, and a representative naval figure from the early 20

century. The figures depict the naval history of Britain with Deptford’s ‘nautical associations’ providing the inspiration for the statues, according to Historic England.

The university says it does not have a ‘policy position’ on the statues and is opening the consultation to the public to determine their future.