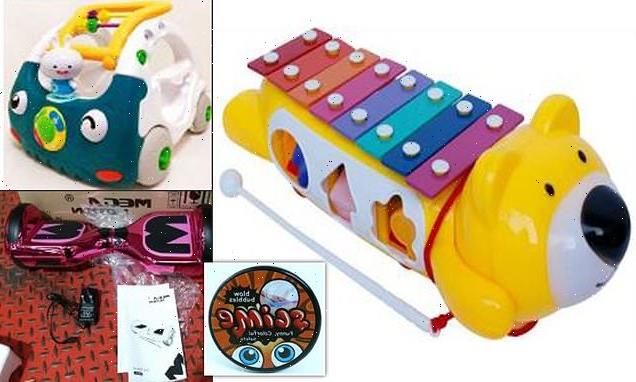 The ‘DEADLY’ Christmas toys of 2021: Office for Product Safety issues list of dangerous children’s gifts from TOXIC slime to bear-shaped xylophone that poses risk of STRANGULATION

Parents are being urged to double check that none of these dangerous toys are hiding under the Christmas tree this year.

Among the products exposed by the Office for Product Safety & Standards’ pre-Christmas crackdown were two brands of slime toys.

‘Glacier slime’ and ‘Ninja slime’ were both found to contain toxic levels of boron – which can harm children’s reproductive systems if ingested.

Ninja slime, despite containing 701 mg/kg of boron, comes with a straw and instructions that encourage children to ‘blow bubbles’ with the toxic goo – increasing the risk of accidental ingestion.

‘Ninja slime’, one of the dangerous toys uncovered by the government probe into hazardous toys, contains toxic levels of boron – and yet comes with a straw and instructions that encourage children to blow bubbles with it, increasing the risk of accidental ingestion

A toy called ‘baby doll in bathtub shower set’, a role playing game for children, was flagged as having ‘an excess concentration’ of cancer-causing agents. 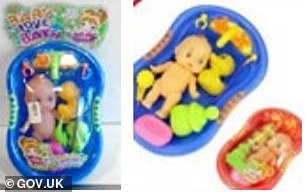 The product safety report reads: ‘A young child playing with the toy is exposed to phthalates which can potentially harm a child’s health either via cancer or non-cancer effects.’

The baby doll role playing game – listed on eBay for sale before the pre-Christmas crackdown – also poses a choking risk to children, according to the report.

A pink hoverboard under the brand name ‘Mega Motion’ was also listed as posing a ‘serious’ risk to users.

The hover board’s reflective pink casing hides a ‘poorly built transformer’ that threatens to electrocute its owner when plugged in for charging.

A bear-shaped xylophone with a puzzle-block shape sorter on the side was found to pose a ‘serious risk’ of strangulation.

A pink hoverboard, sold under the brand name ‘Mega Motion’, was withdrawn for having a ‘poorly built transformer’ that could electrocute when plugged in for charging

The deceptively cute-looking bear was sold on Amazon UK between August 2020 and October 2021 – despite having a pull-along cord measuring 420mm, twice the permitted length.

‘As the cord is too long, a child may wrap it around their neck and get entangled, presenting a risk of strangulation,’ notes the report.

Colourful baby wrist socks – wearable, rattling garments for tots – made in China were destroyed at the border, after they were exposed as posing a risk of choking. 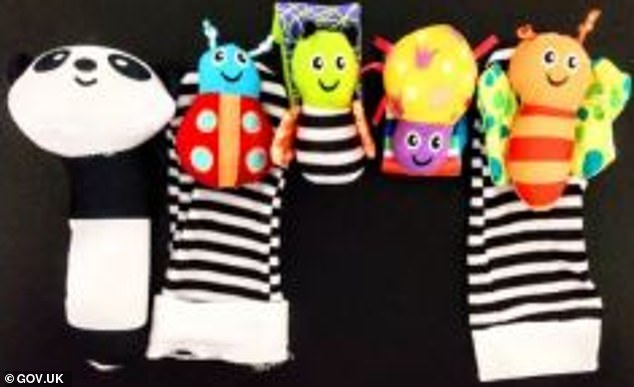 Tests by the Office for Product Safety & Standards revealed the rattle behind the yellow bug-like characters could easily be removed and put in the baby’s mouth during play.

Meanwhile, a baby walker shaped like a car with a rabbit on the front also failed safety checks.

Product testers found, when dropped, the rabbit on the front would break into five small pieces of plastic as well as releasing a screw. 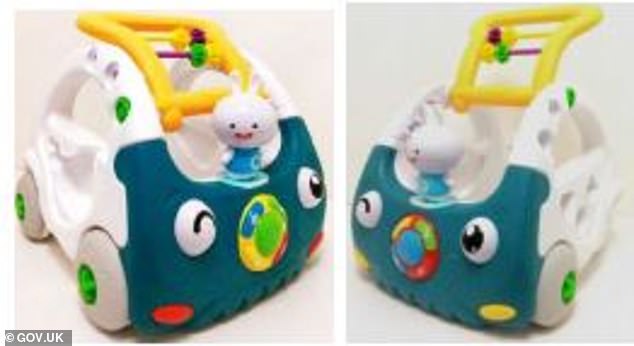 A baby walker shaped like a car with a rabbit on the front shattered easily, producing debris that could be swallowed

A probe into slime and putty toys across the UK in 2019 returned concerning results.

Non-compliant products uncovered by the probe have since been withdrawn and replaced with safe slime, according to the regulator.

According to the product safety report, a child under 36 months could easily choke on the debris produced by the fragile bunny’s demise.

More than 12,500 unsafe products, including toys, have been removed from supply during 2021 after failing product-safety tests.

The Office for Product Safety and Standards (an agency of the Department for Business, Energy & Industrial Strategy) reviews products from third-party sellers on online marketplaces, ensuring those that fail are removed from sale.

Customers who bought the hazardous products can return them and receive a refund.

Consumer Minister Paul Scully said: ‘No parent should have to worry about the safety of the toys they’ve bought their kids at Christmas.

‘Sadly, there are greater threats than finding a lump of coal under the tree on Christmas morning which is why we’re pulling out all the stops to keep everyone safe.

‘The UK has some of the highest product safety standards in the world and we’re hard at work to ensure nothing from the naughty list makes its way into Santa’s sleigh this Christmas.’