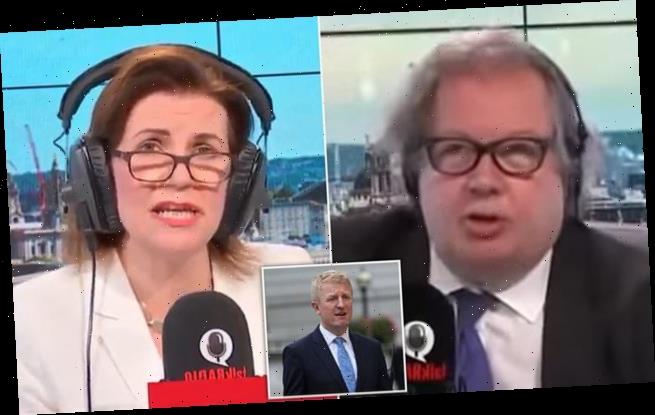 YouTube, which is owned by Google, terminated the radio station’s account amid claims the broadcaster ‘violated’ the website’s ‘community guidelines’ by airing criticism of coronavirus lockdowns.

MailOnline now understands that the Department for Digital, Culture, Media and Sport ‘made inquiries’ yesterday about what appeared to be an extraordinary clampdown on dissent by Google.

A source close to Culture Secretary Oliver Dowden said: ‘Protecting freedom of speech was a key part of what he announced on the online harms work.’ Google declined to comment.

Guido Fawkes reported that TalkRadio’s YouTube channel was deleted by Google at around 1am on Tuesday, reportedly for violating its ‘community guidelines’.

A spokesperson for Rupert Murdoch’s News UK, which owns TalkRadio, told MailOnline last night that it is still demanding a full explanation for Google’s decision to axe the station’s YouTube channel.

Yesterday a YouTube spokesperson said: ‘TalkRadio’s YouTube channel was briefly suspended, but upon further review, has now been reinstated.

‘We quickly remove flagged content that violate our Community Guidelines, including COVID-19 content that explicitly contradict expert consensus from local health authorities or the World Health Organization (WHO).

‘We make exceptions for material posted with an educational, documentary, scientific or artistic purpose, as was deemed in this case.’

The station has interviewed lockdown sceptics during the pandemic who doubt that massive restrictions on public life implemented by western governments can suppress the disease.

In October 2020, the WHO said in a statement that lockdowns were needed to ‘suppress the virus and avoid health systems being overwhelmed’, but the measures were ‘not sustainable solutions because of their significant economic, social and broader health impacts’. 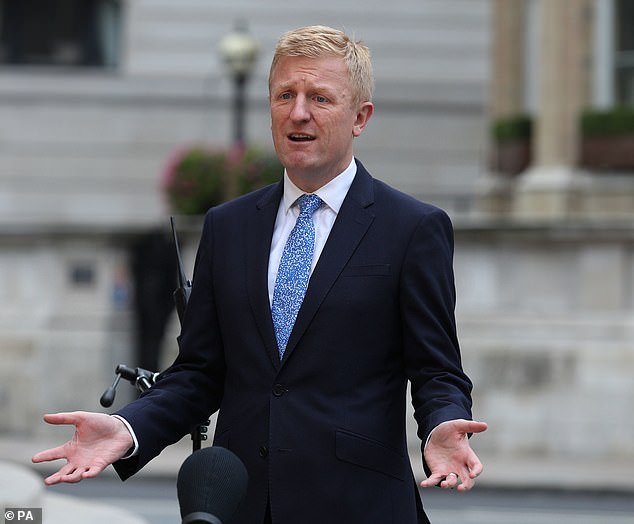 MailOnline now understands that the Department for Digital, Culture, Media and Sport ‘made inquiries’ about what appeared to be an extraordinary clampdown by Google 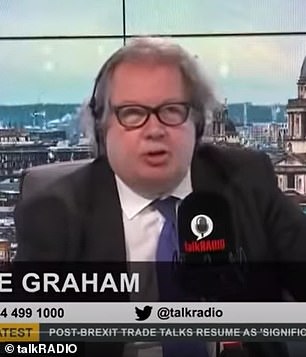 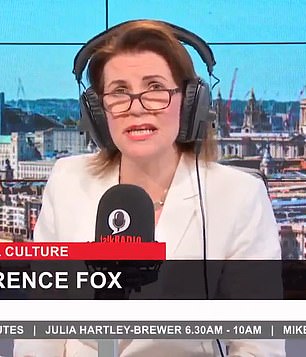 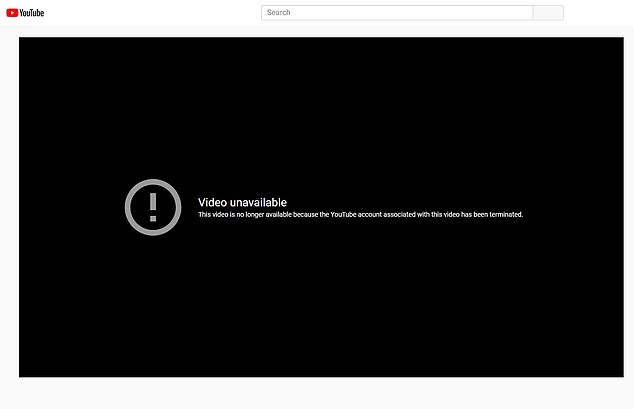 YouTube shut down TalkRadio’s channel after the broadcaster criticised lockdowns

Some of TalkRadio’s presenters, including Ms Hartley-Brewer, Mike Graham and Dan Wootton, have  criticised government measures to slow the spread of coronavirus as excessive or ill-targeted.

Mr Graham has invited Mail on Sunday columnist Peter Hitchens onto his Independent Republic show every Monday for nearly a year to discuss the Government’s handling of the crisis.

The radio station used YouTube to stream its live video content and archive old shows, and accrued tens of millions of views and 250,000 subscribers as its popularity soared last year.

YouTube’s policies are supposedly in place to ‘protect’ its ‘community’, which means stopping the spread of misinformation about coronavirus along with conspiracy theories, hate speech or ‘other harmful content’.

The company reviews each video that is flagged and will remove a video if it is deemed to violate these policies, issuing a strike.

A spokesman for TalkRadio said: ‘YouTube is making decisions about which opinions the public are allowed to hear, even when they are sourced to responsible and regulated news providers.

‘This sets a dangerous precedent and is censorship of free speech and legitimate national debate.’

A spokesperson had earlier told MailOnline: ‘We urgently await a detailed response from Google/YouTube about the nature of the breach that has led to our channel being removed from its platform.

‘TalkRadio is an Ofcom-licensed and regulated broadcaster and has robust editorial controls in place, taking care to balance debate.

‘We regularly interrogate government data and we have controls in place, use verifiable sources and give space to a careful selection of voices and opinions.’

TalkRadio later tweeted a poll which asked: ‘Will Britain’s freedoms ever fully return?’

TalkRadio: Its owner, hosts and controversies

TalkRadio is owned by News UK and is the sister station of national radio stations TalkSport and Times Radio.

It has about 424,000 listeners, according to the latest figures from market research provider Rajar.

TalkRadio has courted controversy since its relaunch in 2016.

Presenter James Whale was suspended over a July 2018 interview with an alleged sex assault victim that was said by the station to have ‘completely lacked sensitivity’.

He was given a week’s suspension and his show returned soon afterwards. He apologised to the alleged victim.

Galloway was sacked by the station in June 2019 for praising Liverpool FC for winning the 2019 UEFA Champions League Final instead of Tottenham Hotspur, a team with strong links to the Jewish community.

Last September, Mark Dolan cut up a face mask while claiming they did not have a significant impact on the spread of coronavirus.

Broadcasting watchdog Ofcom, which regulates TalkRadio, said: ‘This was a decision for YouTube.

‘Like other UK stations, TalkRadio’s radio channel comes under our Broadcasting Code. When we assess programmes under our rules, we take account of a broadcaster’s right to freedom of expression, and the right of listeners to receive information and ideas.’

Examples of content which is banned from YouTube include ‘denial that COVID-19 exists’, ‘claims that people have not died from COVID-19’, and ‘videos alleging that social distancing and self-isolation are not effective in reducing the spread of the virus’.

It warns YouTube users that it will remove content which violates the policy and give them a warning with no penalty if it is a first-time violation.

Google has a three-strike policy where channels that break its community guidelines three times within a 90-day period can be permanently banned.

The tech giant has previously banned conspiracy theorist David Icke and suspended One America News Network for breaches of its Covid rules.

However, a YouTube webpage states that the video streaming site is committed to freedom of speech and freedom of expression, claiming: ‘We believe people should be able to speak freely, share opinions, foster open dialogue, and that creative freedom leads to new voices, formats and possibilities.’

It also claims: ‘We believe everyone should have easy, open access to information and that video is a powerful force for education, building understanding, and documenting world events, big and small.’

Ofcom has also pledged to crack down on coronavirus misinformation that could cause serious harm, though no TalkRadio content about the disease has been subject to investigation by the watchdog.

‘I don’t believe in censorship, and we have a free and fair press, and we have commentators and interviewers of distinction who do criticise the Government’s position’, the Cabinet Office minister said.

‘I respectfully disagree with them but I think it’s important that their voices are heard and that debate takes place.’

Ms Hartley-Brewer later tweeted that no one at the station ‘has ever endangered any lives or worked against the NHS’, adding: ‘Free speech, debate and questioning policies that destroy lives, livelihoods and freedoms are a good thing.’

Actor Laurence Fox, who has also criticised shutdowns, warned: ‘This is just the beginning’ – in a suggestion that more online anti-lockdown rhetoric could be removed.

Toby Young, director-general of the Free Speech Union, called Google’s move ‘an assault on the freedom of the press’.

Civil liberties group Big Brother Watch said the removal of the channel was ‘a bold censorship move that would make China proud’.

Director Silkie Carlo told MailOnline: ‘YouTube’s termination of TalkRadio is evidence, if needed, that Big Tech censorship is out of control.

‘This chilling attack on a broadcaster is the type of thing you see in China. It is no coincidence that TalkRadio is one of the loudest critics of the Government’s mismanagement of the pandemic, nor that the Government is pressuring Big Tech companies to increase censorship under ‘online harms’ policies.

TalkRadio presenter Ms Hartley-Brewer denied that the broadcaster had flouted YouTube’s community guidelines. ‘We simply challenge the evidence that lockdowns are a proportionate response to the Covid virus. It’s called free speech,’ she tweeted

Lockdown sceptic Peter Hitchens said: ‘Are we any longer free if this sort of thing can happen?’ 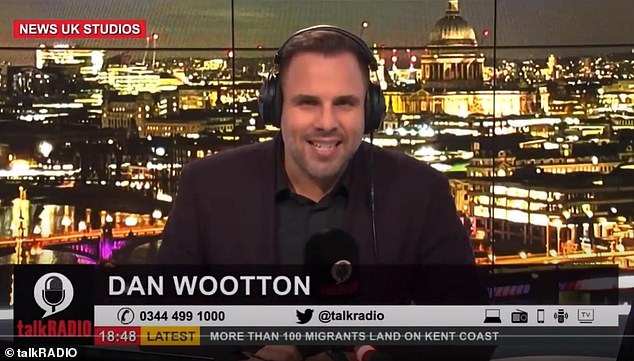 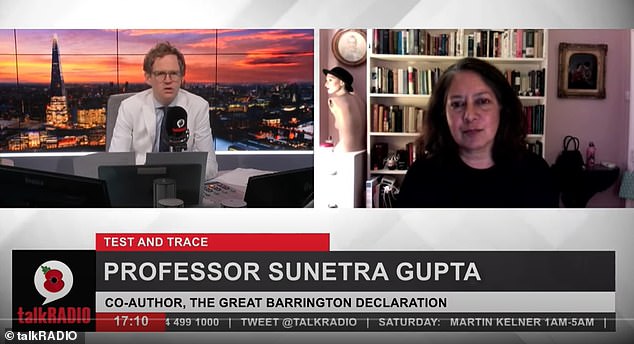 Dissenting experts who have spoken on TalkRadio include Oxford epidemiologist Professor Sunetra Gupta, who authored the anti-lockdown Great Barrington Declaration

Actor Laurence Fox yesterday tweeted: ‘This is just the beginning’ 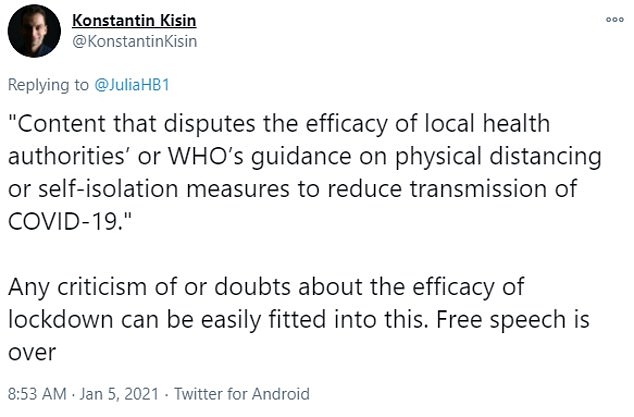 Triggernometry YouTube channel host Konstantin Kisin said: ‘Today is the day we can all be 100% certain that free speech is over’

‘This assault on free expression must be resisted and overturned.’

Triggernometry YouTube channel host Konstantin Kisin said: ‘Today is the day we can all be 100% certain that free speech is over’.

It comes as police vowed to fine anyone not wearing a mask, groups of more than two or anyone out of the house without ‘good reason’ at least £200 on the spot with one force ready to smash their way into homes to break-up parties.

The hard-line from England’s biggest forces came as new lockdown laws were published and it was revealed they will be enforced until Easter on March 31 – not mid-February as Boris Johnson promised.

Fixed penalty notices of £200 will be issued for any first offence, with this doubling for further offences up to a maximum of £6,400. Those holding, or involved in holding, an illegal gathering of more than 30 people risk a police-issued fine of £10,000.

Mr Johnson’s new legislation means that the public must stay at home unless they have a ‘reasonable excuse’, must travel for critical work, daily exercise and cannot meet with more than one person outside their household as the a arduous new third lockdown begins.

Scotland Yard has told its officers and PCSOs to take a ‘more inquisitive’ approach to policing the streets and have ‘issued refreshed instructions… to issue fines more quickly to anyone committing obvious, wilful and serious breaches’.

The Met says that anyone attending unlicensed music events or large illegal parties will now also be fined and anyone ‘wearing masks where they should be and without good reason can expect to be fined – not reasoned with’, the force said hours after officers said it was ‘impossible’ to fine everyone caught leaving their homes because the public lie to them.

Meanwhile West Midlands Police and Crime Commissioner David Jamieson has urged the government to give officers power of entry to homes, to help ‘enforce the new regulations more easily’ if there is an illegal party.

The regulations underpinning the drastic lockdown curbs have come into effect in England after Mr Johnson said he was left with ‘no choice’ due to the mutant strain running rampant. 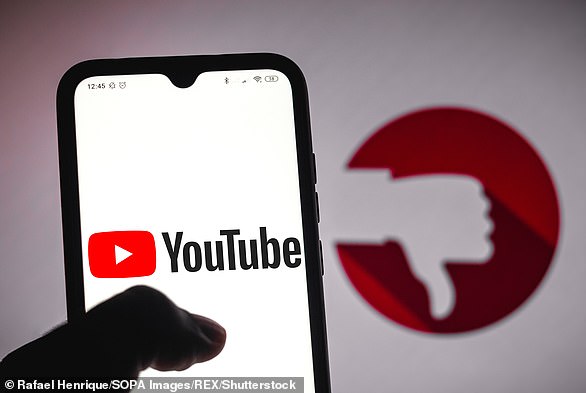 YouTube counts this as content which ‘discourages someone from seeking medical treatment by encouraging the use of cures or remedies to treat COVID-19’.

According to YouTube, users cannot upload content which ‘promotes prevention methods that contradict local health authorities or WHO’.

Google, which owns YouTube, states that content which ‘promotes transmission information that contradicts local health authorities or WHO’ also cannot be uploaded.

It lists as examples:

YouTube would ban videos which contain the following information: