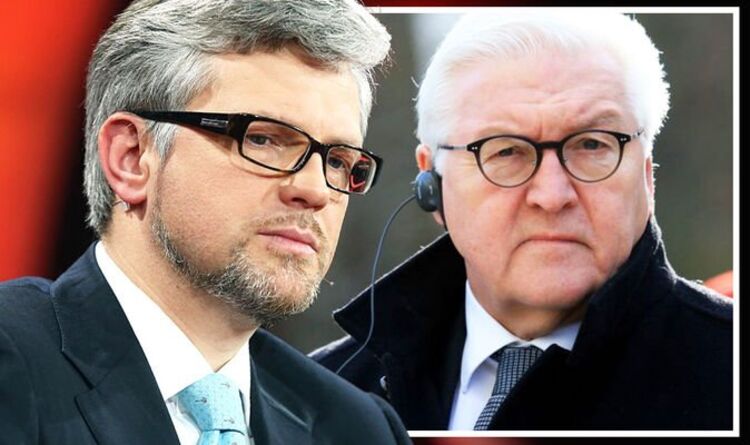 The allegations come from Ukrainian Ambassador Anrij Melnyk who has accused German President Frank-Walter Steinmeier of not being serious about breaking away from the previous policy on Moscow. The diplomat believes Germany has too many vested interests in Russia, through various mediums such as gas, oil and coal.

Mr Melnyk said: “For Steinmeier, the relationship with Russia was and remains something fundamental, even sacred, no matter what happens, even the war of aggression does not have a big impact.”

Speaking of ties with Moscow, he added: “Steinmeier has been weaving a spider’s web of contacts with Russia for decades.

“Many people who are now in charge as part of the traffic light coalition are involved in this.”

Defending his own country in light of the invasion by Russian forces, Mr Melnyk said: “From Putin’s point of view, there is no Ukrainian people, no language, no culture, and therefore no state.

“Steinmeier seems to share the idea that Ukrainians are not actually a subject.
“The thing with the concert was not a mistake,” Melnyk said, referring to a Ukraine solidarity concert by the German president he boycotted and at which Russian musicians were also to perform.

“From my point of view, the concert was a clear signal towards Moscow, maybe even to show Putin: I’m holding the line here.”

The ambassador claimed the President knew what made Ukrainians “tick” when he said: “Sensitivity is a foreign word for Steinmeier, at least with regard to Ukraine.”

In light of the current German Government, the senior diplomat called for more cooperation between Berlin and Kyiv.

He said: “This week we were astonished to learn from the media that after a very long period of secrecy, the traffic light coalition is allegedly presenting a list of weapons that could be supplied.

“Communication could be much better.

But on the one hand, there were weapons from German manufacturers on the list the army does not need as a priority, and on the other hand, there was no concrete promise of the extent to which these purchases will be financed by the Government.

Mr Melnyk went on to argue: “So this figure of 308 million euros is just a fake.”

The diplomat said: “Berlin, of course, started from zero.

“That’s really something to appreciate, and we do.”

No plans have been coordinated with Ukraine so far.

Mr Melnyk added: “On 3 February, we submitted a list of defensive weapons we needed, and a month later, in the middle of the war, another one also with heavy weapons.

“Unfortunately, until today only this first list has been processed, after exactly two months.

“So much valuable time is being wasted.”

Has Germany let Ukraine down since the start of the conflict? Does Germany rely too much on Russian energy resources? Did Germany react too late in helping Ukraine? Let us know what you think of these pressing questions by CLICKING HERE and joining the debate in our comments section below – Every Voice Matters!

The ambassador called for more heavy equipment in particular.

He said: “We urgently need heavy weapons. The Germans could supply a lot.”
He said it was mainly stationary anti-aircraft missiles, artillery systems, rocket launchers, tanks and armoured cars.

He added: “Our soldiers walk on foot between Mykolaiv and Kherson, 60 kilometres.”

With diplomacy all but exhausted between Russia and Ukraine via numerous intermediaries who have tried and failed to secure peace, Mr Melnyk saw himself in a more sombre role since the war broke out.

Mr Melnyk ended: “I am the arms dealer of Ukraine here.

The only thing my president or my ministers care about: Is there anything new? Do you have weapons?

“These are the talks we have been having for weeks.

“And because things are so bad with the Ministry of Defence, we ourselves are in close exchange with the German arms industry.

“We ask companies directly what is available.”