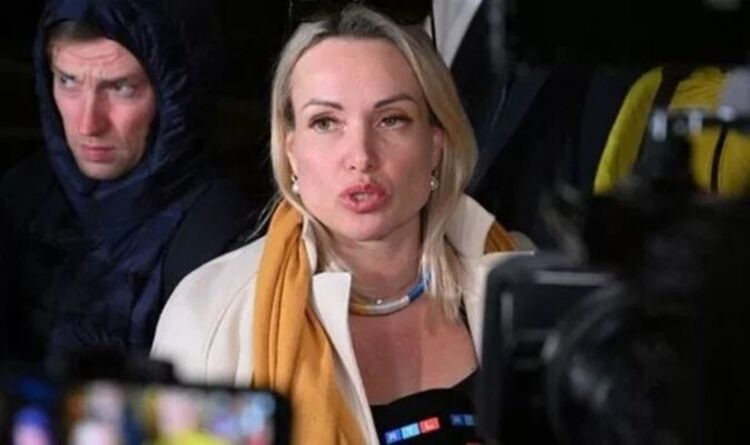 Ms Ovsyannikova will join a company which is owned by Die Welt newspaper just weeks after she stormed onto the set of a Kremlin-run media outlet in Russia carrying an anti-war placard. The 43-year-old was fined 30,000 rubles (£214) after being interrogated for 14 hours in relation to an anti-war video message she posted online.

The role will see her write for the German daily broadsheet and appear as a contributor on a TV news channel which it owns.

He added: “I am excited to be working with her.”

JUST IN: Macron claims he will visit Kyiv if it is ‘useful’ following first round election victory

Ms Ovsyannikova also claimed Die Welt “stands for what is being defended so vehemently by the courageous people on the ground in Ukraine right now: for freedom.”

During her on-screen protest, Ms Ovsyannikova carried a placard while the Channel One TV host continued to read from the autocue.

The placard said: “No war. Stop the war.

“Don’t believe propaganda. They are lying to you here.”

However, in a video which resulted in her receiving a fine, Ms Ovsyannikova urged her compatriots to protest against the war.

She told them only they have the power to “stop all this madness”.

Ovsyannikova had been offered asylum in France following the incident but turned it down as she wanted to stay in Russia despite expressing safety concerns, the BBC has revealed.

She could still face further prosecution from the Kremlin if they find her guilty of spreading “fake news” about the invasion.

Russian state-controlled media outlets have instead been told to describe it as a “special military operation”, just as Vladimir Putin did on the eve of the invasion.