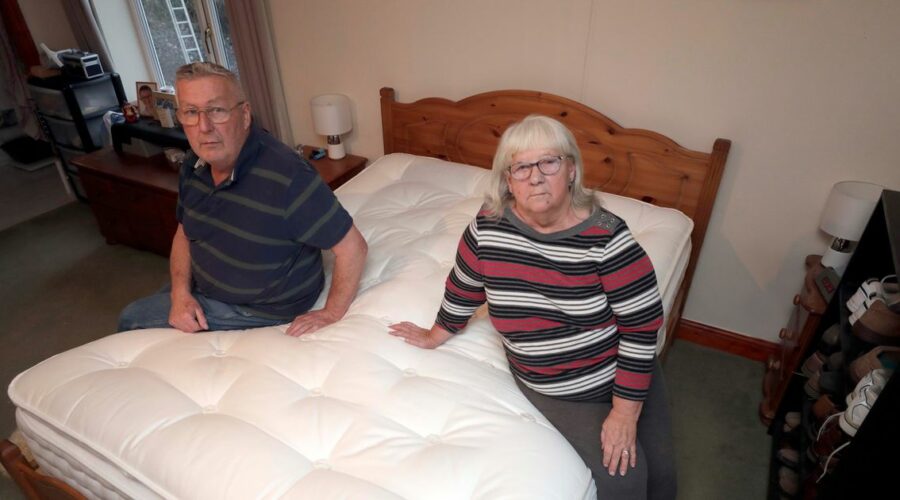 An elderly couple have been left fuming after they said a "knackered" mattress sent from Bensons for Beds has caused them sleepless nights since July.

Stephen and Evelyn Buckley, 74, from Huddersfield, West Yorkshire, paid £1,100 for the mattress, and claim their nights are being ruined because it is so uncomfortable.

The couple say they have attempted to get rid of the king-sized mattress but are having no luck doing so, YorkshireLive reports.

Stephen said he has been left unable to sleep or eat as a result of the mattress.

"We're pensioners, it's disgraceful," he said.

"My blood pressure has gone sky high and my stomach's churning and in knots – the impact on my sleep is driving me crackers.

"This morning I woke up at four o'clock in the morning because I couldn't sleep and I haven't been able to eat since."

Stephen said that within five to six weeks of the mattress being delivered, it was sagging and had "gone like a hammock", with a three-inch gap in the middle of it.

Bensons for Beds then sent an independent inspector out from HomeServe to have a look at the mattress, and declared it of an acceptable standard.

But Stephen and Evelyn said the inspection ignored the sagging problems – and they are still struggling.

They had paid for the mattress on Tesco credit card, so Stephen got in touch with Tesco and managed to get his money back.

However, he says Bensons for Beds are requesting payment for the mattress since the assessor declared it acceptable – and he's not had any luck explaining his case to Bensons for Beds.

Stephen has since been trying to find an independent assessor to look at the mattress on Bensons recommendation he get a second opinion – and has paid £150 to book someone from Chesterfield to come out.

Bensons for Beds said it would be unable to comment on the specific case due to data protection restrictions – though invited Stephen and Evelyn to get in touch directly.

A spokesperson explained: "We understand that getting the right mattress which provides a great night’s sleep isn’t always easy, therefore here at Bensons for Beds we offer a 40 night comfort guarantee.

"This allows the customer to trial the bed for 40 to 56 nights. If the bed is not suitable they are able to exchange it for another from our store/online. This does incur a fee. More information can be found here.

"Alternative to this, if the customer is feeling there is a fault with the bed we are able to help. Issues such as this are rare, however we are here to help the customer make a claim against your guarantee with the manufacturer which covers them against any manufacturing faults or defects in these instances.

"As stated above, we would be happy to help the customer with their case and would love to receive the details for the order therefore we can speak with the customer directly to resolve this."