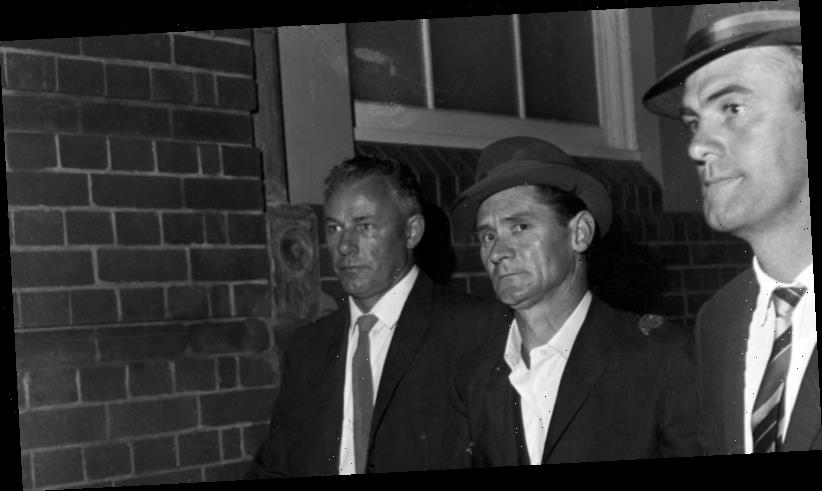 Ronald Ryan and Peter Walker were back in Pentridge Goal last night, 19 days after their escape. 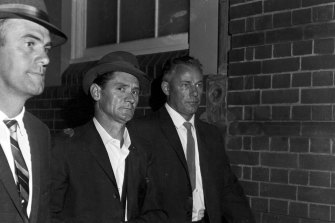 Melbourne prison escapee Ronald Ryan being taken to police headquarters in Sydney after his recapture on January 5, 1966.Credit:Warren Croser

Earlier they appeared in the City Court and were charged with murder and with having escaped from goal.

This followed a day of drama and official secrecy which began with their extradition by a two-hour flight to Laverton RAAF base, and ended when the door of H division, the maximum security division, at Pentridge clanged shut behind them.

At the City Court, specially convened before Mr Thompson, SM, at 7.24 pm, Ryan and Walker were remanded in custody to a date to be fixed.

Ryan faced two charges – “that being a male person lawfully imprisoned for a crime by a court of competent jurisdiction he did escape from custody” – and – “on December 19 at Coburg he did murder George Henry Hodson.”

“That being a male person lawfully imprisoned for a crime by a court of competent jurisdiction he did escape from custody. 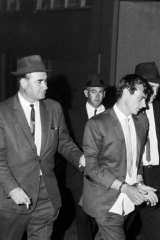 Peter Walker is led in to police headquarters in Sydney after his recapture in January 1966.Credit:W. Croser

“That on December 19 at Coburg he did murder George Henry Hodson.

“That on or about December 24 at Middle Park he did murder Arthur James Henderson.”

Immediately after Ryan and Walker left the dock they were placed in a police wagon and 15 minutes later handed over to Pentridge officials.

Ten uniformed police and eight armed CIB men stood around the courtroom during the brief hearing.

The public gallery was packed and 20 reporters crammed the press benches.

Ryan, grim-faced, and Walker, who smiled on entering the dock and when he was leaving, appeared together handcuffed to homicide squad detectives, First Constable Ronald Jackson and First Constable Reginald Baker.

Following extradition proceedings at Sydney’s Central Court earlier in the day, Ryan and Walker and a third man, Norman Harold Murray, 49, laborer, of Coogee, who was charged with having harbored them, were released into the custody of Victoria’s homicide squad chief, Detective Inspector F. Holland.

Hundreds of sightseers gathered in narrow Central Street, outside Sydney’s central police station to try and catch a glimpse of Ryan and Walker as they were driven to the airport.

The destination of the chartered aircraft was kept a close secret.

As soon as the aircraft taxied to a stop at Laverton RAAF base Ryan and Walker were hustled into two waiting police cars.

Air force service police had sealed off the base soon after 4 pm, and the only outsiders permitted through the gates were 14 detectives and several uniformed police.

Newsmen were kept in doubt as the aircraft’s ultimate destination until 5.25 pm, when it finally hove into view over Laverton after circling Essendon minutes before.

Minutes later a police convoy of six cars sped through the gate headed for the city.

Ryan – sandwiched between two detectives – stared straight ahead as the car carrying him sped through the gates.

Walker, two cars behind, buried his head in a hat.

A dramatic high-speed dash to the city followed.