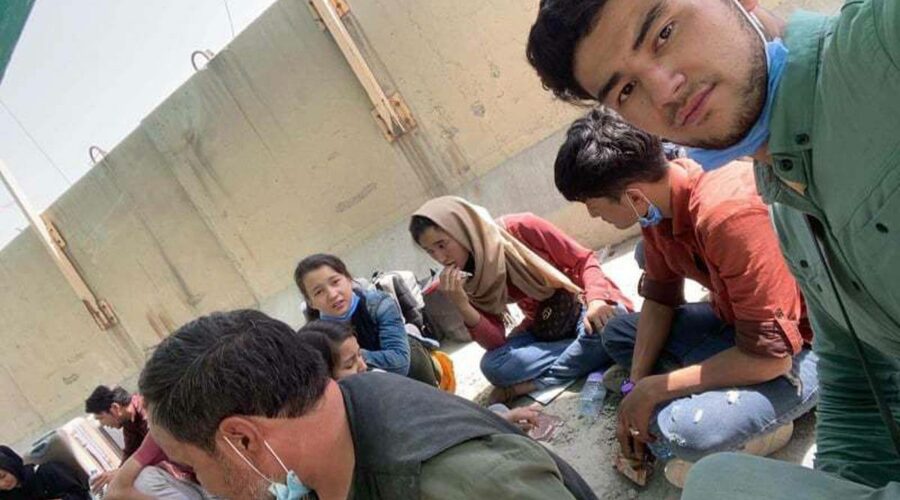 His family escaped “Taliban hell” and have arrived in New Zealand. Now Mohammed Alim Zaheri is counting down the minutes to when lockdown ends so he can finally be with their properly.

The 44-year-old, who himself came to New Zealand as a refugee, believed “God’s grace” helped him get New Zealand residency, which allowed him to sponsor his wife and seven children to come.

Zaheri said it has been two years since he has seen or held his family, and that he has spent sleepless nights worrying about the safety of his family since the Kabul fell to the Taliban a month ago.

“Life has been hell for everyone there since the Taliban seized power last month,” he said.

“I talk to my wife every day and one day she told me that she witnessed our neighbour getting shot and killed, I was thinking my family could be next.”

Zaheri said an immigration lawyer, whom he did not want to name, helped to apply for immigration papers under urgency to get his family visas to come here.

His wife and seven children aged between 8 and 21 got approved and managed to get onthe evacuation flight by New Zealand and Australian defence forces.

On the flight also was Zaheri’s 22-year-old nephew.

Their gruelling three-day journey took them from Kabul Airport to Dubai, then to Australia before finally landing in Auckland on August 24.

After the chaotic evacuation, a bomb attack at Kabul airport brought New Zealand flights to an abrupt end. The bombing killed 182 people, including 169 Afghan civilians.

“When I saw my family dropped off at the MIQ Nesuto Hotel, I just fell on my knees and cried,” Zaheri said.

“I wanted to give anything just so I can hold them. It is by God’s grace that they are safely here. I am now counting every minute to the end of lockdown so we can be together again.”

The family cannot be fully together until Auckland comes out of lockdown.

Zaheri came to New Zealand as a refugee in 2003 after being rescued from the Norwegian freighter Tampa, in 2001, and spending 18 months inAustralia’s Nauru Detention Centre.

But he returned to Afghanistan after just seven months in Auckland because of a family emergency.

“My father was dying and as the eldest son, my mom pleaded for me to go home. I had no choice,” Zaheri said.

His father died and Zaheri wanted to return to New Zealand, but had lost all his documentation.

“My family put their hope in me, they say to me then you go save yourself and hopefully one day you can save us,” he said.

“Every day since I came to New Zealand I’ve been asking how I can bring my wife and family here.”

Life is hard in Afghanistan, Zaheri said, and it’s gotten “100 times worse” under the Taliban.

“Children go hungry every day, people don’t have cooking oil or flour, they are selling all their household goods for money,” Zaheri said.

“Every time they step out of the house and see a Taliban, people shiver with fear.”

Zaheri said his wife Saleha, 43, was mostly holed up at home because under Taliban rule, women can’t go out without a male escort.

Women in Afghanistan are being told to stay at home for their own safety.

He said the Taliban’s interpretation of Islamic law was “like 1400 years ago”.

When Zaheri was told by the immigration lawyer the family got approved to come to New Zealand, he called them immediately.

“I got someone to help them get to the airport and I told my familyto guard their New Zealand papers with their lives because that is their ticket to freedom,” he said.

“My wife told me it was total chaos at the airport, everyone was pushing and shouting. People are so desperate to get out.”

This week, dozens of organisations and individuals have put their name to an open letter calling on the New Zealand Government to give refuge to all Afghan nationals who helped defence forces, and to take at least 1500 Afghan refugees.

It called on the Government to evacuate the remaining people in Afghanistan left from the initial mission to include at-risk individuals connected to New Zealand in these efforts.

Zaheri’s family are among 387 people with eligibility to enter New Zealand who made it into the country.

A police spokeswoman said its ethnic responsiveness team was assisting with the Afghan Resettlement Project to settle the new arrivals.

Its ethnic liaison officer Mariam Arif and police constable Abtin Karimi have been meeting Afghan evacuee bubbles and holding orientation sessions, which included anintroduction to policing in New Zealand, lockdown expectations, and how to report hateincidents and family harm.

Foreign Affairs Minister Nanaia Mahuta said last month Cabinet was exploring a second phase evacuation from Afghanistan, but she was not in a position to widen the criteria for allowing people into New Zealand beyond what had earlier been decided by Cabinet.

19/09/2021 World News Comments Off on From Taliban hell to paradise: Afghani refugee reunited with family from Kabul
Markets