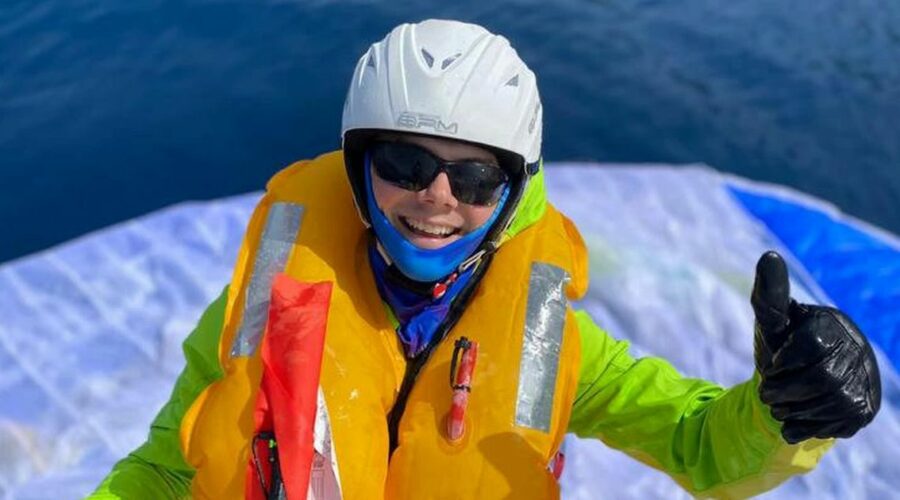 A British bloke faced a terrifying situation when he realised his parachute was tangled during a 1km fall to the ground while paragliding.

Aaron Hall, 23, lost control after his parachute became tangled, forcing him to land directly into the water 1,000 metres below.

The 23-year-old, from the Isle of Wight, had been enjoying some time in the skies aboard a paraglider in south-eastern Turkey and was taking part in a four-day course called the 'Simulation d'incident en vol'.

Designed by top paragliders, the course is for potential paraglider pilots to 'build up confidence and control' in 'progressively more unstable conditions'.

Aaron's initially quiet flight was interrupted after a "full-frontal collapse" during a manoeuvre, with the Brit pulling the cords of the parachute, which ended up folding over and getting tangled during an unplanned descent.

The 23-year-old fought against the botched unfurling with some success as he managed to open the chute back up, but one side was tucked underneath a strap.

He was unable to untuck the strap, causing a spiralling descent that managed to pull the chute and fully unfurled the tarp, but was unable to regain the altitude he had lost.

Aaron cited a "lapse in my concentration" as the reason for the botched manoeuvre, which sent him spiralling toward the ground and caused a crash landing in the ocean.

The 23-year-old said: "The cascade of events that followed was a series of twists and cravats that were difficult to control and stubborn to expel.

"Eventually, after using a combination of strong pumps on both brake lines and a little bit of untangling the lines by hand both the cravats were clear."

But the dangerous moment that could've cost Aaron his life didn't phase him until he had made it back to solid ground, with Aaron saying: "Once I'd made it back to the beach I was finally able to process how it made me feel.

"This incident hasn't put me off the sport at all, I think if anything, it has ignited a fire within me to take every opportunity to better myself to really understand the wing, how to control it, and even master it."