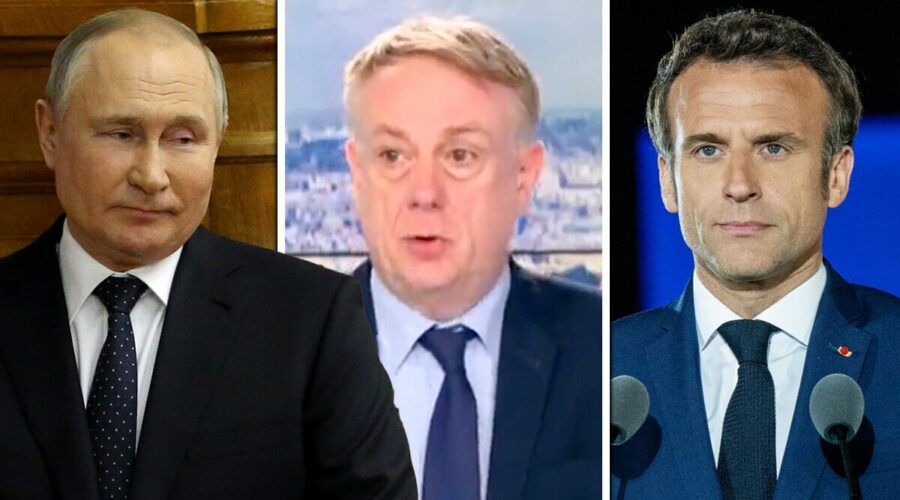 Tensions have been rising in France since Emmanuel Macron’s Government announced weapon deliveries to Ukraine – a first for the country since Russia’s invasion of Ukraine started – over the risk of war escalation with Russia. Until late April, France had refused to support Ukraine out of fear of moving closer to war. France has since provided €100 million worth of weaponry and artillery to Ukraine to defend itself against Russian forces. Defence consultant Jérôme Pellistrandi argued the move could “tip” France on the precipice of war with Russia.

Speaking to French broadcaster BFM TV, Mr Pellistrandi said: “If Putin considers that helping Ukraine with military means is co-belligerence, he could indeed say so.”

But the legal meaning of co-belligerence – an informal military alliance with a foreign country to wage war against a common enemy – is non-existent in international law, making it more manipulable.

Mr Pellistrandi said added: “Co-belligerence is not a legal concept in international law.

“A state is free to help, to provide support in any form whatsoever to another state, all the more so because the latter has been attacked.

“This is the case with Ukraine. Ukraine is a sovereign state which has been attacked by Russia.

“And so it is legitimate to be able to help it in various ways, including through military aid.”

History has shown that a foreign country can help another one in its war effort by various means without becoming a co-belligerent.

Mr Pellistrandi continued: “The Yom Kippur War in 1973, where there was a massive airlift between the Soviet Union, Syria and Egypt, and on the other side, the United States doing the same thing to Israel. And the US and the Soviet Union did not go to war.

“Of course, there is the Vietnam War, where the Soviet Union supplied a lot of supplies to North Vietnam at the time, which was opposed to the South Vietnamese and the United States.

“And then, last example: it’s during the war in Afghanistan when the Soviet Union invaded Afghanistan in 1979.

“At that time, the United States armed what was called the mujahideen.

“And finally, a cinematographic example: the blockbuster Rambo III where there is no co-belligerence but where the Americans are present and help the mujahideen.”

Putin will eventually decide whether France is participating in the war, says Mr Pellistrandi.

He added: “This could be one of the elements of the conversation in a few minutes’ time with Vladimir Putin and Emmanuel Macron.”

Vladimir Putin and Emmanuel are holding phone talks at midday on Tuesday.

The two leaders have not met since late March because of the French presidential elections. Putin congratulated President Macron on his re-election.