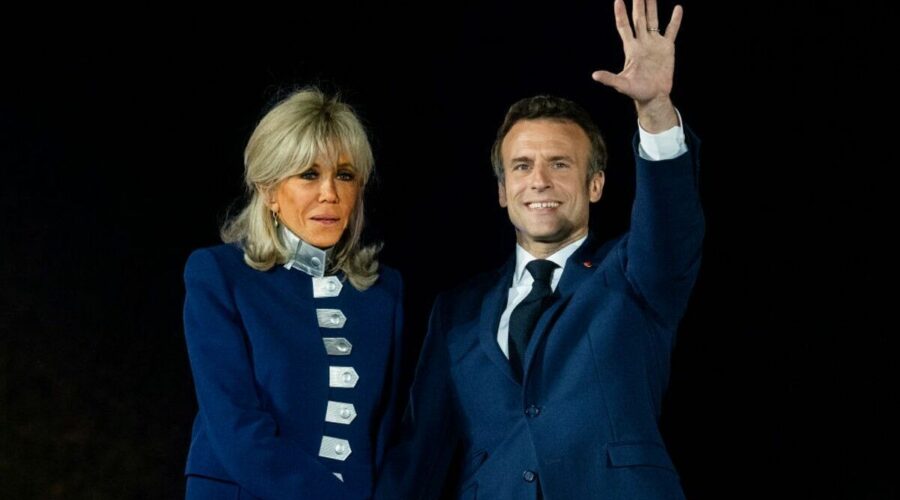 The President secured his second term in office by beating far-right rival Marine Le Pen in a race seeing the leader of National Rally come ever closer to Mr Macron. However, many claim Mr Macron’s win was solely a vote against Ms Le Pen rather than a vote for the incumbent as many ballots were left blank or spoiled in the second round run-off. In spite of losing her third attempt at the presidency, Ms Le Pen has vowed to fight on for France calling the significantly improved voting percentage a victory in itself.

Yet Mr Macron’s congratulatory message by the Le Pen team was short-lived.

Taking to Twitter as Mr Macron arrived at his celebratory parade to the sound of Beethoven’s Ode to Joy instead of the French national anthem, Ms Le Pen’s spokeswoman criticised the President.

“Why not the national Marseillaise?

“For us, France is not a hotel room in a globalised world, it is what protects those who have nothing.”

She continued: “42 percent: this is an unprecedented score in our political family and Marine Le Pen is the first opponent of Emmanuel Macron.

“We must send a maximum of MPs to the National Assembly!”

Speaking to the French outlet RTL, Ms Lavette ended: “It is not a defeat, I want to tell the 42 percent of people who voted for us hope is rising.

“We will go into battle for the legislative elections.”

Ms Lavette was joined by pro-Macron supporter and former Minister of Interior Christophe Castaner, sparking a heated debate between the pair over their respective leaders.

The National Rally spokeswoman said to Mr Castaner: “Do you really find the campaign we have lived for 15 days worthy of a great democracy?”

To which he replied: “Your candidate has spent six months insulting Emmanuel Macron.”

Ms Lavette reacted furiously: “Are you kidding? She has been meeting the French people for six months.”

She ended: “Mr Castaner, I don’t mind you won, I absolutely do not question the victory, but you can’t say at the end of this quinquennium (Fifth Republic) that France is not fractured as never before, there is one in four French people who do not eat at the end of the day.

“Do you know why France is fractured?

“Because people like you can say anything, as you have just done.”

Mr Macron long campaigned a vote for him would be a vote for Europe, hence by choosing Ode to Joy, the symbolism of the victory was reflected.

However, many took to social media to question France’s loyalty to the supranational institutions of the European Union.

John Whittaker said: “With Macron walking to victory to the European national anthem instead of the French one?

“Maybe the question should be ‘why are the French so European’”

M127B said: “It’s crazy when you see Macron makes his apparition in Paris with the European Union anthem.

Has Emmanuel Macron shown his true colour by choosing the European Anthem over the French Marseillaise? Is this the end of Marine Le Pen’s hopes of becoming the first female President of France? Does Emmanuel Macron have bigger plans for his political career inside the EU? Let us know what you think by CLICKING HERE and joining the discussion in our comments section below – Every Voice Matters!

Yendi questioned Mr Macron’s future ambitions by choosing the tune.
She said: “Macron wins with the European hymn, not the national anthem La Marseillaise, is it an omen?

“His next political ambition?”

Yet for some, Mr Macron arriving to Beethoven’s classic was a good thing.

Remi Mogenet said: “Macron did a thousand times well to march solemnly to the sound of the European anthem, Beethoven’s music and Schiller’s words are objectively superior to the Marseillaise and French children would all elevate their souls and their sense of the future if they were learning it.”