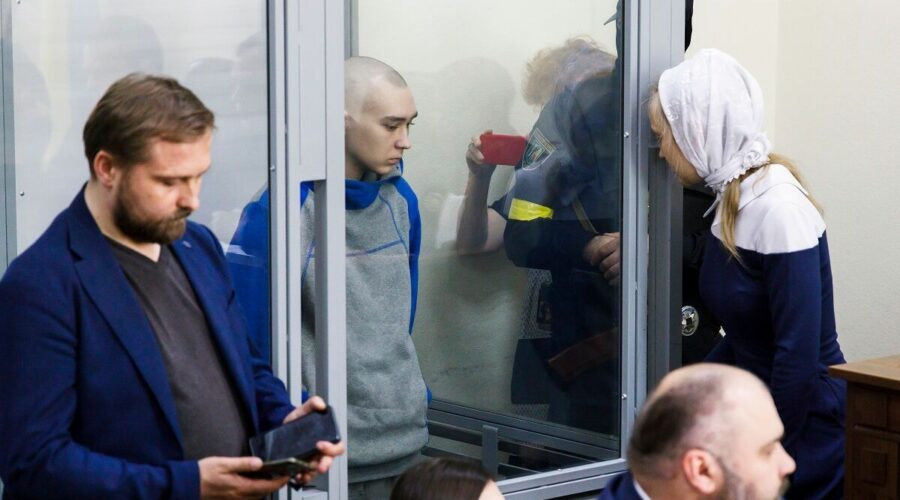 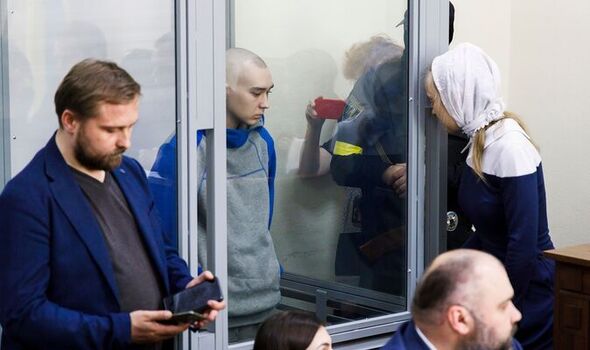 Vadim Shysimarin, a 21-year-old commander of a tank division, arrived at Kyiv’s small district court No 3 in a grey and blue tracksuit and wearing handcuffs for a preliminary hearing. Shysimarin, captured by Ukrainian forces, admitted shooting the civilian – who was on the phone while riding a bicycle – in a video posted by the Security Service of Ukraine.

“I was ordered to shoot,” he said of the killing on February 28.

Ukrainian prosecutors believe Shysimarin was ordered to kill the unarmed man, “so the victim would not report them to Ukrainian defenders”.

The killing happened “dozens of metres” from the victim’s house in the north-east village of Chupakhivka. The shot was fired from an AK-74 assault rifle.

Shysimarin will appear before the court again on Wednesday.

Ukraine said it has identified thousands of potential war crimes committed by Russia.

Many of the alleged atrocities came to light last month after Moscow’s forces ended their bid to capture Kyiv and withdrew from around the capital, exposing mass graves and streets and gardens strewn with bodies in towns such as nearby Bucha.

The Ukrainian security service said Shysimarin’s statement is “one of the first confessions of the enemy invaders”.

State prosecutor Andriy Synyuk said after the hearing: “This is the first case today. But soon there will be a lot of these cases.”

The number of crimes registered by Ukraine’s general prosecutor has surpassed 11,200 and Unicef reported that at least 100 children were killed in April alone.

Russia’s campaign to take the country’s east has been slow and suffered several setbacks.

The Ministry of Defenhce said in an intelligence update: “Conducting river crossings in a contested environment is a highly risky manoeuvre and speaks to the pressure the Russian commanders are under to make progress in operations in eastern Ukraine.”

He said: “In order to win it now, we must carefully plan resources, avoid mistakes, project our strength so that the enemy, in the end, cannot stand up to us.

“Ukrainian army and the entire Ukrainian population repulsed the occupiers and thwarted their plans.

“In a month, Ukraine achieved integration in the field of defence, which could not be achieved for 30 years. We receive heavy weapons from our partners. In particular, American 155mm M777 howitzers are already deployed at the front. Three months ago, this was considered impossible.”

Russia yesterday revealed it will suspend electricity to Finland as tensions rise over Helsinki’s ambition to join Nato.

President Vladimir Putin has repeatedly warned Finland and Sweden – both neutral countries – not to join the military alliance. A statement from RAO Nordic, a subsidiary of Russian state energy holding Inter RAO, said: “We are forced to suspend the electricity import starting from May 14.”

Ukrainian President Volodymyr Zelensky yesterday hit at French leader Emmanuel Macron for trying to have a constructive dialogue with Putin.

He said: “We must not look for a way out for Russia and Macron is doing it in vain.”

The Ukrainian leader said Putin would not end the war “until Russia itself wants and understands that it needs” this.

While forces continue to hold out at the heavily-bombed Azovstal steelworks in Mariupol – the last pocket of defence in the besieged port city – Ukrainian officials say there is a growing humanitarian crisis in the Russian-occupied region of Kherson.

Hundreds of civilians are trying to escape the southern region as Russian troops raid villages.

Yurii Sobolievskyi, first deputy head of the Kherson region council, said: “Our hospitals run out of fuel and medicine and there is a problem with food supply.”

In his evening address to the nation, Mr Zelensky condemned the assaults.

He said: “What can be achieved by destroying Ukrainian schools? All Russian commanders who give such orders are simply sick and incurable.”