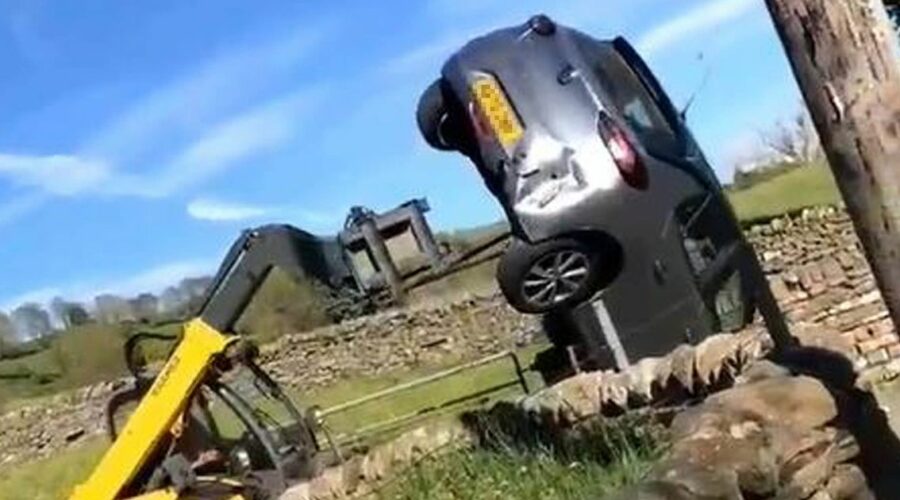 A farmer flipped a drunk youth’s car with a tractor after he refused to move it off his land.

Robert Hooper, 57, took matters into his own hands on June 5 2021 after he claimed that he hadn’t had “the best response” from the police on previous occasions.

The 57-year-old appeared in court after he clashed with driver Elliott Johnson and his friend Connor Burns, 21, in Newbiggin-in-Teesdale, County Durham.

He denies dangerous driving and criminal damage, claiming he acted in self-defence after he politely asked the pair to move their Vauxhall Corsa from his farm entrance.

The “frightened” man told jurors he felt threatened, adding that he had been repeatedly punched and that “an Englishman’s home is his castle”.

He added that there was an “influx” of youths in the area, causing anti-social behaviour – such as drug taking, littering and damaging walls.

Hooper claimed that Burns had drank around six bottles of beer and told him: “I’m not effing moving this car”.

The farmer added that Burns punched him twice, bursting his lip.

Mobile phone footage showed Hooper using a tele-handler to lift the car from the entrance of his farm and dumping it onto the road outside his property.

Hooper added: “I thought: ‘We have a bit of a problem here, there’s two of them, half my age,’ I didn’t know what they had in terms of weapons, or what they were capable of doing.

Michael Rawlinson, defending, asked him why he didn’t call the police.

Hooper said there had been eight break-ins over the years and that police officers might take up to an hour to arrive.

After pushing the vehicle onto the road, he claimed there was “an onslaught” from Burns, punching him and knocking off his glasses.

He said he “definitely” did not mean to strike Burns with the vehicle’s forks.

Once he removed the Corsa, Hooper locked himself in his home with his partner who had called the police.

David Ward, prosecuting, asked the farmer his weight and height and after Hooper replied around 100kg and 6ft 3ins, the barrister commented: “You’re quite a big bloke, you are quite imposing.”

Judge Ray Singh asked if Hooper thought that pushing the car over would calm the two men down.

The farmer replied: “Probably not. I was under threat.”

A jury cleared Hooper of all charges on Friday (January 4) following a four-day trial.

After the case, his partner Kate Henderson read a statement which said: "The overwhelming support of the local community and people from afar have kept him going during these last eight months of hell.

"We welcome the jury's verdict and are thankful for it."