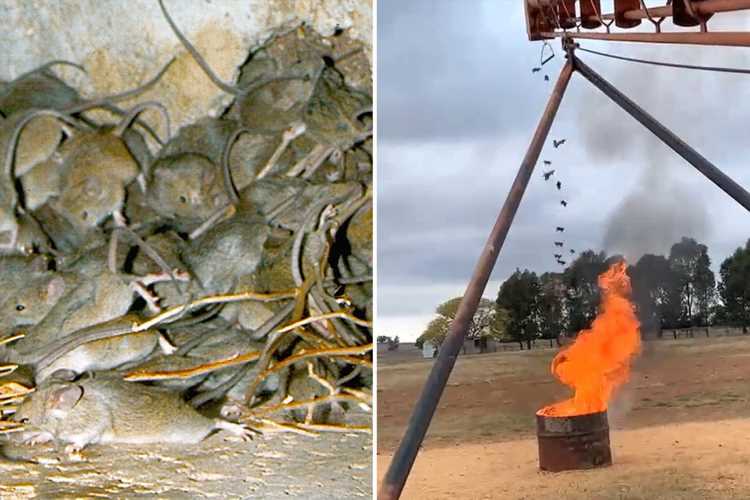 A DESPERATE farmer has constructed a makeshift mouse incinerator to save his crops as a rampaging rodent plague blights Australia.

Video shows thousands of mice being fired out a grain conveyor and into a blazing 44 gallon drum to burn the tiny creatures alive. 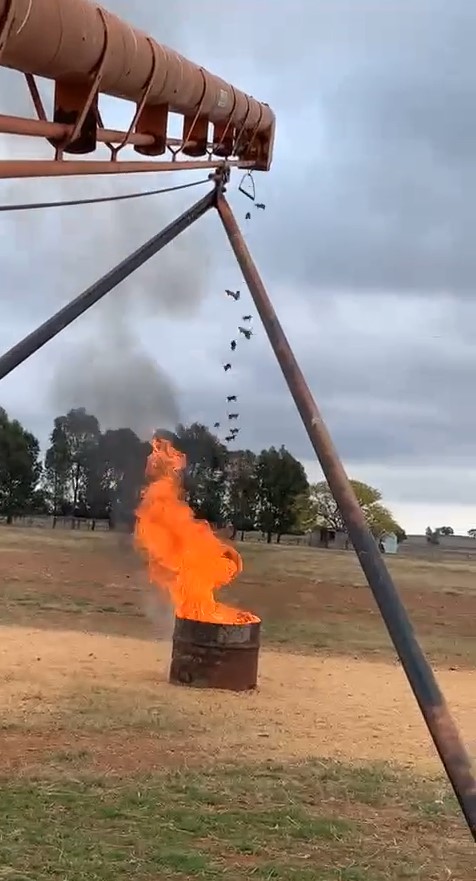 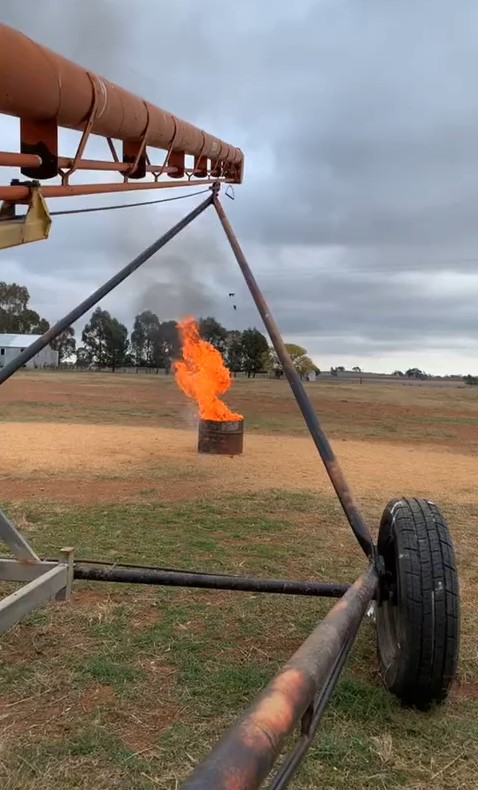 The farmer, named only Andrew, shared his makeshift contraption on TikTok with the clip going viral amid the devastation being wrought across New South Wales.

It has been viewed five million times as its feared the mouse plague could ruin the livelihoods of thousands of farmers and last two years.

Andrew claimed the mice were infesting the machinery used to pump grain into a silo.

However, his rather elaborate method to get rid of the mice has raised some eyebrows and drawn criticism.

Tens of millions of rampaging mice have sparked horrific outbreaks stretching 1,000km from Brisbane down to Melbourne and tormented farming communities for eight months.

In just three months, two mice can spark a colony of almost 400, rapidly spawning to tens of thousands.

Andrew was unrepentant over his actions despite the online criticism – showing how desperate farmers are becoming across Australia.

"I don't like mice but that's messed up," one person said, to which he replied "You're messed up".

He added: "Better than drowning them alive. 'But most of them are dead because the auger chops them up."

Another person added: "I'm not a vegan but seriously do you think maybe we shouldn't burn them alive?"

He replied: "Ok how would you like me to do it?"

Andrew also claimed he won an appeal against TikTok after the video was originally taken down to the complaints from users. 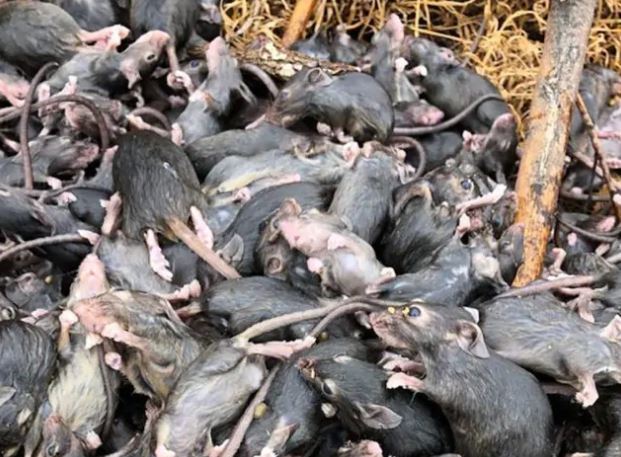 Xavier Martin, the vice president of NSW Farmers, said farmers are abandoning their paddocks to the mouse plague.

They fear crops sown there over the winter will simply be devoured before they can be harvested.

Mr Martin said: "Without a concerted baiting effort in the next few weeks, this could easily turn into a two-year plague event."

And in a desperate bid to stop the mouse menace, the government has secured 5,000 litres of the toxic rodent poison bromadiolone.

It is dubbed "napalm for mice" – and is currently banned for agriculture use in the across Australia.

The state has offered to provide it for free if the Australian Pesticides and Veterinary Medicines Authority approves it.

Bromadiolone kills rats and mice by preventing the blood from clotting and can be lethal from one day of eating the poison, according to the National Pesticide Information Center. 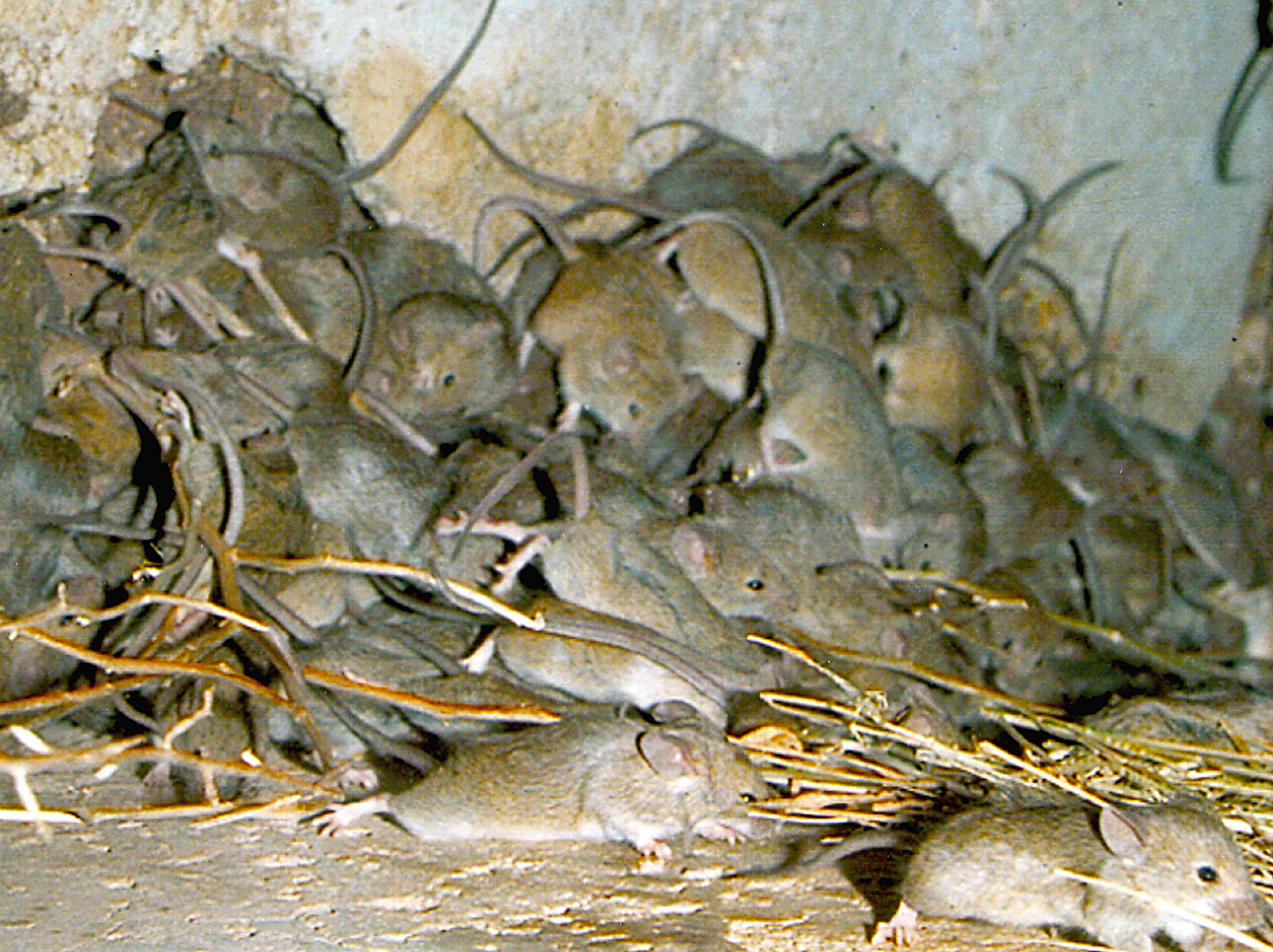 The plague of rodents have caused untold damage to Australia's eastern coast, decimating crops and chomping their way through food storage units.

The mice have also invaded homes, schools and hospitals as they thrive after heavy rain and hot and dry spells led to a bumper harvest.

A government-funded MouseAlert website shows mouse sightings have doubled since March – with a surge in cases in and around Sydney.

Channel 10 News Sydney claimed the mice could now be "marching towards" Australia's biggest city to "invade" by August.

Farmers have been sharing images and viral videos showing mice pouring out of grain feeders and storage plants.

One video previously published by the Sun Online showed mice pouring out of a silo as workers tried to clean it out.

The horror footage was shared on Twitter by ABC reporter Lucy Thackray, who said it started "raining mice".

“Even if grains in silos, mice can get to it," she tweeted.

Xavier Martin, a grain farmer from New South Wales, told The Telegraph: "After more than eight months of battling growing mouse numbers farmers are still waiting for state government assistance to hit the ground and offer some practical support to our farming community."