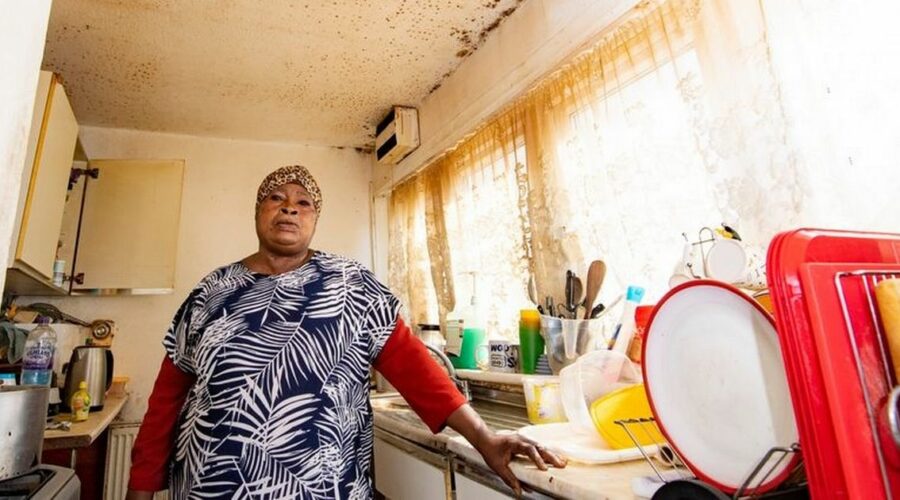 A family of five say that mice have been stealing supplies from their kitchen cupboards.

The Ahmad family, who live on the Eastfields Estate in Mitcham, London, were greeted by 10 mice on the day they moved in and constantly have them darting around kitchen worktops.

And they're not the only residents on the Eastfields Estate who have had problems.

Mice nests are so prevalent in flats on the south London development residents joke darkly the creatures "should be paying rent".

In addition to the mice, there are cockroach infestations, slugs in bathrooms and huge rats in communal areas.

Dark mould ripples through the walls of many buildings and the problem of water leaking into electric sockets, creating a potential death trap, are also very common, MyLondon reports.

Residents say they feel like they are living in "slums" that would "fail almost every health and safety standard".

They say the landlords, housing association Clarion Housing, have allegedly ignored their pleas for repair work for years.

Some have even been forced to take legal action to improve conditions including an ongoing case over Environmental Protection Act breaches due to go to court at the end of the month.

Responding to these allegations a Clarion Housing Group spokesperson apologised to residents "on its repairs performance".

They said: "There are some cases where we have fallen short of the standards they have a right to expect.

"Our immediate priority is to dedicate more staff to the estate, to increase the speed at which we complete both communal and individual repairs."

They added: "Homes on the Eastfields Estate are coming to the end of their life and are in need of demolition and regeneration.

"Subject to approval from the council, our long-term regeneration programme will see the area transformed.”

For the Ahmad family, moving from temporary accommodation in Crystal Palace to a rented property in Mitcham was a fresh start – or so they thought.

The family say they have lost count of the number of times they have complained to Clarion about living conditions on Eastfields, who allegedly responded with: "You’ve just got to deal with it."

Damp walls, leaks and mould that has grown so large it caused a hallway mirror to smash into pieces, are just some of the endless problems the family have encountered.

The family told MyLondon: "We had a dangerous leak for three years, three years with no solution. It’s not like we were sitting and doing nothing, we were constantly complaining, but we didn't get any help at all.

"If the water went into the fuse box, it could have caused a fire, but they (Clarion Housing) said they couldn’t move it.

"They said it was to do with money. If we didn’t take that step, that fuse box might have been the reason we wouldn’t be here today."

MyLondon also found multiple cases of other residents with dangerous leaks that had got into or around fuse boxes.

Kwajo Tweneboa, 22, has emerged as a leader for unhappy residents and has been on a mission to improve things for his neighbours.

Knocking on doors around his neighbourhood, he built a mountain of evidence documenting the terrible disrepair on the estate.

Following his campaign, Clarion’s Chief Operating Officer, Michelle Reynolds, sent a letter to everyone on the estate announcing that an office would be set up on-site for dealing with issues as well as a dedicated email address and phone number for reporting.

She also promised that Clarion would go door to door to hear people’s concerns.

Kwajo is shocked that it fell to him to push for change.

He said: "Why has it taken a 22 year old who works full time to cause this much fuss [by] going out door knocking?

"Why was it not done by the people who are paid to do it?"