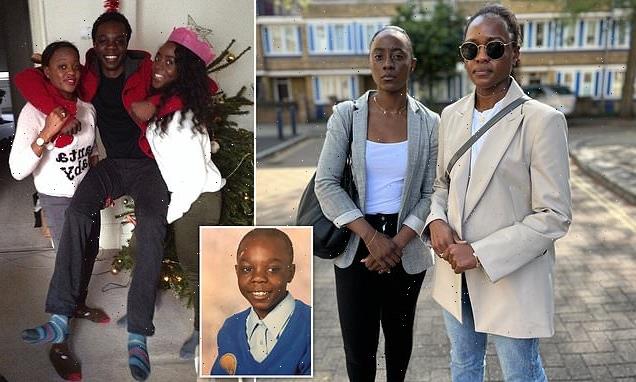 Family of black man, 20, who was shot and stabbed to death as he rode his bike in Peckham seven years ago accuse Met Police of racism over failure to find his killers

The family of a young black man who was stabbed to death in London seven years ago have accused the Met Police of racism over their failure to find his killers.

Ola Raji, 20, was gunned down and stabbed as he rode his cycle along an estate in Peckham, south London, near the centre founded in memory of murdered schoolboy Damilola Taylor.

His family spoke out on the seventh anniversary of the murder – as Crimestoppers announced a £20,000 reward for information leading to the conviction of Ola’s murderers.

Sisters Ruki Ware and Zainab Raji spoke out over the failure to bring the killers to justice and said the police would have given the case more attention if the victim had been white.

They have lodged a complaint with the Independent Office for Police Conduct alleging the Metropolitan Police probe was hampered by ‘cultural bias.’ 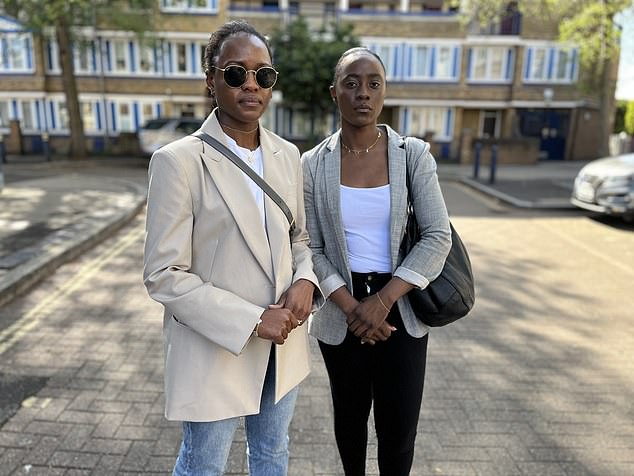 Zainabi, 35, who works in finance, said: ‘They did not look at it as if they might have had there been a white man who had been murdered and it may have been regarded as more shocking.

‘It was “another day, another murder”. We know London’s murder rates are ridiculous, but they are not looking at my brother’s murder with intent and a fresh pair of eyes. It was just another day at the office for them.

Two suspects were caught on CCTV fleeing the scene in East Surrey Grove around 10.30pm on April 21, 2015 and are believed to have made their getaway by car. Three people were later arrested but none charged.

Zainab said: ‘We want the case re-opened. Bringing everyone who played a part in his murder to justice is something we will strive towards until justice prevails. We have so many unanswered questions.

‘Growing up in south London it is unfortunately quite common to hear stories of people being arrested fairly or unfairly. 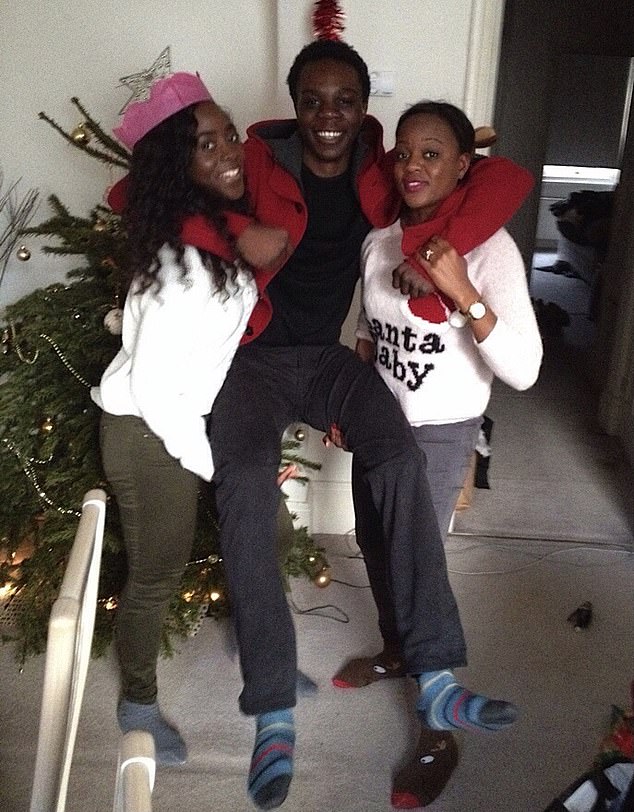 Ola Raji with his sisters Ruki and Zainab at Christmas. He was gunned down and stabbed as he rode his cycle along an estate in Peckham, south London, seven years ago

‘It is common to hear about attacks taking place, stabbings, knife crime and gun crime and that kind of stuff.

‘I believe there is an element of desensitisation which the police have had while looking at this case.’

Zainab said her brother, a devoted Manchester United fan, had watched Champions League football on TV when he received two calls on his cell phone. After the game had finished, she said, he cycled off to meet somebody, but did not seem stressed or worried.

She said: ‘He was murdered a couple of minutes from where he lived with our mother. But there is a period of 13 minutes where we don’t know where he was before it happened. No-one knows or has told us’

His sisters point out that their brother had no criminal convictions and believe he was ambushed in a case of mistaken identity.

She said she hoped the announcement today of a reward would help new information emerge and appealed for people to come forward, assuring them they would not have their identities revealed. 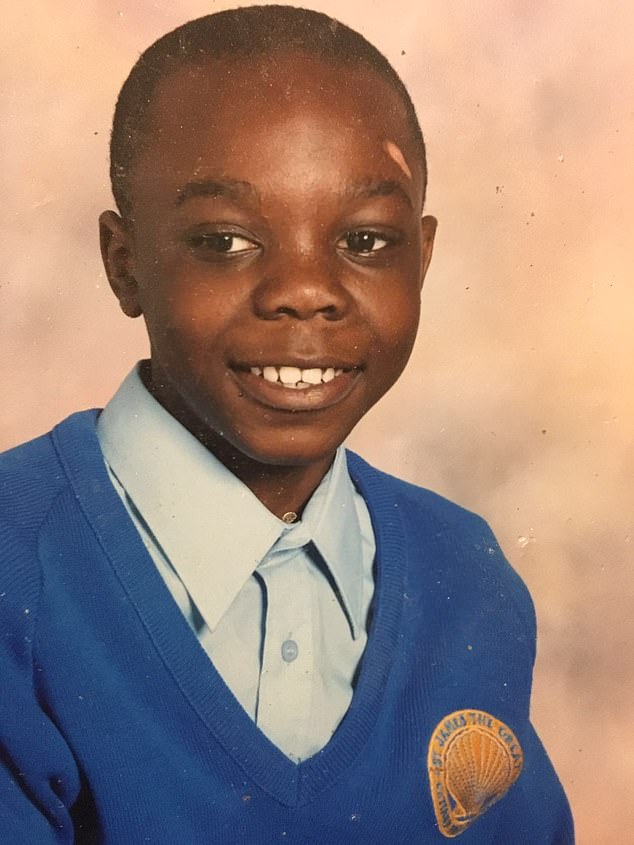 The family had been disturbed with the police’s initial remarks to them immediately after Ola’s death, but their frustration grew and suspected the fact that the victim was black meant the case wasn’t given full priority. Pictured, Ola as a schoolboy

One of the issues the sisters believe illustrate police racism in the case came when they came to tell the family he’d been killed.

Ola’s eldest sister Ruki, 37, who also works in finance, said: ‘We had two officers show up at my mum’s house to deliver the news.

‘They said to her “your son has been attacked and he is not in a good condition”. ‘And then the officer followed up with “Oh, you don’t seem very shocked at this news…were you expecting it?”.

They had been disturbed with the police’s initial remarks to them immediately after the college student’s death, but their frustration grew and suspected the fact that the victim was black meant the case wasn’t given full priority.

They were also unhappy with the gathering of evidential items, citing Ola’s door keys which they were initially told were missing only to be told a year later that they had been in his pockets.

Ruki said: ‘We thought that if they couldn’t find a set of keys from his pocket, how were they going to find DNA, gunshot residue or fibres? 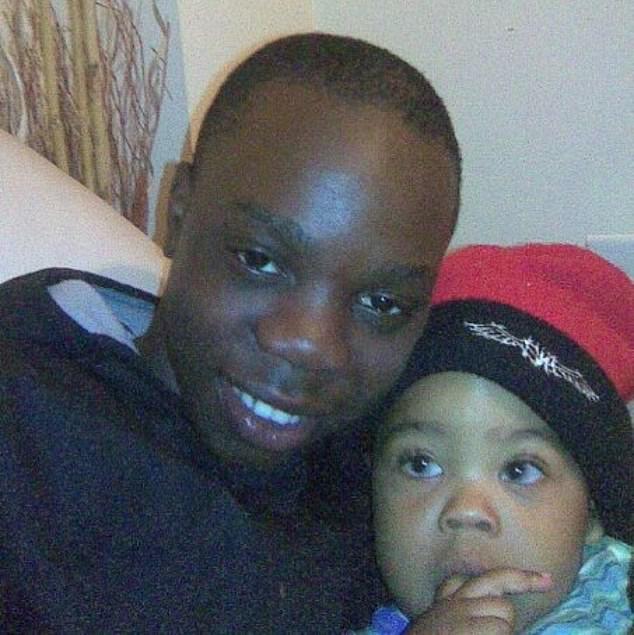 Crimestoppers has announced a £20,000 reward for information leading to the conviction of Ola’s murderers. Pictured, Ola with his nephew

‘There was a pattern emerging where I was thinking that the ball had been dropped a number of times along the course of this investigation.

‘It hasn’t filled us with confidence. We put a lot of trust into the police and believed we were working as partners with respect.

‘But we look at it now as if we have been in an abusive relationship where we should not have trusted them because there have been failings time and time again.

‘I believe they did not take this as seriously as they should have.’

Crimestoppers said: ‘As we offer this reward and launch this appeal, our thoughts are very much with Ola’s family and friends.

‘Despite his murder seven years ago, it’s still shocking to read of the circumstances and to know that whoever committed this violent act is still out there and has evaded justice.’

A Scotland Yard spokesperson said: ‘As with all unsolved murders, the investigation into Ola’s death remains open. All new evidence will be acted on and our officers remain committed to securing justice for the victim’s family.’