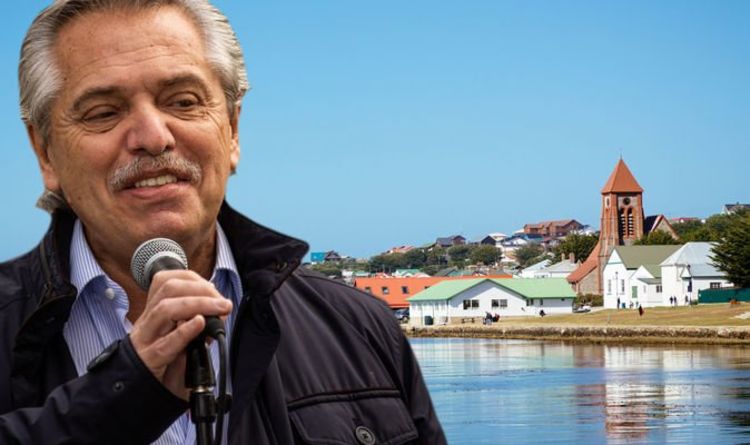 Argentine President Alberto Fernandez pressed the UK to accept that planes operated by Argentina’s biggest airline, Aerolíneas Argentinas, should bring family members from the Falkland Islands to the mainland for Christmas.

The foreign ministry, penning a letter to the British embassy, argued that the planes should go “directly to Punta Arenas airport or some other alternative airport in Chile.”

The ministry added that “most of the residents of the Malvinas Islands who need air service to the mainland are of Chilean origin.”

In the statement, the foreign ministry called the flights a “humanitarian offer”, called for the restrictions imposed by the COVID-19 pandemic to be considered in the decision.

They said that the flights would take “place in a context in which the regular flights connecting the Islands with the mainland have not been operational since March 2020″.

The statement continued: “Although this suspension exceeds the will of the Argentine authorities, the national government seeks to contribute to overcoming the negative consequences produced by the pandemic by making it possible for people living in the Malvinas Islands to travel to their cities of origin for personal, health or family matters.”

Over the previous two years, Argentina had pushed for regular flights between the mainland of South America and the Falkland Islands.

This comes after weeks of rumbling tensions between the UK Government and Argentina over the continued designation of the Falkland Islands as British territory.

In November, the Argentine minister tasked with the Falklands, Guillermo Carmona, called the UK’s ownership of the islands, known as the Malvinas in Spanish, as “one of the last vestiges of colonialism”.

He added: “It is an agenda that will be very much geared towards making the Malvinas issue not only a national cause, but also a regional cause and a global one in the face of the last vestiges of colonialism, which is the case of the Malvinas Islands.”

“The situation in the world demands it.”

The Falklands War erupted over the territory between the UK and Argentina in 1982.

It lasted ten weeks between April and June of that year, costing the lives of over 900 military personnel.

In the article, Mr Carmona is asked whether the renewed attempts to rally Argentines around the issue of the Falklands deliberately coincide with low approval ratings for President Alberto Fernandez – an accusation Mr Carmona rebuked.

However, Dr Christopher Sabatini, senior research fellow for Latin America, US and the Americas Programme at think tank Chatham House, told Express.co.uk: “Unfortunately – and it is unfortunate – Argentine governments, when they’re feeling threatened or politically with their backs against the wall in terms of domestic politics, they turn to the one thing that nationalistically people will rally around the flag for, and that’s the Falklands.”

Part of the reason the issue of the Falkland Islands can be hijacked for domestic political support in Argentina, suggests Dr Sabatini, is because it matters much more to the people of Argentina.

“I don’t think I’ve ever heard someone from the UK mention it when they talk about Latin America, except in the sense of, well, what are we going to do?

“It is still very much on their minds, whereas for most Brits that I’ve spoken to, it’s a resolved issue.

“It’s not on the table, it’s not up for negotiation, it’s simply something that they can approach in a way that could be addressed in a way without any drama.”

However, Mr Carmona insisted: “The issue is not closed because Argentina persists in its claim, the UN insists that there is a colonial situation that has to be resolved, and because the international community in general points out that it is an open issue.”