Anna Coffey got a call on Monday last week saying her father had suffered a serious stroke, and that he was being moved into the palliative care unit of a Melbourne hospital.

Within 48 hours, the Melburnian who is fully vaccinated against COVID-19 and in New York to study, was on the first plane she could get to Sydney without it costing her upwards of $10,000. 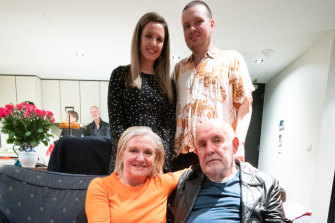 The 32-year-old figured that once she let authorities know her father John Coffey, 80, potentially had only days to live, the trip from Sydney to Melbourne would be relatively easy – maybe take a couple of days to organise.

Instead she’s been told by Victorian and NSW health authorities the only way she can travel to Melbourne is to charter a flight, she says at the cost of between $8000 and $10,000.

“In the past week, [my father’s] heart has stopped and they have no idea why, he’s had a stroke – at any second, he’s obviously high risk for another incident happening,” Ms Coffey told The Age. 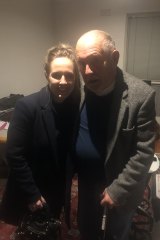 Anna Coffey and her father John, who is in a palliative care unit at a Melbourne hospital.

“[I want] some sort of other alternative to forcing people to have to pay $8000 to $10,000 to be transferred, especially when they’re vaccinated. [It] just seems extremely heartless.”

Ms Coffey said she had to wait until Friday, the day after her father got moved into the palliative care unit, to submit documents to Victorian and NSW health authorities explaining her situation, and that she needed to go visit him.

“When I submitted that off [on Friday morning], basically both of them have come back … relatively quickly, saying, ‘you need to provide more detailed documentation as to his condition’, which is kind of ridiculous,” she said.

“If someone’s in a palliative care facility, they’re end of life and, generally, people only spend 10 days in those types of facilities before they pass on. So, I don’t know why it’s necessary to have this other information.”

‘Being in palliative care, they don’t resuscitate … It could be in an hour, it could be tomorrow, it could be next week, I just can’t say.’

Ms Coffey said authorities had also asked that she show she had booked a charter flight. She expected to get documents back from the Melbourne hospital on Tuesday, as well as finalised quotes for charter flights.

She wanted authorities to let her drive to Melbourne but they had ruled it out, saying the trip would take between nine and 10 hours, with additional stops.

“It’s not realistic that the common person will just have $8000 sitting around that they can [use to charter a flight], on top of hotel quarantine, on top of the inflated flight prices that we’re dealing with,” Ms Coffey said.

“I mean, I’ve been a student for the past two years. It’s very challenging.”

Prime Minister Scott Morrison has written to Ms Coffey saying he hopes a solution can be found so she can see her father.

He said he hoped the Australian Health Protection Principal Committee could also find “practical solutions that balance compassion with the need to keep Australians safe”.

Ms Coffey anticipates she may not be able to get to Melbourne – where she’ll have to finish her 14-day quarantine in a hotel but may be escorted in PPE to visit her father each day – until this weekend.

“The fact that it’s taking days and days and days and there’s no end in sight is fairly shocking to me, especially when I feel like I’ve already provided enough information to be able to be transferred,” Ms Coffey said.

She said she wanted authorities to review the process for overseas arrivals coming into Australia on compassionate grounds. Ms Coffey was vaccinated against COVID-19 with the Moderna vaccine.

She has not been the only Australian based overseas who has raced home to try to see a dying relative.

James Turbitt flew from Belgium recently and was denied an exemption to travel from Melbourne to Perth to visit his sick mother before she died.

The 35-year-old said he applied for an exemption to be with her but was told that even if he was allowed out of hotel quarantine, he could not fly commercially or drive and would need to charter a plane to Perth.

In another case, American citizen Mark Kilian was granted an exemption from hotel quarantine in Sydney to visit his dying father in Queensland.