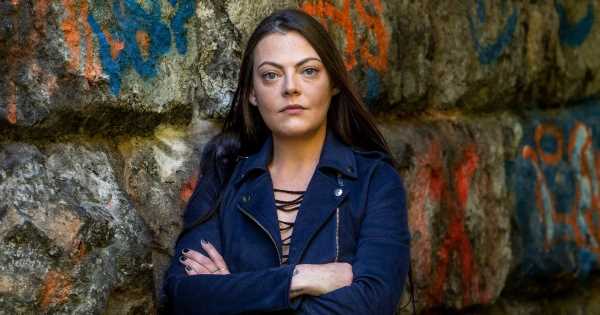 A vile thug forced his girlfriend to eat a mouse nest and ran over her in his Audi.

The woman tortured by her abusive partner, David MacDonald, was forced to eat the rodent nest and told how she was 'scarred for life' as the brute challenged his jail sentence.

Joanne Flanagan, 28, suffered horrendous physical and mental abuse at the hands of her older lover MacDonald, 38, who was sentenced to four-and-a-half years last month.

Aeronautical engineer MacDonald pushed her through a window, forced her to pick up broken glass with her bare hands and tore open stitches on wounds he had caused, and ran her over leaving her with metalwork in her body and massive scarring.

The teetotal brute inflicted such extreme violence on Joanne it left her with anxiety, PTSD, depression, flashbacks, insomnia, body dysmorphia, paranoia, and an 'impending sense of doom’.

In one incident at the house in Dalkeith, Midlothian, she went up to their bedroom and then went downstairs to try to appease MacDonald and leaned into the car window to try to kiss him.

She said: "He was still in gear and took off, as he took off I said 'oh my God my foot's there – he ran me over, I was on the ground under the car, my body was under the tyre.

Joanne had known him since 2013 when he was married to one of her pals, and started dating him three years later after the marriage ended and he moved into her spare room.

Joanne said: "All I seem to read about domestic abuse is drunk men in court for lashing out but it’s not always a chav with anger issues, it’s a posh, professional, family man who plans out his attacks with pre-planned cover stories to tell NHS staff."

"He is a true danger because he is able to hide his true self. He isn't just a domestic abuser, he's a psychopath."

"He would describe himself as 'debonnaire, his WhatsApp status said 'I wake up in the morning and p**s excellence'."

"He put an ad on Gumtree when he must have been selling the car preparing to go to prison he put 'this is my 37th Audi', I think it was a prestige to him."

During the relationship from June 2016 until November 2018, MacDonald controlled every aspect of Joanne's life, including her finances and how she dressed.

In 2018 he forced her to eat a mouse nest as a punishment because he thought Joanne had been secretly eating snacks, which he was also convicted for.

Surgeons fitted metal plates in her foot and ankle to fix it at the Royal Infirmary of Edinburgh in July 2017 and Joanne lost a job because of absences from work.

After ending the relationship Joanne fled to a Women's Aid shelter, and lost three stone in weight due to the stress.