Czech MEP Jan Zahradil insisted increased integration among European Union member states is not the “universal response” to every problem as he laid out plans to “scale back” Brussels’ influence. Mr Zahadril appeared to tear apart plans outlined and supported by current European Commission boss Jean-Claude Juncker, whose seat the Czech politician is seeking to take over in November. The top Eurocrat has repeatedly urged EU countries to come closer together and dial-up efforts for further integration across the bloc.

Facing off fellow candidates in the European Parliament in Brussels, Mr Zahradil said: “I think the main problem is that ordinary people in European countries who do not care about every day’s politics are somehow tired of endless European integration.

“They feel the EU is interfering in their everyday lives, that it is threatening their traditional way of life, their social customs, and thing like that.

“I’m in favour of European integration and European union as well, I want a Europe that is doing less but better. Slimmer, scaled back, flexible, decentralised. 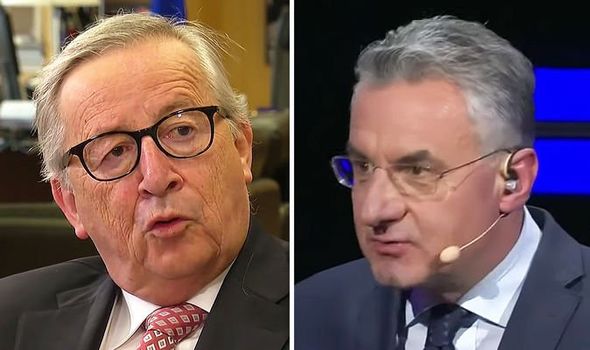 During his State of the Union address in September 2017, President Juncker called for greater EU integration, including an EU president combining the role with that of the head of the European Council, as well as a eurozone finance minister, a Brussels intelligence agency, European anti-terrorism prosecutor and an agency to enforce labour standards.

Mr Zahradil also took a not-so-veiled dig at the European People’s Party (EPP) and Socialist parliamentary group for failing to heed the calls for reform many member states have put forward over the years.

He added: “Unfortunately the EPP and Socialists that were running European business for the past 25 years won’t come forward with some genuine change, I believe.”

Citizens from across the European Union will be called to the polls between May 23 and May 26 to select the latest batch of MEPs to represent them in the European Parliament.

Following their election, the MEPs will be required to confirm the presidential candidate selected by the European Council to lead the executive branch of the EU.

Jean-Claude Juncker will be retiring in November after five years at the head of the Commission.

The European Council will be selecting a candidate from the ones put forward by the European parliamentary group based on the results of the European elections in May.

Mr Zahadril will be contending for the presidency with the likes of Manfred Weber, a member of Angela Merkel’s CDU, and Brexit coordinator Guy Verhofstadt.

Mr Verhofstadt is one of the highest-profile candidates for the EU’s top job and said he wants to reform the way the bloc is run.

But despite his fervent support for the European project, the former Belgian Prime Minister admitted to doubts on the direction the EU is taking.

Speaking to Euronews, Mr Verhofstadt said: “I’m not at ease with the direction of the EU either. That’s the reason why I say I’m maybe the first Eurosceptic of Eurosceptics in the EU.

“I think that this EU as it works today, or as it doesn’t work today, will not even survive the 21st century.

“But the solution to the challenges we are facing today is not to go back to the nationalist and populist rhetoric of the 20th century.”