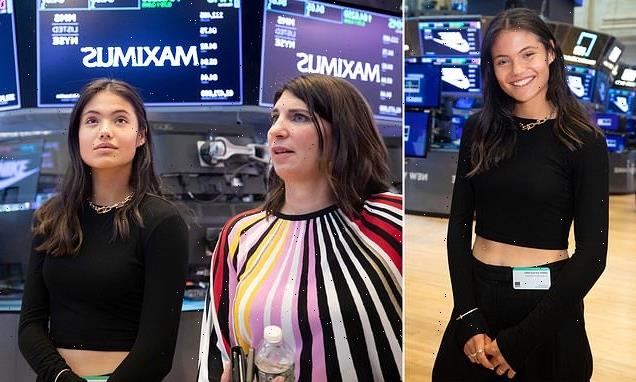 Emma Raducanu’s stay in The Big Apple after her historic US Open win continues as she visited the New York Stock Exchange and said it was on her ‘bucket list’ after getting an A* in maths and an A in economics in her A-levels this summer.

Miss Raducanu, whose parents both work in the City of London as currency market traders, has admitted to still being on ‘cloud nine’ after her stunning victory and plans a few days of rest before she is back playing tennis again.

It was only Raducanu’s second appearance at a major and the new world number 23 has made headlines across the globe, appeared on various TV channels in the United States and she also attended the Met Gala on Monday.

MailOnline also revealed she has been spending time with old friend and former British tennis protege Benjamin Heynold, 19, who is studying in the New York and was seen hugging her in front of one of her new Nike billboards in Times Square.

Today she ticked off another long-term aspiration when she visited Wall Street. ‘I am on cloud nine but so excited to be here on New York Stock Exchange. It was one of the places on my bucket list before leaving New York and I’m just so excited and grateful to everyone who made this possible,’ Raducanu told CNBC’s Closing Bell programme.

‘I have a few days’ rest and recovery (coming up), I think needed after the last seven weeks but then I am straight back to training and hungry to get better and come back out and play some more tournaments.’ 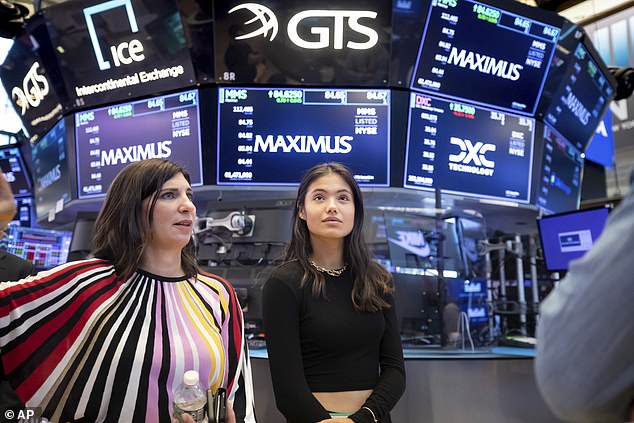 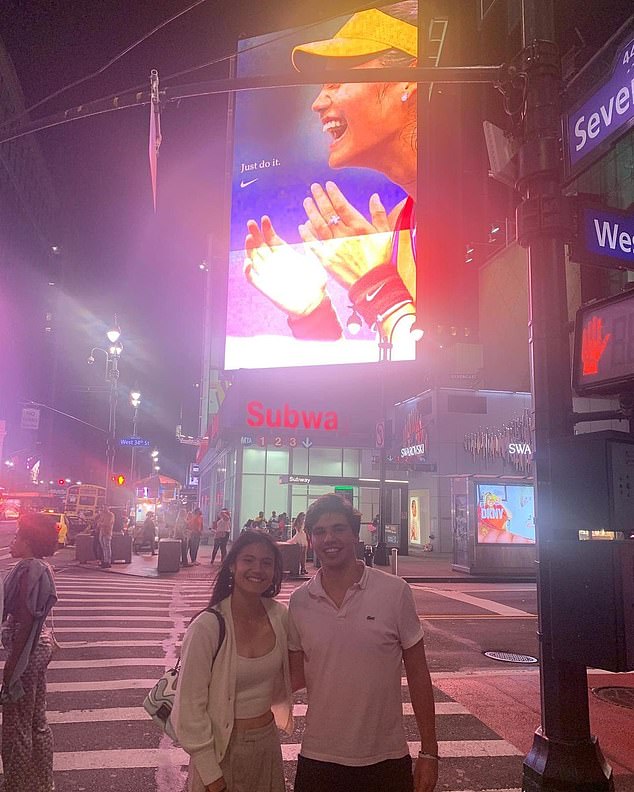 Following her victory at the Arthur Ashe Stadium on Saturday, Miss Raducanu, 18, posed with her old pal Benjamin Heynold for a photo beneath a Manhattan billboard celebrating the city’s new Grand Slam star

Raducanu only completed her A-levels earlier in the summer, achieving A* in mathematics and an A in economics at Newstead Wood School in Orpington.

The teenager revealed she always had a big interest in the New York Stock Exchange, adding: ‘It is something I have been studying at school, in my A-levels. I just always had a keen interest. My parents were both in finance and to see it live is incredible.’

Weeks after Raducanu sat her exams, the Toronto-born ace shone at Wimbledon, making the fourth round in impressive fashion before she was forced to retire from her last-16 match with Ajla Tomljanovic on Centre Court owing to breathing difficulties.

John McEnroe, a three-time winner at the All England Club, said at the time he felt the occasion ‘got a little bit too much’ for the wildcard and linked it to Naomi Osaka’s mental health difficulties.

Raducanu responded emphatically on court in America and showed her newly improved physicality by not dropping a set in Flushing Meadows, having had to come through qualifying to make the main draw.

Asked in an interview with CNN’s Christiane Amanpour what he meant by his comments back in July, McEnroe said: ‘I meant exactly what I said.

‘I tried to relate it in a small way to my experience when I first went to Wimbledon, also at 18, and managed to qualify, like Emma did, get through to the semis.

‘She did better than I did. I played Jimmy Connors, I hadn’t been on the Centre Court and I remember my legs shaking, feeling totally overwhelmed by the experience and almost happy that I didn’t win.

‘Subsequently I went to Stanford for a year and had some time to sort of regroup mentally and prepare for the rigours of the tour.

‘There’s a lot of great upsides, but there’s also pressure you put on yourself and expectations that others put on you.’

McEnroe was criticised heavily at the time for his comments, but insisted that ‘compared to a lot of other things that I have said in the past, that was about, to me, as vanilla as they come’ and stressed: ‘I was very supportive of her, I thought, at the time.’

He added: ‘More importantly than what I said, I think, is how she handled it moving forward, because I’m sure there was a lot of concern in the British tennis association, along with people in her family and the people that work with her, how is she going to be able to handle this sort of newfound fame?

‘I don’t think you could possibly do it any better than she did it. Win the US Open? Are you kidding me? That’s insane, in that she’s been able to do this.’

America’s tough Covid travel rules meant Britain’s latest tennis superstar was robbed of the chance to celebrate with her family.

Yet it seems there was some support from back home in the Big Apple after all – for the Mail can reveal that Miss Raducanu was cheered on to victory by a friend she’s known since the age of six.

Former tennis protege Benjamin Heynold, 19, has been by Miss Raducanu’s side throughout her stunning – and swift – rise to global stardom, having moved to the US to study. 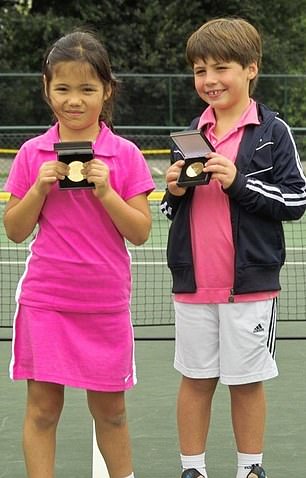 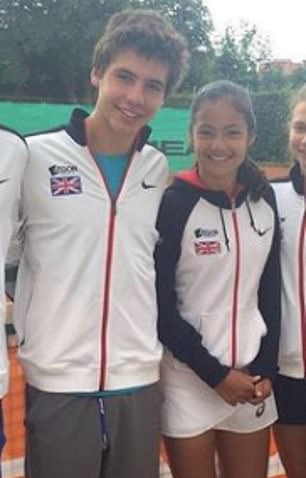 Former tennis protege Benjamin Heynold, 19, has been by Miss Raducanu’s side throughout her stunning – and swift – rise to global stardom, having moved to the US to study 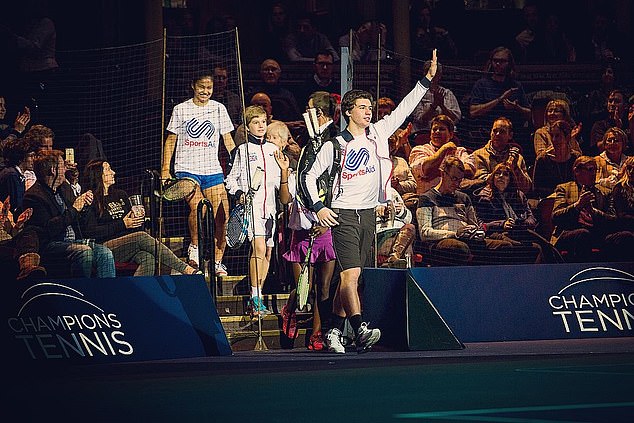 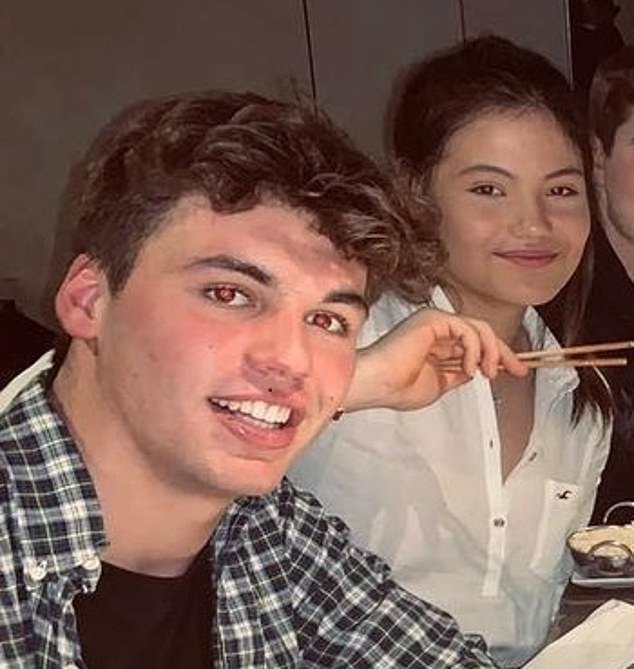 The taste of success: Miss Raducanu wields chopsticks as they share a meal together 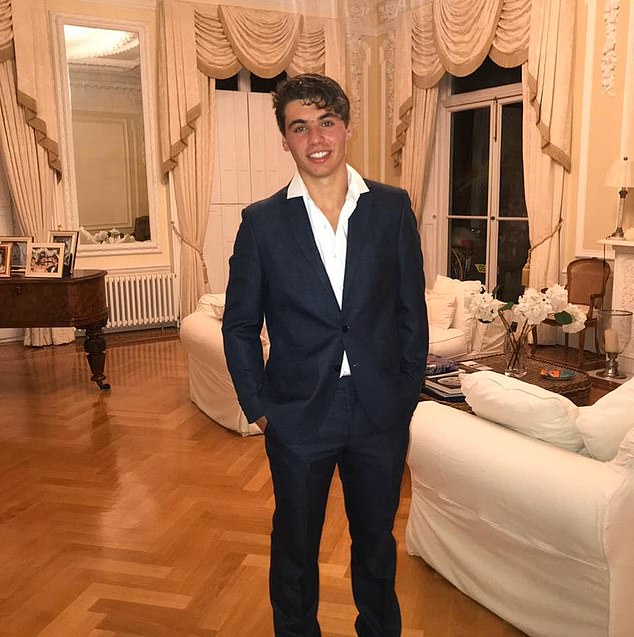 Raducanu shares posts of her at the Met Gala

Emma Raducanu has shared two photographs of her at the Met Gala.

The young tennis sensation posted the pictures on Tuesday of her time during the event on Monday.

She wrote next to two pictures of her in a Chanel dress: ‘About last night…’

Following her victory at the Arthur Ashe Stadium on Saturday, Miss Raducanu, 18, posed with her old pal for a photo beneath a Manhattan billboard celebrating the city’s new Grand Slam star.

Mr Heynold posted the image on social media along with a heartwarming picture of the pair as young children holding tennis medals.

The friends met more than a decade ago through their mutual love of the sport, playing together in competitions across the country in the junior ranks and both making the Great Britain squad.

In 2017 the pair had their first taste of playing in front of a large crowd, taking part in a charity event at the Royal Albert Hall.

The day saw them pose for a photo with former British number one Greg Rusedski, who this week backed Miss Raducanu to win multiple Grand Slams.

While Miss Raducanu bagged her first trophy at the weekend, Mr Heynold appears to have pursued a different path.

Once tipped for sporting stardom himself, he is understood to have taken a step back from top-level tennis and is now studying in the US.

That allowed him to be by his childhood friend’s side – unlike Miss Raducanu’s family back in Bromley.

While she grew up in south-east London, Mr Heynold – the son of a managing director at an international investment banking firm – was raised in a sprawling private estate near Chertsey, Surrey.

He was educated at TASIS England – formerly known as The American School – where day fees for secondary school pupils start at around £20,000, rising to almost £50,000 for boarders.

Miss Raducanu has also found some time for an Old Etonian, too – for yesterday saw the Prime Minister speak to the tennis sensation for the first time following her stunning victory.

Boris Johnson congratulated Miss Raducanu in a phone call as she continued to soak up the atmosphere in New York following her debut at the Met Gala.

A Downing Street spokesman said the Prime Minister ‘praised her determination, skill and mental strength during a series of tough matches, and said the whole of the UK had united behind her success’.

They added: ‘Both the Prime Minister and Emma agreed on the importance of continuing to support grassroots tennis, and in encouraging young people to take up the game.’