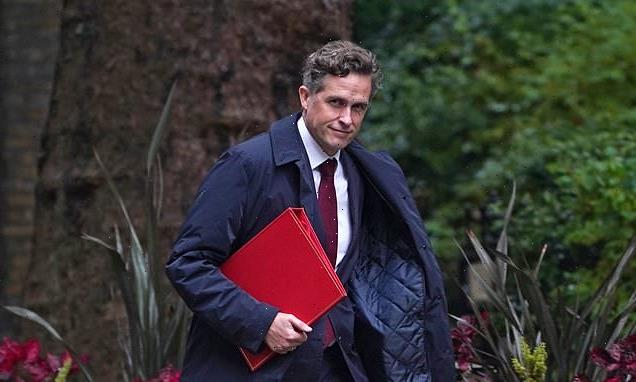 Gavin Williamson has been sacked as Education Secretary after coming under repeated pressure to resign over his handling of disruption to schools during the pandemic and the fiasco around grading of GCSE and A-level students amid cancelled exams.

His tenure, which started in 2019, featured a number of gaffes including overseeing last year’s school exams debacle, being accused of ruining the credibility of this year’s A-Levels after a soaring grade inflation and confusing Premier League footballer Marcus Rashford with England rugby international Maro Itoje.

And today it ended as Boris Johnson removed the 45-year-old MP for South Staffordshire from his top team as he kicked off a dramatic reshuffle which also saw Robert Buckland and Robert Jenrick among the victims.

Mr Williamson said it had been a ‘privilege’ to serve as Education Secretary and that he looks forward to ‘continuing to support the Prime Minister and the government’. 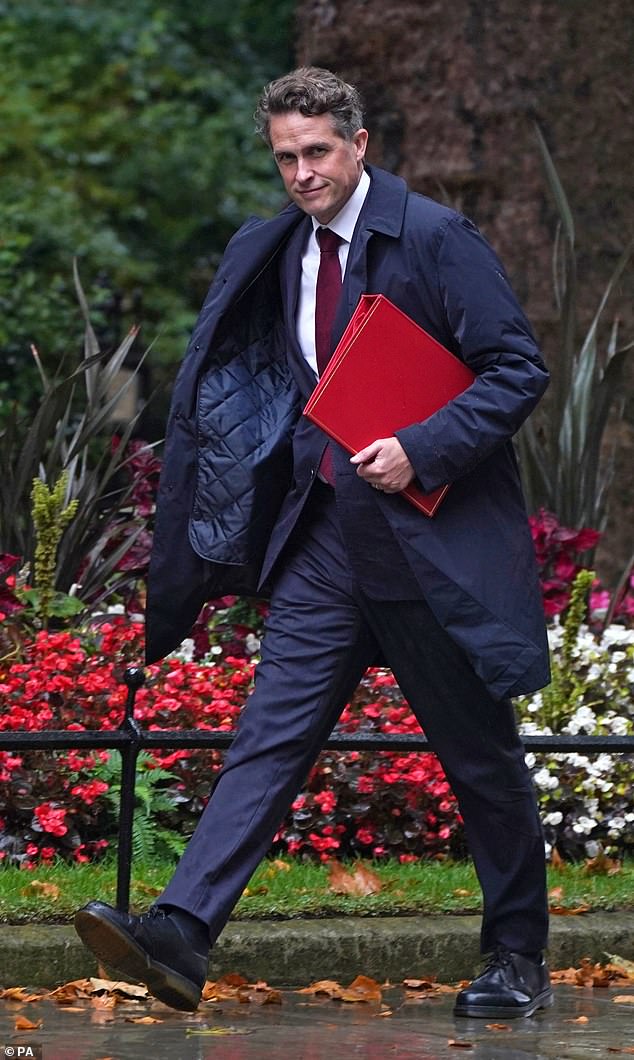 Gavin Williamson was today sacked as Education Secretary, a role he has held since July 2019. He had come under repeated pressure to resign over his handling of disruption to schools during the pandemic and the fiasco around grading of GCSE and A-level students amid cancelled exams 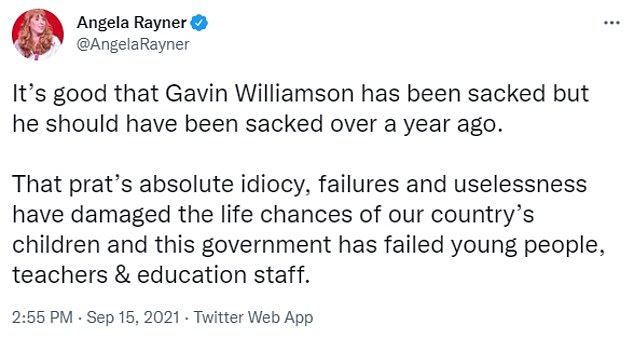 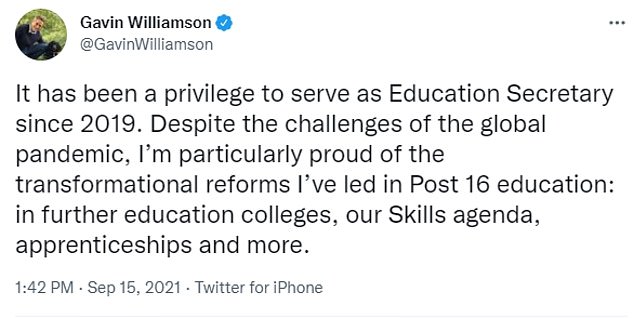 Born and raised in Scarborough, Mr Williamson went to a local comprehensive school and sixth-form college before studying at the University of Bradford.

His state school background was not enough to win over many teachers, students and parents during the Covid-19 pandemic, which dominated Mr Williamson’s time in office and led to a series of U-turns.

News of Mr Williamson’s sacking was welcomed by Labour MPs, with Angela Rayner calling him a ‘prat’.

The Shadow Chancellor of Duchy of Lancaster said: ‘It’s good that Gavin Williamson has been sacked but he should have been sacked over a year ago.

‘That prat’s absolute idiocy, failures and uselessness have damaged the life chances of our country’s children and this government has failed young people, teachers & education staff.’

MP Sarah Owen added: ‘Not a mention or thanks to teachers or support staff. Or any humility for putting parents & pupils through hell during the pandemic. If Johnson had a backbone, Gavin Williamson would have gone long before now.’

Talk in Westminster of Mr Williamson’s sacking had been swirling for weeks after being regarded by many as having bungled schools and exams during the pandemic.

Last month he was said to be ‘wetting himself’ over reports that Boris Johnson was lining up his ‘anti-woke’ Equalities Minister Kemi Badenoch to replace him in the Cabinet. 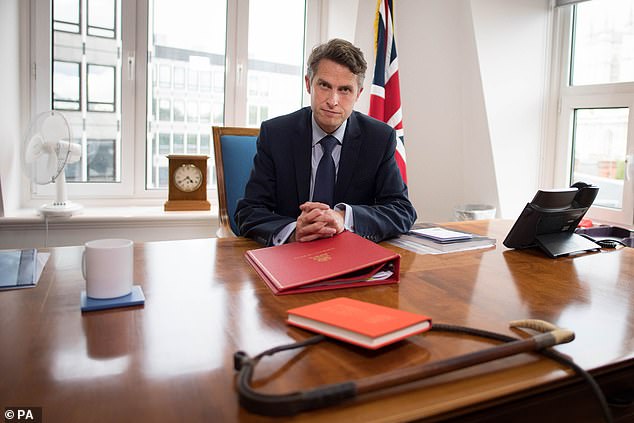 Mr Williamson, here pictured in his office at the Department of Education, said it had been a ‘privilege’ to serve as Education Secretary and that he looks forward to ‘continuing to support the Prime Minister and the government’

He was also given the nickname ‘Private Pike’ by critics who compare him to the hapless young soldier in Dad’s Army.

After it was revealed that A-level grades could be scrapped in a massive overhaul of the education system, which would see the current A*-E letter grades replaced with a numerical system similar to GCSEs, Mr Williamson reportedly told allies ‘he knows where the bodies are’ and that the PM was ‘too weak’ to sack him.

Whether the threat was genuine was questioned by many after he said on live TV that he could not remember his A-Level results.

He was appointed Education Secretary after Boris Johnson’s election as Prime Minister in July 2019.

After closing schools in March 2020 because of Covid, and then cancelling that year’s GCSEs and A-Levels, he faced calls to resign – and was likened to accident-prone British TV character Frank Spencer – after the Government was forced into a U-turn following protests over the downgrading of thousands of results.

He also received criticism over the recovery plan to help pupils catch up and confusion around children returning to class amid Covid-19.

In December, heads and unions were not happy when Mr Williamson threatened legal action against Greenwich council if it failed to keep its schools open to all pupils until the end of term, despite a rise in cases.

Mr Williamson also faced calls to step down amid criticism of inadequate free school meal provision for pupils, and again after the schools catch-up tsar resigned over the Government’s £1.4 billion education recovery fund.

Last week, Mr Williamson mistook Rashford for Itoje. He said he had met Rashford via Zoom, but it later transpired it was rugby player Itoje he had spoken to.

In a statement, he said the ‘genuine mistake’ was due to both men having campaigned on children and said he had ‘huge respect’ for them.

But critics branded the mix-up ‘racist’ and pointed out the two have little in common aside from their ethnicity, as some speculated whether the gaffe was the ‘final nail in the coffin’ as he looked set to be replaced as Education Secretary. 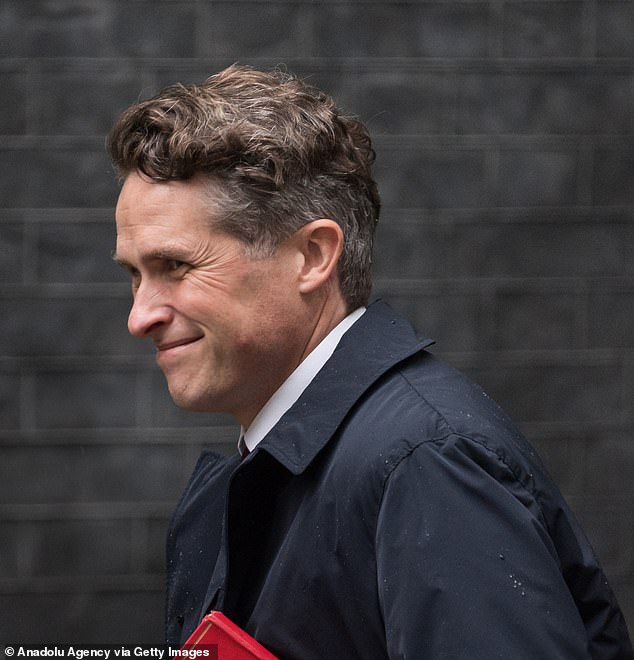 It is unclear whether he will take another cabinet role, but Mr Williamson is no stranger to ministerial posts.

Before entering the Cabinet, Mr Williamson was the party’s Chief Whip and tried to cultivate a sinister image with veiled threats to rebellious Tory MPs – accompanied by his pet tarantula Cronus. He also famously was photographed with a whip on his desk.

It was in that role he warned unruly MPs that he took a ‘carrot and stick’ approach to discipline in the Commons.

In 2017, he was appointed Defence Secretary by then-Prime Minister Theresa May following the resignation of Sir Michael Fallon.

At the height of the furore over the Salisbury Novichok attack in March 2018, Mr Williamson urged Russia to ‘go away and shut up’.

In 2018 he risked a diplomatic row with France over the Syria conflict, by saying: ‘What is the point in listening to French politicians?’

The same year he took the unusual step of confessing to cheating on his wife in 2004.

He admitted he kissed a colleague when he worked as a manager at fireplace but it ‘never went further’.

In May 2019 Theresa May sacked him as Defence Secretary over the leak of sensitive information about phone giant Huawei from the National Security Council – although he has always denied involvement.