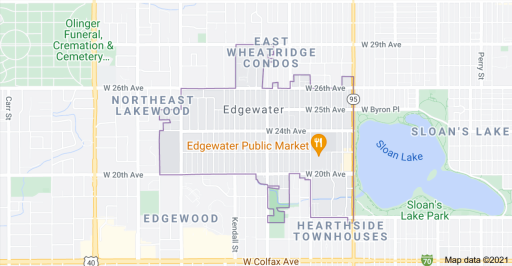 Edgewater is a mini urban oasis that offers homebuyers a mix of housing options at slightly more affordable prices than other Denver-area neighborhoods.

Although some people might think Edgewater is a Denver neighborhood, it’s a small (approximately 1 square mile) town located on the western shore of Sloan’s Lake that’s nestled between Denver, Wheat Ridge, and Lakewood.

She compares what’s happening now in Edgewater to what happened five years ago in Sunnyside. “You see new development with empty lots being built into new homes, and older homes are being renovated or remodeled.”

With prices ranging from the $400,000s to $700,000, Edgewater offers a mix of housing options, from traditional ranch-style houses built in the 1950s and 1960s to new townhomes and condos that appeal to younger buyers.

“I would recommend buyers looking at Edgewater to keep an open mind,” Carlson says. “There’s a lot of potential, but you’ll need to be ready to give a house a facelift or customize the interior to meet your needs.”

Get to know Edgewater

The community’s development has been tied to Sloan’s Lake, created in 1861 when Thomas Sloan dug a well that overflowed, flooding 200 acres. Edgewater gets its name from its proximity to the lake.

By the early 1900s, Edgewater had a post office, a school, and a few stores on 25th Avenue, which remains the community’s main street.

Edgewater’s historic 25th Avenue, with its collection of businesses including Joyride Brewing and Sloan’s Bar and Grille, creates a walkable area that helps make the community feel like a small neighborhood, Carlson says.

The news and editorial staffs of The Denver Post had no role in this post’s preparation.