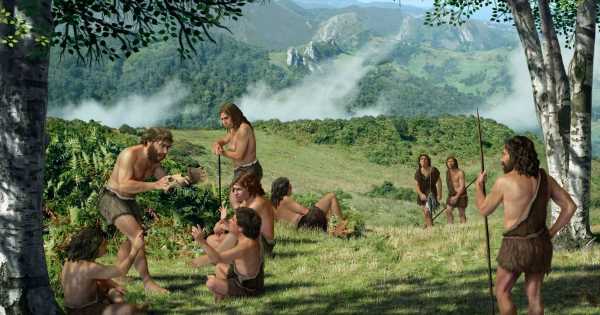 Earth is due another "magnetic disaster" similar to the one that wiped out the Neanderthals, scientists have warned.

They claim the apocalyptic event, which left the planet exposed to cosmic radiation from space after its magnetic field collapsed, could happen again.

The phenomenon happened 42,000 years ago when the planet’s magnetic poles flipped.

It caused the magnetic field – which protects Earth from deadly particles emitted by the sun – to dramatically weaken.

Researchers from the University of New South Wales say it caused lightning storms, "crimson skies" and extreme UV radiation, while the ozone layer was destroyed.

The disaster sparked major climate shifts that led to mass extinctions, according to the scientists.

They are now concerned there could be an upcoming reversal of the poles.

Professor Christopher Fogwill, from Keele University who was a coauthor on the study, said: “We suspect there is something on the way. It's logical.”

Professor Chris Turney said: “We essentially had no magnetic field at all – our cosmic radiation shield was totally gone."

He added that "unfiltered radiation from space" caused "a ripple of climate change across the globe".

Lightning strikes would have caused waves of wildfires, while the Neanderthals were cleared out in Europe.

In Australia, every animal larger than a kangaroo vanished, the Times reported.

Humans are thought to have been able to adapt to the ravaged planet, with cave art suggesting they sheltered from UV radiation outside.

Professor Alan Cooper, from the South Australian Museum, said: “It must have seemed like the end of days.

“If a similar event happened today, the consequences would be huge for modern society.

Scientists discovered the timing and impacts of the disaster by analysing the carbon content of ancient kauri trees in Zealand.

They have dubbed it the "Adams Event", a nod to science fiction writer Douglas Adams.

In his book The Hitchhiker's Guide to the Galaxy, he suggested the number 42 was the answer to life, the universe, and everything.

Researchers found the growth of ice sheets and glaciers over North America, along with tropical storm systems, could be traced back to the event.

The study was published in the journal Science.

19/02/2021 World News Comments Off on Earth due another ‘magnetic disaster’ that killed Neanderthals, scientists warn
Markets