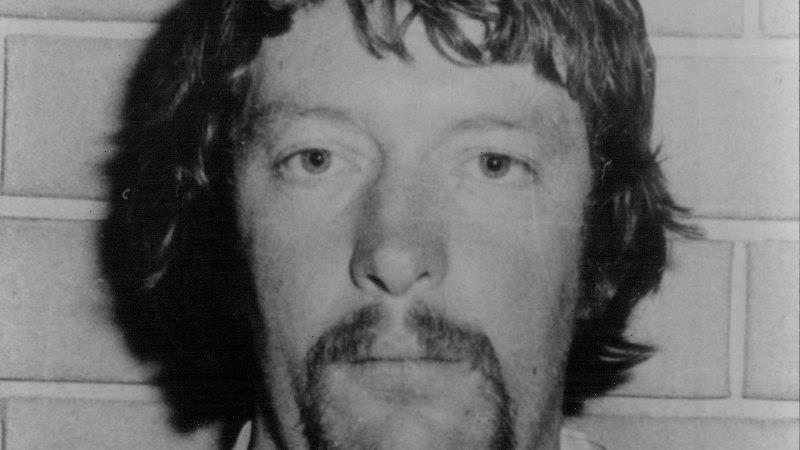 The world of crime is full of myths.

They talk of the code of silence when the underworld is full of snitches, of honour among thieves when most would steal the gold tooth from their mother’s dentures, and undying loyalty when you are more likely to be killed by a “friend” than an enemy. 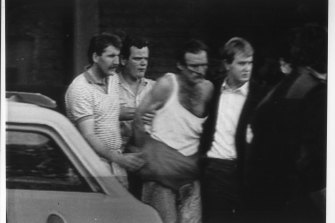 Russell Cox (in singlet) during his arrest in 1988.Credit:

Crooks come together for mutual convenience but when they fall out the fallout can be fatal.

Yet, there have been partnerships, some that lasted the test of time and others that ended badly.

1) Australia’s most successful fugitive, Russell Cox, was on the run from a NSW maximum security prison from 1977 until 1988, when he was arrested by the armed robbery squad at Doncaster Shoppingtown.

During those 11 years his partner in crime was his long-time girlfriend, Helen Deane.

In between armed robberies they lived as Kevin and Sharon and were considered ideal tenants because they were so quiet. She loved knitting, he loved reading (and planning stick-ups).

When Cox was wounded in a shootout with his armed robbery partner Ian Revell Carrol, who was left dead, Deane, a former nursing aid, patched him up until they could get to a doctor in NSW.

When Cox appeared in court Deane was arrested outside armed with a pen pistol. They married in prison, and after he was released lived happily ever after.

2) Peter Gibb and Heather Parker had a torrid affair. Nothing wrong with that except Gibb was an inmate and Parker a prison officer, which made romantic dinners a little difficult. She smuggled in explosives that Gibb and his crime partner, Archie Butterly, used to blast their way out of the Melbourne Remand Centre. Butterly was badly wounded in a car crash after the escape. 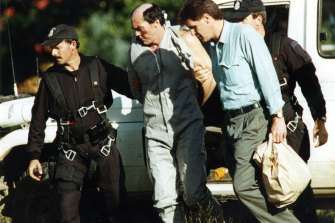 When cornered by police, Butterly wanted to fight it out to the death. He lost the vote with the other two, and as a consequence, one of them shot him in the head. Democracy at work.

Rogerson shot and killed Lanfranchi claiming the dealer threatened him with a gun – it was defective and 90 years old. (Rogerson is now in prison, a defective former detective who is 81 years old.)

Smith gave evidence for Rogerson at the inquest. Lanfranchi’s girlfriend, Sallie-Anne Huckstepp, campaigned for the case to be reopened as a murder investigation. She was found dead in a lake in Centennial Park, Sydney, in February 1986 – strangled and held underwater in the shallows by Neddy.

Under Federal Police surveillance, Neddy and Rogerson slapped each other with wads of $50 notes. Neddy died in jail and Rogerson looks like going the same way. 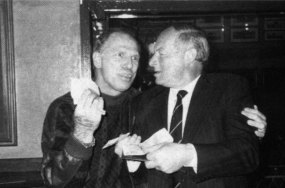 Arthur Stanley “Neddy” Smith with corrupt detective Roger Rogerson. Slapping each with $50 notes at a Chinese restaurant. The sweet before the sour.

4) Gangsters often dominate the headlines, but about 100 years ago it was a couple of cops who fascinated the public as Victoria’s real-life version of Sherlock Holmes and Doctor Watson.

Fred Piggott joined the police force in 1888 at the end of the bushranger era when a grade four education was sufficient to join the force. Piggott was the first to embrace forensic science, studying blood splatters and insisting on photographing crime scenes.

Eventually, Piggott and fellow detective John Brophy became the go-to team on the big cases. Piggott was tall and lean, wore a bowler hat, had a white rose in his lapel and carried a gold-topped cane. Brophy was a short, heavy, knockabout Irishman who would later bring scandal to the force.

Their success rate was so impressive they inspired the chant, “Ashes to ashes, dust to dust; If Piggott don’t get you, then Brophy must.”

Not that they were perfect. They were called into investigate the murder of Alma Tirtschke, 12, and arrested Colin Campbell Ross who maintained his innocence. The key piece of evidence was hairs found on Ross’ mattress declared to be from the victim. Ross was hanged. But 75 years later when the hairs were re-tested, it was found they were not from Tirtschke.

Brophy became CIB Superintendent, and in May 1936 was shot three times while parked in a car in Royal Park with two women. Despite the seriousness of the wounds – to one arm, cheek and the chest – the first version was that he accidentally shot himself (three times?). 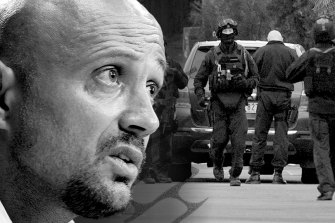 Christopher Binse became a master armed robber after doing an apprenticeship as a crook under his dad.Credit:Fairfax

5) Master armed robber and escape artist Christopher Dean Binse’s father, Steven, taught him to be a crook. In one escape Binse was taken to the secure unit of St Vincent’s Hospital from Pentridge with self-inflicted knife wounds. Binse’s dad turned up and behind his large metal belt buckle hid a small pistol that Binse used to escape. It was one of six successful escapes. Dad must have been proud.

6) Identical twins Peter Kay and Douglas Kay Morgan committed a series of armed robberies on TABs and banks in country Victoria. One would pull a job, and then the other would pull another a distance away to lure police away. Both expert bushmen, they escaped on foot, horseback, bikes and in canoes. The funny thing is they didn’t like each other.

Douglas Kay Morgan aka the After Dark Bandit, being taken to Russell Street police headquarters in 1979.Credit:Fairfax

7) For years Alphonse John Gangitano and Jason Patrick Moran were thick as thieves (they were often thick and associated with thieves). Both could be charming, ambitious and always ruthless. Gangitano was a glorified standover man while Moran was a drug dealer. In the end their volatility proved fatal.

When they ran amok in a sports bar in Kings Street, bashing patrons for no good reason, Moran was later caught on a police bug saying of Alphonse, “He’s a f—ing lulu … if you smash five pool cues and an iron bar over someone’s head, you’re f—ing lulu.” 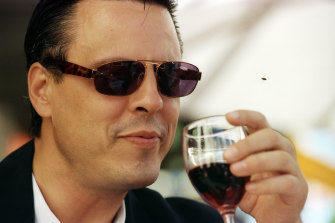 On January 16, 1998, Gangitano was visited by Jason at his home in Glen Orchard Close, Templestowe. There was an argument and Alphonse ended up shot dead. Jason continued to use his gun to win arguments. Twenty months later, he shot and wounded drug dealer Carl Williams. This was an error of judgement because in 2003 Williams organised Moran’s murder at the Essendon North Auskick.

8) Carl Williams rose from being a supermarket shelf-stacker to a major drug manufacturer and gangster who gave himself the nickname “The Premier” because he claimed he ran the state. Andrew “Benji” Veniamin rose from a western suburbs hood to paid hitman, employed regularly by Williams. Neither needed to invest in superannuation as Veniamin was shot dead in a Carlton restaurant and Williams bashed to death in prison. 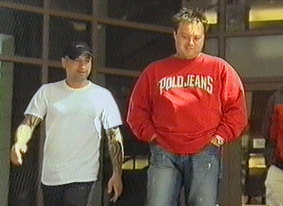 9) Long before Underbelly made gangsters glamorous Freddie “Frog” Harrison and Normie Bradshaw put the cool in Melbourne crooks. The pair were gunmen and standover-men who were the first to try and look like Hollywood gangsters.

Then crime reporter Tom Prior found the best (and safest) place to find the two was at the Forum Cinema at the first matinee session of the latest Jimmy Cagney or George Raft gangster movie.

While they were close, Bradshaw hated his nickname “The Chauffeur,” because he was much more than Harrison’s driver.

When Sydney gangster Percy Neville tried to muscle into Melbourne Bradshaw and Harrison were waiting. Tipped off when Neville demanded protection money from an illegal city Baccarat school, Bradshaw jumped out of a car, slowly took aim with a long barrelled rifle and shot Neville three times, leaving him to die. 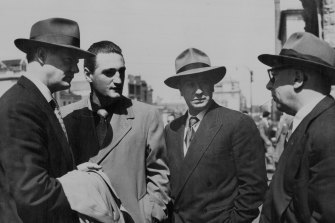 On February 6, 1958, Harrison pulled up at South Wharf in his 1953 Ford Customline to return a borrowed trailer. As he was unhooking the trailer, a man (allegedly Jack Twist) produced a shotgun and said, “This is yours, Fred,” shooting Harrison in the head. A dozen potential witnesses declared they were in the toilet at the time. It was a two-man toilet.

The murder was never solved.

Bradshaw lasted a few more years before he died in the most mysterious circumstances.

In 1961, he was on a light plane with four others when the pilot attempting a stunt loop over Mornington lost control and plunged into the bay. There were no survivors, and while no cause was established it is part of underworld folklore that someone with a grudge tinkered with the plane’s carburettor so when the plane was upside-down it would be starved of fuel. In those circumstances gangsters hate gravity. 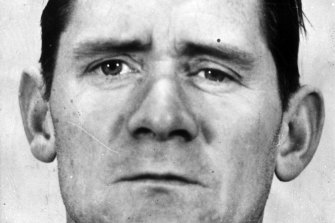 Ronald Ryan, the last person to be executed in Australia. He was hanged in January 1967 at Pentridge Prison, Melbourne.

10) Ronald Ryan and Peter Walker were criminal journeymen until their December 1965 escape from Pentridge Prison when Ryan shot dead prison officer George Hodson as the warder tried to grab Walker outside the jail. During their 19 days on the run Walker shot and killed tow truck driver Arthur Henderson in a beachside public toilet.

Ryan was convicted and hanged for the murder of Hodson. Walker was convicted of manslaughter for Henderson and served 19 years before being released. For 17 years he kept out of trouble before being arrested over a 100 plant hydroponic cannabis plantation.

He died early this year fighting a deportation order to send him to England, the country he left at the age of eight.