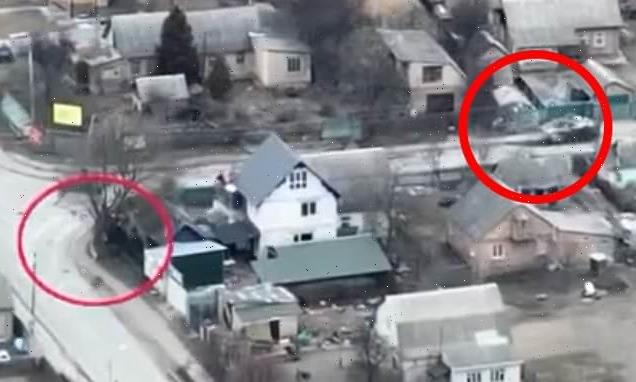 The moment Russian tanks appeared to open fire on a cyclist in the town of Bucha was captured on video by a drone, in potentially more damning evidence of war crimes carried out by Vladimir Putin’s forces in Ukraine.

Footage of the attack in the Kyiv Oblast town shows a man walking his bicycle up a street, unaware that several Russian tanks lie in wait around the corner.

Another video purportedly showed the aftermath of the attack after Bucha was reclaimed from Moscow’s clutches in recent days. In it, a person believed to be the same man can be seen dead on the side of the road next to his bicycle.

In the first video, captured on March 3, the drone appears to be watching the Russian tank column, but the footage also tracks the man as he is walking up the road that runs through a neighbourhood of destroyed or damaged buildings.

The operator of the drone repeatedly pans upwards, showing a long queue of military vehicles – including tanks, armoured personnel carriers and trucks – positioned between buildings, on the next street over from the man. 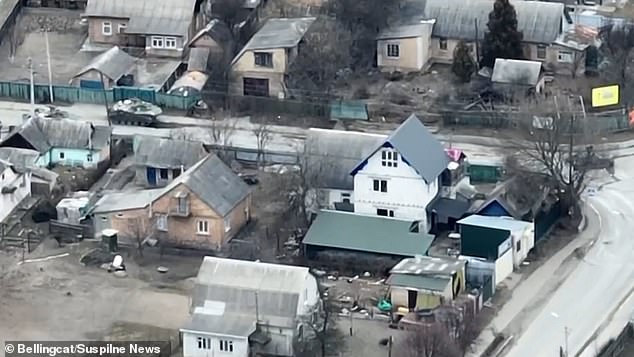 Pictured: A Russian military vehicle (top-left) is seen in drone footage positioned on a road moments after a cyclist turned the corner into the street. The vehicle opened fire

As the cyclist continues down the street – first on his bicycle and then on foot, pushing it along side him – the drone focuses more on his movement up the road.

He is shown nearing a junction in the road and turns left down a narrower street, where an armoured vehicle and a tank are positioned around 150 feet away.

As soon as he turns the corner into the side road, a flash is seen from the armoured vehicle’s turret, and a rocket is shown flying through the air.

The video shows the armoured vehicle opening fire, letting off several more shots in the direction of where the man entered the side road.

After several blasts, the camera zooms in, and a larger flash is also seen when the tank – positioned parallel to the armoured vehicle – also fires in the man’s direction.

By this point in the video, the view of the man has been obstructed by a tree and some fencing after he turned the corner.

However, another video taken on the street – shared by investigative agency Bellingcat and captured some time later – reportedly showed the same junction after the attack. A man, said to be the same as in the first video, can be seen dead – slumped on the side of the road with his bicycle. 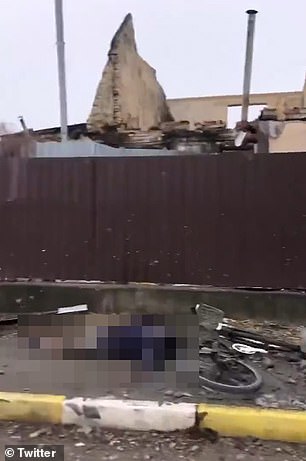 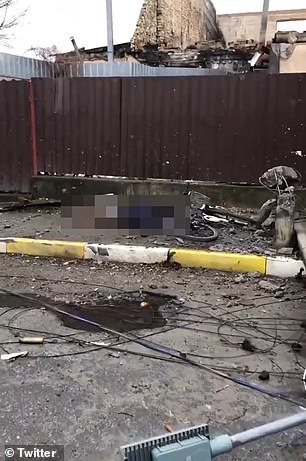 Pictured: Still grabs from a video purportedly showing the aftermath of the attack on the cyclist in Bucha

On his approach, the cyclist appeared to slow down before reaching the junction. It is not clear if he knew where the Russian vehicles were positioned as he turned the corner. The Russian vehicle fired on him almost immediately.

In recent days, Ukraine’s forces have re-entered Bucha and other towns in the surrounding area after pushing Russia’s forces back, away from the capital of Kyiv.

In the days since, a horrific picture of death and destruction has begun to emerge from the town. But while images and videos have largely shown the aftermath of the Russian occupation – with bodies strewn throughout the town – this drone footage appears to be one of the few videos showing Russian forces actively attacking Ukrainian civilians.

Release of the footage came after satellite images of Bucha showed bodies lining the streets more than two weeks ago – debunking Russian claims that the massacre was staged by Kyiv in order to frame its troops for war crimes.

The images taken of Bucha on March 19 show dark objects strewn along a road – which match the exact positions where the rotting corpses of civilians were found by Ukrainian soldiers who recaptured the area from Russian forces at the weekend.

Russian forces were in control of the city at the time, strongly suggesting that it was Putin’s men – and not Kyiv’s – who carried out the killings. 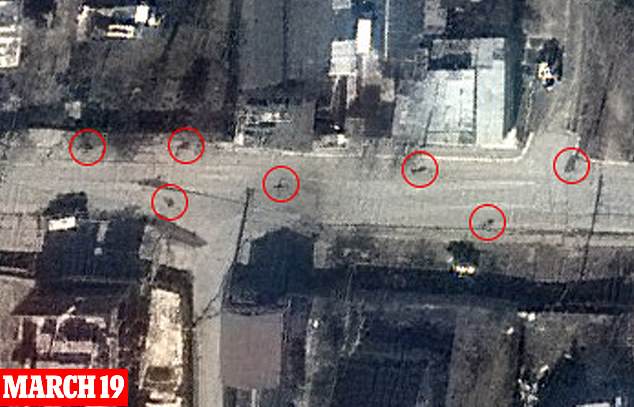 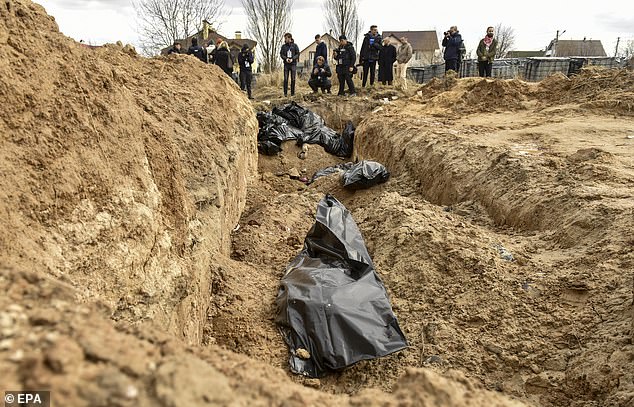 Pictured: Bodies of civilians lay in a mass grave in Bucha which was recaptured by the Ukrainian army last week 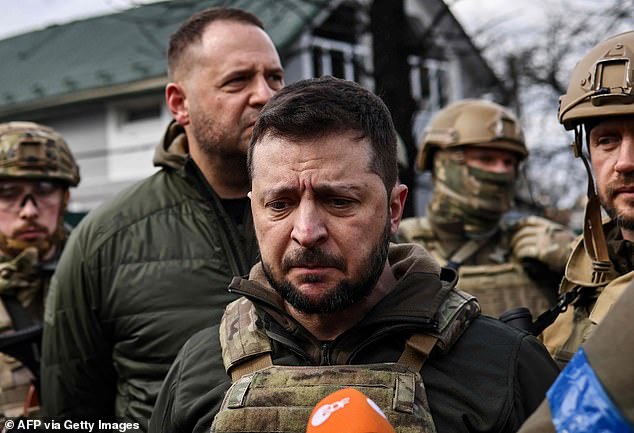 Broken: A visibly emotional President Volodymyr Zelensky yesterday stood motionless as he surveyed the scene of utter devastation he encountered in the town of Bucha, with dozens of bodies shot at close range laying on the empty streets 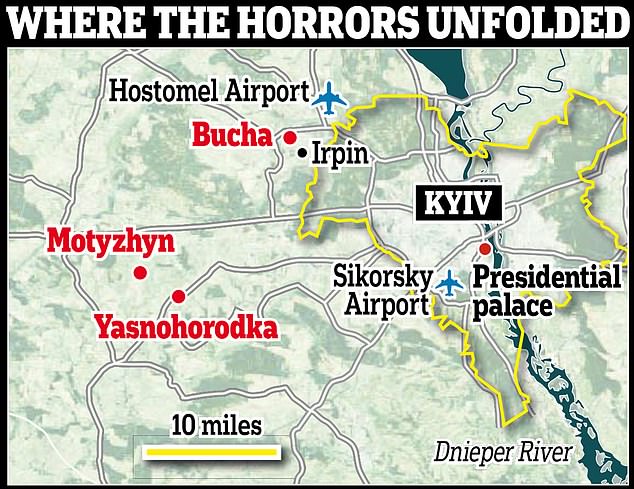 Kyiv now says at least 410 civilians were massacred in and around Bucha by the Russians while others were tortured and raped in what President Volodymyr Zelensky has described as ‘genocide’.

Russia’s UN ambassador, Vassily Nebenzia, insisted at a news conference that during the time that Bucha was under Russian control ‘not a single local person has suffered from any violent action’.

But the satellite imagery from commercial provider Maxar Technologies, first reported by The New York Times, proved the bodies had been there for weeks.

Western and Ukrainian leaders have accused Russia of war crimes before, and the International Criminal Court’s prosecutor has already opened an investigation. But the latest reports ratcheted up the condemnation.

Zelensky, who appeared shattered on a visit to the area yesterday, will today address the UN Security Council where he is expected to push world leaders to impose tougher sanctions on Russia over the atrocities, send more weapons for his armed forces, and for a war crimes probe to punish the Russian commanders responsible.

In a nightly address to the Ukrainian nation on Tuesday, he said that Western sanctions on Russia ‘must finally be powerful’ – adding: ‘Did hundreds of our people have to die in agony for some European leaders to finally understand that the Russian state deserves the most severe pressure?’

He was also critical of the amount of military aid sent to Ukraine so-far, saying more equipment could have helped save civilian lives. ‘I do not blame you – I blame only the Russian military,’ he said. ‘But you could have helped.’

Ukraine’s allies have called the killings in Bucha war crimes, with the EU offering to send investigators to gather evidence. ‘(Russian President Vladimir Putin) is a war criminal,’ US President Biden told reporters at the White House. ‘What’s happening to Bucha is outrageous and everyone’s seen it.’

The White House said it would announce fresh sanctions on Moscow ‘this week’ with France suggesting new measures could target Russian oil and coal exports. But Germany warned it was too soon to cut off Russian gas.

‘We have to cut all economic relationship to Russia, but at the moment, it’s not possible to cut the gas supplies. We need some time,’ German Finance Minister Christian Lindner said.

Elsewhere, the United States and Britain said they would seek Russia’s suspension from the UN Human Rights Council – a move Moscow branded ‘unbelievable’.

Russia has cynically asked for the Security Council to convene to discuss what it describes as Ukrainian attempts to stage a massacre in order to frame its troops, but Britain – which currently chairs the council – has refused. 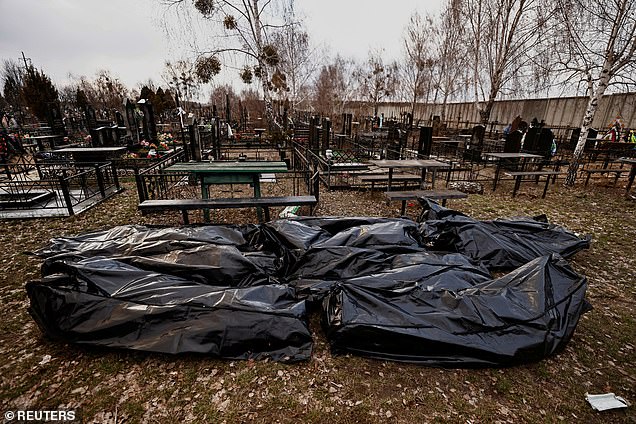 Pictured: Bags containing bodies of civilians, who according to residents was killed by Russian soldiers in Bucha, Ukraine 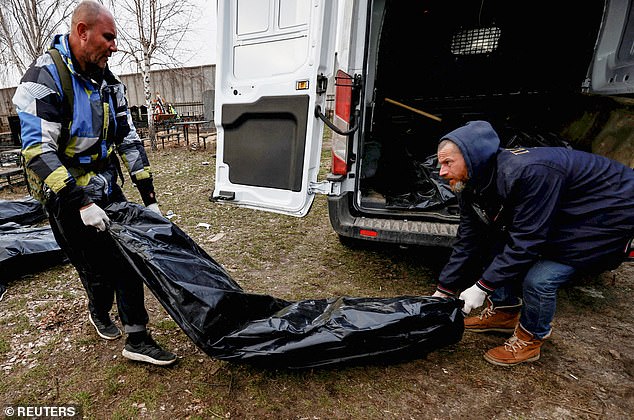 Volunteers unload bags containing bodies of civilians, who according to residents were killed by Russian army soldiers 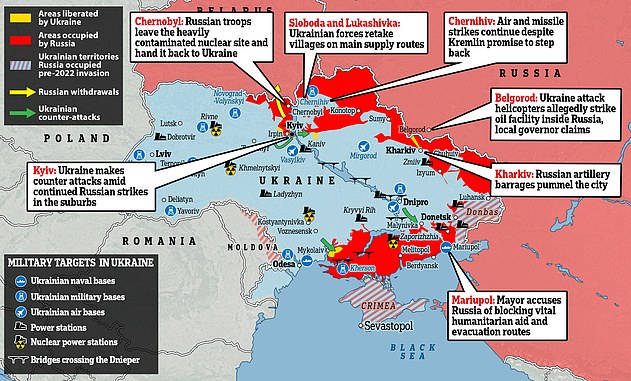 The full nature of the killings in Bucha and other areas from which Russian troops have withdrawn is still being pieced together.

On Monday, the bodies of five men were found in a children’s sanatorium basement in Bucha. The Ukrainian prosecutor general’s office said they were unarmed civilians, who had been bound, beaten and killed by Russian troops.

And in Motyzhyn, west of Kyiv, Ukrainian police showed AFP journalists the bodies of five civilians with their hands tied, including those of the village’s mayor, her husband and son.

Ukrainian officials say over 400 civilian bodies have been recovered from the Kyiv region, many of whom have been laid to rest in mass graves.

But Zelensky has warned that the deaths in Bucha could be only the tip of the iceberg, saying he had information even more people had been killed in places like nearby Borodianka.

AFP reporters who briefly visited the area saw no bodies in the streets, but locals reported many deaths.

‘I know five civilians were killed,’ said 58-year-old Rafik Azimov. ‘But we don’t know how many more are left in the basements of the ruined buildings after the bombardments.’

‘I buried six people,’ another resident, Volodymyr Nahornyi, said. ‘More people are under the ruins.’

The Russian withdrawal from Kyiv has been seen as a pivot to a renewed offensive in the country’s east and south, where Moscow wants to consolidate territory around occupied Crimea and the separatist statelets of Donetsk and Lugansk.

The Ukrainian government has warned Moscow is preparing a ‘full-scale’ attack in the country’s east and regional officials urged civilians to evacuate Lugansk fearing a major Russian attack.

The Pentagon estimates Russia has withdrawn about two thirds of the troops it had around Kyiv and will redeploy them to the east and south, with the White House warning the war’s ‘next phase could be measured in months or longer.’

Even where troops have withdrawn, fears remain, with Kyiv mayor Vitali Klitschko telling residents to wait before returning, citing the danger of continued shelling and the danger of unexploded munitions.