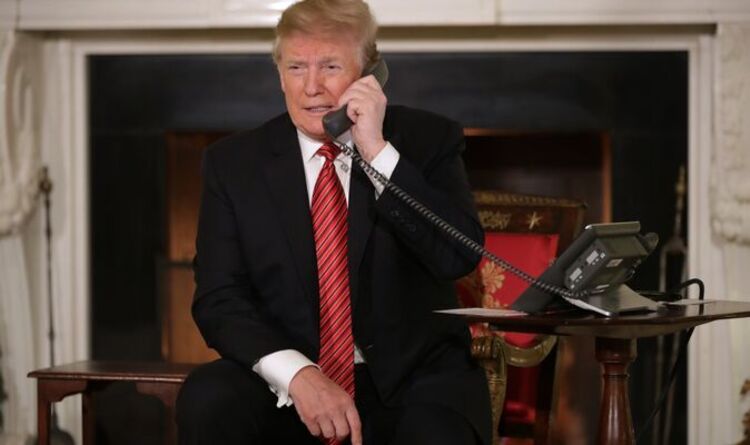 A bipartisan congressional committee conducting an investigation into the riot in Washington fought a legal battle in order to obtain the 45th President’s records. The call logs appear to show Mr Trump made contact with at least eight individuals in the morning, including his ex-White House advisor Steve Bannon and former New York Mayor Rudy Giuliani.

It also found the 45th President called 11 people in the evening.

However, according to the Washington Post and CBS News, the call logs do not record any contact between 11.17am and 6.54pm (local time).

Mr Trump greeted supporters in Washington for a ‘Stop the Steal’ rally at midday in which he said: “I know that everyone here will soon be marching over to the Capitol building to peacefully and patriotically make your voices heard.”

The 45th President concluded his speech, at a time when a crowd assembled outside the Capitol, by saying: “We fight.

“So let’s walk down Pennsylvania Avenue.”

Despite not recording calls, Mr Trump continued to use his now-suspended Twitter account to communicate with supporters.

After publishing disparaging tweets about his running-mate Mike Pence, the ex-POTUS urged protesters to “remain peaceful” before releasing a video at 4.17pm telling the mob to go home.

Over 700 people have subsequently been arrested following the incident.

Five people were killed in the riot, including a police officer.

The phone log gap also comes despite accounts from several Republicans, including House Minority leader Kevin McCarthy, which suggests the former President made contact with GOP officials by phone during the afternoon.

The record appears to even omit a conversation between Mr Trump and Mr Pence in which the 48th Vice President and ex-Indiana Governor refused to buckle to demands to delay the certification of Joe Biden’s victory.

There are growing concerns this could indicate records have been withheld or destroyed.

However, it has also been suggested the President could have been communicating through unofficial channels, including ‘burner’ phones.

In a statement on Monday night, the ex-POTUS said: “I have no idea what a burner phone is, to the best of my knowledge I have never even heard the term.”

A Trump spokesperson added the 45th President had nothing to do with the records and had assumed any and all of his phone calls were recorded and preserved, CBS has revealed.

Mr Trump has also recently issued two statements on his website which continue to peddle the unfounded claim the 2020 Presidential Election was rigged.

In the first, the 45th President said: “So the Radical Left Democrats in Congress and the Unselect Committee continue to seek the destruction of lives of very good people, but have no interest in going after the criminals and thugs who cheated like mad dogs on the 2020 Presidential Election.

“All the evidence is in and conclusive, but they, and the Fake News Media, refuse to look at or report it.

“They call it the Big Lie, but the Big Lie is the exact opposite—they are the liars, they are the cheaters, and they are the ones who are destroying our Country at the Voting Booths, the Borders, the Gas Stations, with our Military, our Vets, Foreign Relations, and everywhere else!”

In the second, Trump added: “So, let’s get this straight.

“The Democrats commit massive and overwhelming voter fraud in the 2020 Presidential Election, and they want the Republicans to go to jail for investigating and protesting a very crooked Election?

“Republicans must get tough (and smart!) and not let them get away with the Crime of the Century!”

However, federal judge David Carter ruled last week Mr Trump had “more likely than not” committed crimes as he tried to overturn the election result.