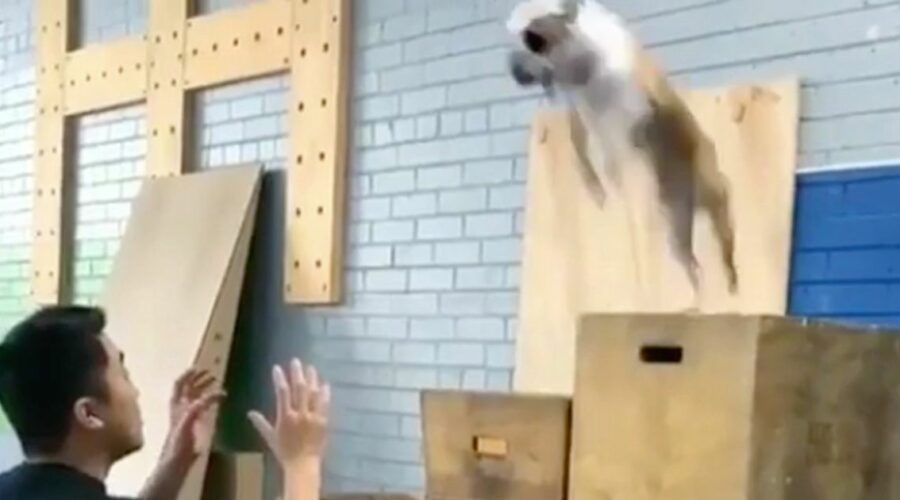 A jumping bulldog has become a social media sensation for celebrating a brave leap into his owner's arms.

Little Reginald has yet again stolen the hearts of dog lovers on Reddit thanks not only to his soaring dive but also his reaction to it.

Proud owner Duc Vo from Canberra, Australia has built Reggie a huge 68,000 strong following on Instagram where his pooch can be seen pulling off heroic stunts inside a gym.

A Reddit user described Reggie's giddy preparation to the jump off a 6ft tall stack of boxes, as "charging".

Another laughed: "Just gotta squat down to charge it up my dude."

Once he "works up the courage" for the leap, Reggie hilariously clears the camera frame with all the form of an Olympic diver, into Duc's open arms.

Someone commented: "Yeah, once he worked up the courage to finally jump he really committed to it."

An impressed viewer praised: "Such a graceful chonk!"

What has really warmed hearts however is how incredibly proud Reggie is of his mighty achievement.

Once caught, the mini bulldog can be seen waving his head and wriggling his body with adrenaline.

The video was uploaded to Reddit's r/aww community by u/tomaltenk with the caption: "The pup's excitement after the jump is adorable".

"This clip has identical energy to the dirty dancing lift," someone exclaimed.

A Reddit user was quick to offer a possible insight into little Reggie's thought process as he embarked on the leap.

More of Reggie's bold jumps at the gym, off tree stumps and other obstacles, can be seen on @reggie_the_mini_bulldog.