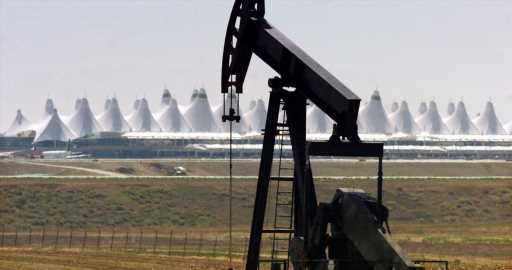 City leaders aim to make Denver International Airport “one of the greenest airports in the world,” but dozens of oil and gas wells that dot its sprawling landscape stand as clear contradictions of that goal.

Now DIA says it will permanently plug those 64 remaining wells, which have been idle since 2018, within three years as part of its new environmental sustainability plan. An airport spokeswoman says a bid request will go out soon to hire a contractor that can plug all of the wells by late 2023 or early 2024.

Most of those wells were operating long before DIA was built in the 1990s on 54 square acres annexed from neighboring Adams County. But over the years, the airport allowed the use of fracking to develop new wells.

The side hustle brought in $7 million in 2010, helping in a small way to subsidize DIA’s main operations. But declining gas and natural gas prices reduced that take significantly in more recent years, with the wells generating just $2.3 million in 2017.

The next year, the city auditor questioned the economics of extraction since the wells are expensive to maintain and operate.

Since DIA hit pause on the wells in May 2018, in part due to environmental concerns, airport leaders and Denver Mayor Michael Hancock’s administration have been cool to the idea of restarting them — though they have hesitated at times to foreclose the option. Hancock has since announced larger initiatives to address climate change, and he’s faced pressure from City Council members and environmentalists.

Now it’s official: DIA is getting out of oil and gas for good.

“Our five-year (sustainability) plan focuses on a variety of new efforts that supplement the work we are already doing, support Mayor Hancock’s climate action agenda and continue to improve environmental performance across all aspects of our operations,” said Phillip Washington, who took over as airport CEO in July, in a recent news release.

Ean Thomas Tafoya, the state director of the environmental group GreenLatinos, is among those who have pushed to ban fracking in Denver — which functionally meant fracking at DIA, the only place it occurred in the city. The most recent campaign aimed to get a city charter amendment on the ballot in 2020, but it was sidelined by the pandemic.

“We need to do away with fracking because we know it’s contributing to the climate crisis in a huge way,” he said.

DIA isn’t the only airport that’s allowed oil or gas extraction on its property. Several have dabbled with it, including Dallas-Fort Worth International Airport. Among DIA’s past oil customers was Suncor, which has a refinery in Adams County and supplies jet fuel back to the airport.

The council earlier this year approved $4 million in multi-year contracts to maintain its wells and seal off a couple each year. Airport spokeswoman Stephanie Figueroa said accelerated plugging under the new plan will begin after DIA runs a contracting process.

Its goal is to begin in April, with all wells plugged within 18 months to two years after that.

Still unclear is exactly how much the new program will cost. In 2019, Councilwoman Amanda Sawyer said DIA had estimated the cost of full-scale plugging at $9 million. At the time, she was floating the idea of requiring approval from voters for any drilling or extraction to occur within the city.

“The airport needs to focus on running the business of being an airport,” Sawyer said Friday, praising DIA’s decision to deactivate its wells permanently. “I think Denver should be a leader in sustainability practices, and closing those wells is a great step forward.”

27/09/2021 World News Comments Off on DIA plans to plug all oil and gas wells, focus on sustainability
Markets