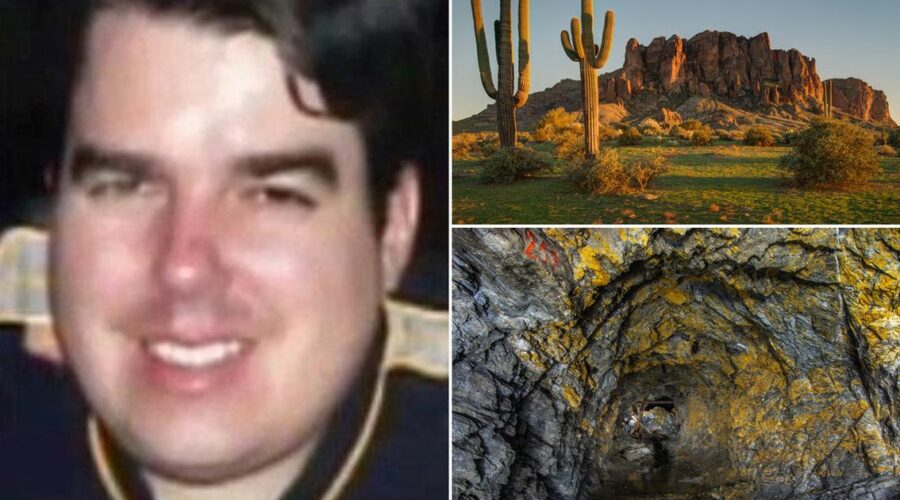 Bellhop Jesse Capen, 35, was obsessed with the legend of the Lost Dutchman's Gold Mine.

He spent much of his spare time reading about it and searching for it.

One day he travelled to the fabled site of the mother lode, Superstition Mountains near Phoenix, Arizona, and never came back.

Three years later his body was discovered in a crevice, 35ft up a cliff.

Soon after three more "gold crazy" men went looking for the loot. They disappeared too.

Police called off the search after 19 days knowing it would have been impossible for them to survive in the blistering summer heat. Their bodies were found six months later.

With rugged steep cliffs, countless canyons which mean if you lose your way you are probably doomed fatally hot summers, and killingly cold winters, the Superstition Mountains are a potential death trap.

Over more than a century, so many people have died searching for gold in the area that the authorities have now banned people from trying. It is illegal to mine, and any gold found belongs to the state.

But it hasn't stopped people looking, and dying.

The story begins more than 150 years ago.

Depending on which version you believe, in 1850 the Peraltas Mexican mining family stumbled across a mine packed with gold but were massacred by Apache Native Americans.

Years later a man called Dr. Thorne treated a wounded Apache chief and was rewarded by being blindfolded, taken to the mine and given as much gold as he could carry.

In another version, German miners found the mine but were again attacked. One man escaped and on his deathbed drew a rough map of where it was located.

Such stories could easily be dismissed as campfire tales but for a couple of facts.

In 1891, German immigrant Jacob Waltz, nicknamed “the Dutchman,” lay on his deathbed.

He told friends he had discovered the mine. Under his bed was a candle box containing some extraordinary rich gold ore.

Normally if a mine produces two and half ounces of gold per tonne of rock it's considered a bonanza. This ore suggested the rock had 50 ounces per tonne. He drew a map of where it could be found.

Fast forward to 1931. Treasure Hunter Adolph Ruth had been given some maps by a descendant of the Peraltas family and went looking for the mine.

He disappeared and six months later his body was found with two bullet holes in his skull. With the body was a note saying he had found the mine with details of where it was located, but the map was missing. The note ended with the triumphant phrase Veni, Vidi, vici (I came, I saw, I conquered).

A hiker literally tripped over a sharp piece of rock and found four buried flat stones. On these were carved instructions in Mexican and a crude map.

The clues included details of where a trail starts, descriptions of canyon walls and two maps with 18 marked places to follow to the gold. They were dated 1847, just a year before the Peraltas family met their end.

Ever since the legend of the lost mine has fascinated tens of thousands of people with books and TV series being made about the mystery.

The trouble is the terrain is so rugged, and dangerous, even searching the area is deadly – without the dangers of other gold fever infected miners.

George Johnston, who first tried to find the treasure in the 1950s and went onto work at the Superstition Mountain — Lost Dutchman Museum up until his death in 2017, aged 97, told Cowboys and Indians magazine: "Folks had claims all over those mountains and would commonly fire warning shots to scare trespassers — or even now and then murder those they thought were seeking the Dutchman’s gold. Nobody went in unarmed."

More recently someone found a note in a bottle floating in the Salt River. The writer claimed he was in the Superstition Mountains and had found the Dutchman’s mine, but was trapped and needed help. He gave rough directions but search parties could not locate him.

Was this another hoax, or are the bleached bones of another gold hunter laying in the mountains like so many others?

It is yet another mystery of the Superstition Mountains.