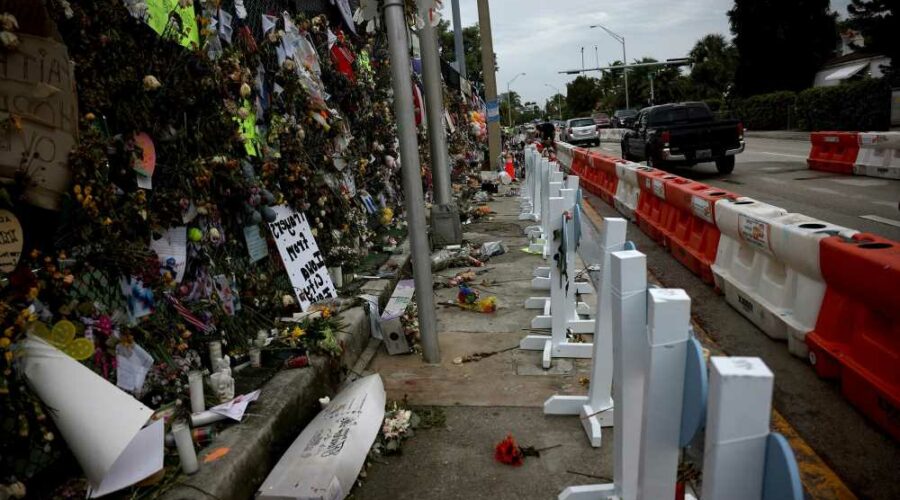 Death toll from Florida condo collapse up to 94

Miami courthouse shut down over ‘safety concerns’ after condo collapse

The number of confirmed dead in last month’s collapse of a Florida condo building reached 95 on Tuesday, after one more body was pulled from the rubble overnight.

Officials said 14 people remain unaccounted for in the ruins of Champlain Tower South in Surfside, which collapsed on June 24.

Miami-Dade Mayor Daniella Levine Cava said 85 of the victims have been identified.

“Our teams have continued the search and recovery as we work as hard as ever on the collapse to recover remains and to bring closure to the families who are still waiting,” Levine Cava said at a briefing Tuesday.

“We’ve now moved over 18 million pounds of concrete and debris and 892 trucks have come through the site to transport the debris,” she said.

Levine Cava said heavy rains have posed challenges for the first responders, with municipal workers called on to pump water from portions of the ruins.

She said the number of people unaccounted for continues to fluctuate, as detectives continue to fact-check the list of victims and remove duplicated names.

Hundreds of first responders have been sifting through the rubble for 20 days on around-the-clock shifts that have only occasionally been halted by foul weather.

No survivors have been found since the day of the collapse, officials said.

The work was initially classified as a search-and-rescue mission to locate survivors. But after more than two weeks, officials reclassified it as a recovery effort — a search for the bodies of those buried in the deadly collapse.

Officials have begun to discuss the future of the site, and Levine Cava said there is a push to preserve at least part of the site as a memorial for the dozens killed there.

However, Surfside Mayor Charles Burkett said some of the survivors of the collapse have expressed an interest in rebuilding the tower on at least part of the site.

“Some of the families also want to go back and live there again,” Burkett said. “They want the building rebuilt on a portion of the site. They acknowledge that a percentage of that site is a holy site, as I’ve said before. But they haven’t given up on their home.

“And I think that this is something that we will also be looking at because obviously, our job here is to make the families whole,” he said. “Our job is to put them back in a place where they can restart their lives.”