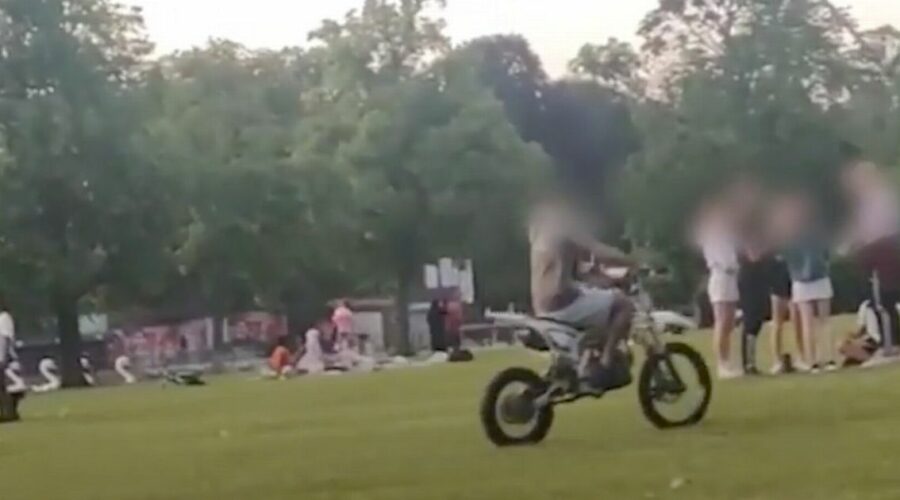 A group of men brazenly drove an off-road motorbike through a public park full of children, as seen in a shocking video.

In the clip, filmed by an angry witness on Wednesday, June 16, the motorbike roars along the grass where families are sunbathing, playing, and having picnics during the heatwave.

The rider is wearing a brown tank top and white shorts as he hurtles across the green space and past a group of people and someone lounging on a blanket.

Another person then rides the bike back along the stretch of grass.

The 30-year-old witness, who was visiting Edgbaston's Cannon Hill Park with his girlfriend, told BirminghamLive the biker was riding "at speed" and was a danger to the other people there.

He told the title: "I went there for a nice relaxing night with my girlfriend after a busy day at work.

"I couldn't believe it when I saw this bike being ridden so fast through the park."

He added: "There were families there with young children playing."

The man, who wanted to remain anonymous, said it happened at around 8pm and although some of the park-goers tried to stand up to the troublemakers, they continued to ride the bikes through the park.

He said: "A group of young people said something to them, questioning why there were riding in a park packed with people, but they just gave them abuse and rode off.

"There were about five men and they were all taking part riding the bike."

On its website, West Midlands Police said people riding off-road bikes were breaking the law and acknowledged it was an issue in the area.

The force said: "It is illegal to ride any motorbike in public open spaces such as parks, play areas, and on pavements.

"We regularly receive complaints concerning the anti-social and dangerous use of off-road motorbikes."

It is not clear if the incident was reported to the police.