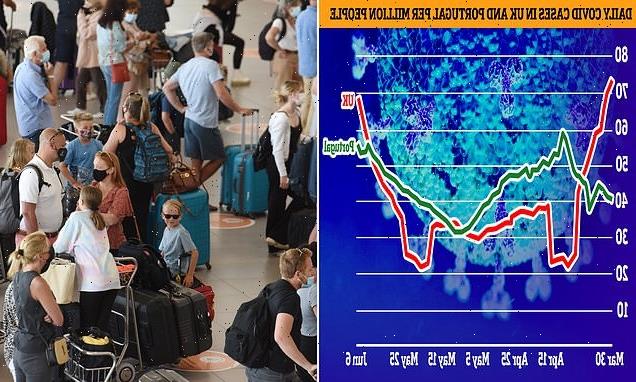 Holidaymakers returning from Portugal had a Covid test positivity rate of 1.5% – three times higher than England’s

Holidaymakers may be more likely to test positive for coronavirus after returning from Portugal than if they stayed home in the UK, early traveller data suggest.

Ministers last week stripped the country of its green list status amid concerns that cases were rising there.

Portugal’s positive test rate has almost doubled from 37 cases per million people on May 17 when Britain reopened international travel to 56 per million on June 6, but remains lower than the UK’s, which is around 69 per million.

And Government figures show three out of 200 Brits tested positive in May after returning to the UK from Portugal, making up 1.5 per cent of all those who got tested.

In the UK, the positivity rate of swab tests is just 0.5 per cent, according to Public Health England’s weekly report, suggesting the risk is threefold for those who have travelled abroad.

It is impossible in many cases to be sure where somebody caught the virus and the holidaymakers may have got ill in the UK before leaving, after coming back or while mixing with other passengers in an airport.

Dozens of football fans were last week forced to self-isolate when returning home from the Chelsea vs Manchester City Champions League final in Porto, Portugal, after reportedly coming into contact with a positive case.

International travel for Brits remains difficult with quarantine required on return from almost all destinations, costly tests required before departing either end and many countries refusing to permit entry for people from the UK. 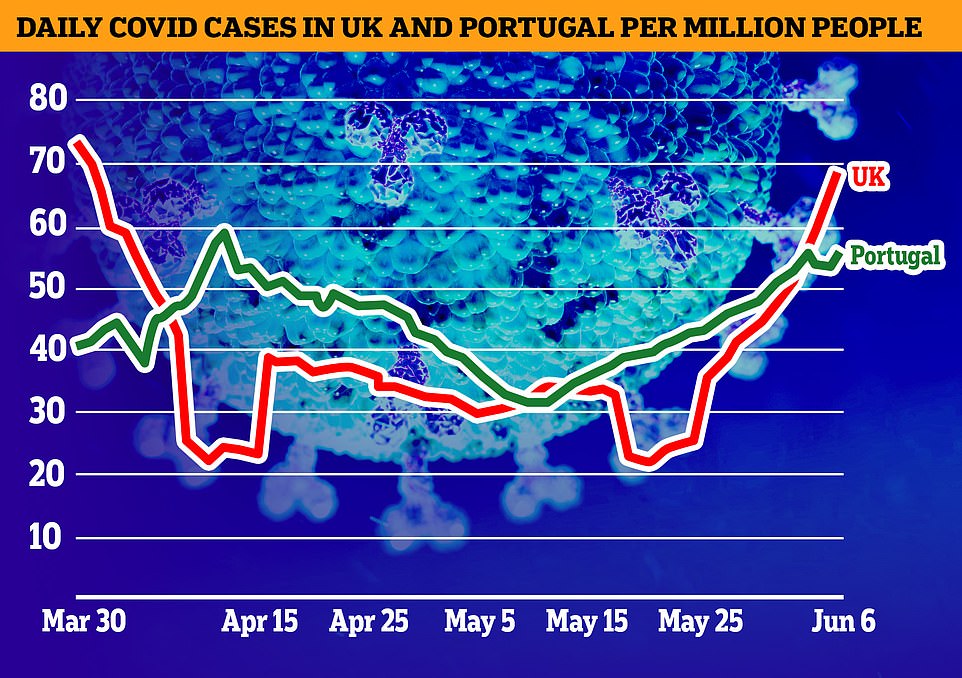 Portugal’s positive test rate began increasing just days before people from the UK were allowed to travel there, and has risen by 75 per cent from a 10-month low three weeks ago. It remains lower than Britain’s, which has tripled since mid-May 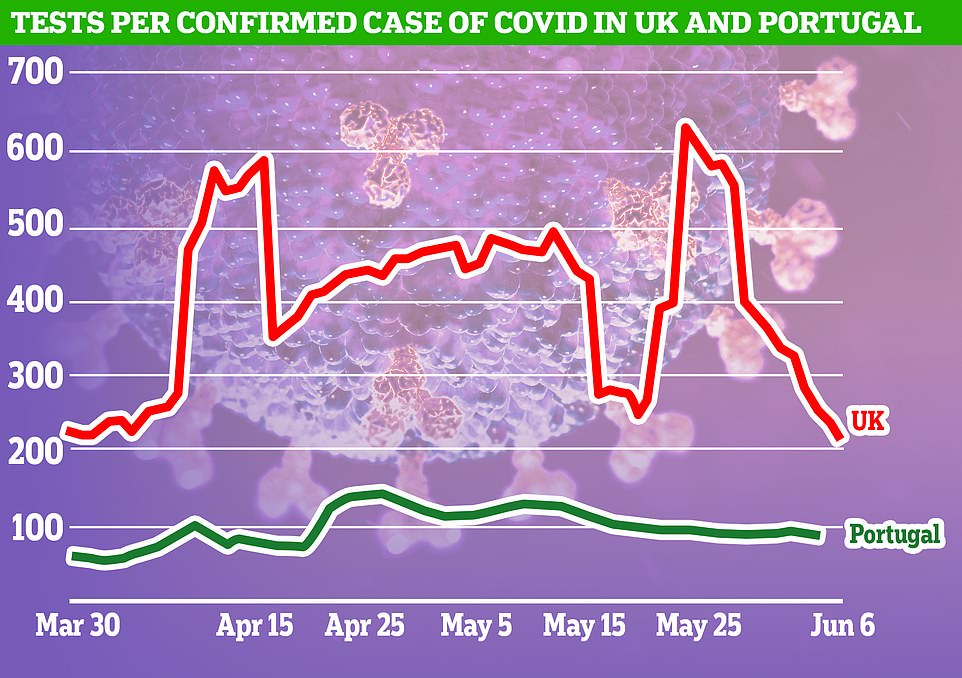 The number of tests need to find one case of coronavirus has plummeted in the UK in recent weeks, showing the virus is likely becoming more widespread as the number of tests has remained constant. The test positivity in Portugal has stayed steady 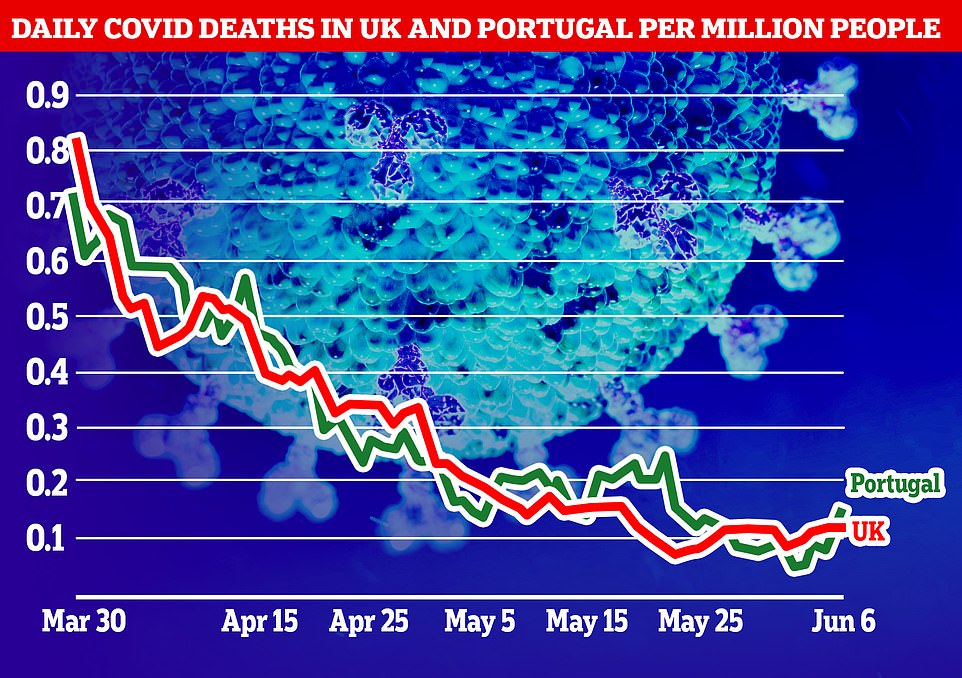 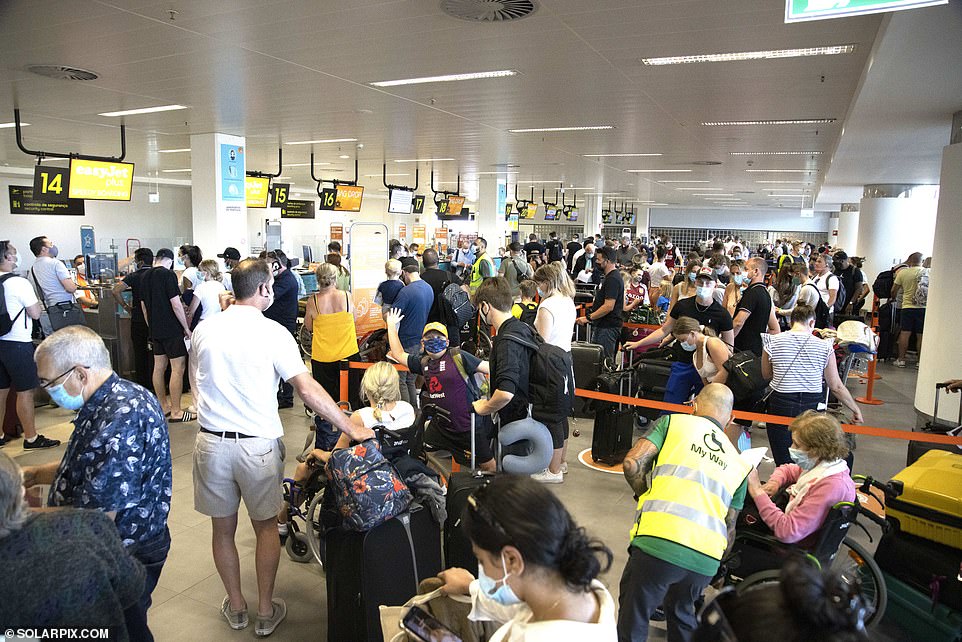 The UK’s no-quarantine rule for people coming home from Portugal ends tomorrow and thousands of holidaymakers have been scrambling to get back in time.

Hundreds of Manchester City and Chelsea fans who travelled to Portugal and back for the Champions League final were ordered to self-isolate for 10 days when they returned.

Supporters took to fan message boards to reveal they were contacted and told to self-isolate through the app, while others said they received an email or phone call. Fans began reporting the messages from yesterday evening – three days after landing back in the UK.

It is unclear how many supporters have tested positive so far and the source of a potential outbreak has yet to be identified. It is thought likely people had it before they flew to Portugal because of how quickly others were told to self-isolate.

A Chelsea spokesman said: ‘We are aware of reports and advise anyone contacted to follow the advice from NHS Test and Trace and Government guidelines.’

Photos from the weekend showed fans coming together both before and after the final, with very little social distancing as they crammed into squares and near bars, with Chelsea fans celebrating wildly after their team triumphed.

Portugal’s government has kept bars and night clubs closed and still recommend people working from home but the country has now lost its place on the UK’s ‘green list’.

Anyone arriving later than 4am on Tuesday will have to spend 10 days in self-isolation at home when the country officially moves down to the ‘amber list’.

Until today it had been one of the only viable holiday destinations in the world for Brits, with governments on both side permitting free travel with only testing needed.

Some on the UK’s green list won’t let people in – Australia and New Zealand, for example – and others are remote islands unfit for holidays, such as Ascension Island and the Falklands.

The driving force behind Portugal being removed from the green list was the increasing rate of infection in the country.

Its positive test rate began increasing just days before people from the UK were allowed to travel there, and has risen by 75 per cent from a 10-month low three weeks ago.

In Britain, meanwhile, the positive test rate has tripled in about the same time.

Department of Health figures showed that three out of 200 Portugal-to-UK travellers tested between May 6 and May 19 got positive results.

The rate of 1.5 per cent was three times higher than the average 0.5 per cent positive rate for members of the public taking tests at home in the UK.

It does not prove, however, that travellers caught the virus while they were in Portugal.

Anybody who goes abroad for longer than three days must get a Covid test on their way home and then test again on the second and eighth days after getting back to Britain.

If the day two or eight tests are positive the traveller would be counted in the official data for holidaymakers but it is just as likely that they contracted the virus in an airport, while travelling home or by breaking isolation rules in the UK.

If someone had been infected while on holiday they would have to pass Covid screening before coming home, meaning they would have to have caught it only a day or two before the test or between taking the swab and leaving. There is only a brief window after picking up the virus before someone tests positive.

The positive samples were sent for genomic sequencing for detecting mutant variants, but it is not clear if any were found.

The figures were compiled by the Joint Biosecurity Centre for the Government. JBC data is used by ministers to decide whether countries should be ranked green, amber or red under the Covid traffic light travel system.

The Government downgraded Portugal on Thursday, citing a near doubling of the country’s infection rate and the discovery of the Nepal virus mutation.

The travel industry reacted with fury to the JBC data last night, saying it was proof of the very low risk posed by people arriving from Portugal. It insisted the country should have stayed green.

A leading epidemiologist said he did not understand the Government’s thinking. Professor Tim Spector, of King’s College London, said: ‘If you travel from London to Manchester at the moment, it’s a much greater risk than going to Portugal, Spain, Italy, France.

‘Are we protecting the Portuguese from problems? Is it that way around? Because, otherwise, I don’t really get it.’

He told Times Radio: ‘We can’t stop variants coming into this country unless we completely lock down the country.

‘I think we just ought to start settling down and dealing with our own outbreaks and not try to have this haphazard travel policy which is causing a lot of fear and confusion.’

Mr Hancock is said to have been the driving force behind ministers’ decision to ignore JBC advice that Malta and a list of other islands should be added to the green list.

He is also said to have rejected the idea that Portugal should be put on a ‘watchlist’ rather than immediately turned amber.

The watchlist option acts as an early warning sign, designed to give people more time to return home before a country goes fully amber if the Covid data gets worse.

Mr Hancock was said to have been backed by Cabinet Office minister Michael Gove and the Home Office. They also opposed Malta being added to the green list. One Whitehall source claimed Mr Hancock and Mr Shapps had a ‘massive barney’. 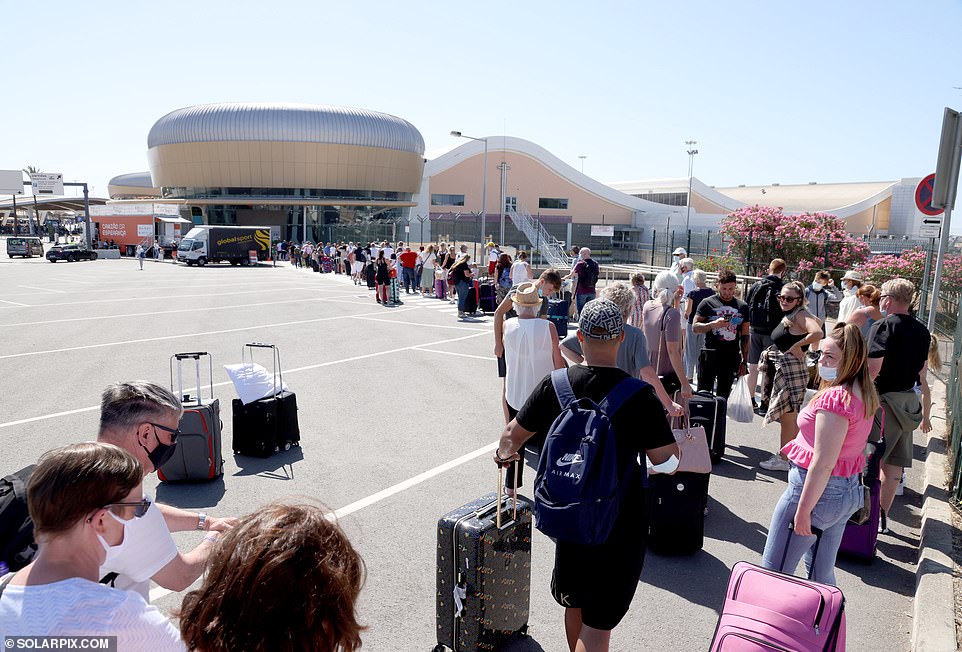 Tim Alderslade, of Airlines UK, said last night: ‘We essentially have a pretend traffic light system. They have ignored their own recommendations and led an entire industry down the garden path. It’s clear that many in Government don’t want international travel this summer. They should have the decency to tell us so we and our passengers can plan accordingly.’

Portugal’s downgrading triggered chaos as holidaymakers scrambled to dash home to beat ten-day quarantine rules which kick in at 4am tomorrow. People with bookings to Portugal face the choice of rescheduling for later in the year in the hope it goes green again or seeking refunds.

Seven countries were added to the red list, but no new ones went green. It means that, of the 11 destinations left on the green list, Gibraltar and Iceland are the only ones Britons can realistically visit. Quarantine-free travel is only possible to green countries.

They are also the only ones where ministers say people should go on holiday. The list is reviewed every three weeks, with the next due on June 28.

A Government spokesman said last night: ‘We have taken a cautious approach to our green travel list to protect the country and our vaccination campaign from the threat of Covid-19 variants.’

Race to escape the misery of quarantine

From Gerard Couzens at Faro Airport

Frantic Britons queued for hours in baking heat yesterday as they tried to beat the clock to get out of Portugal.

Hundreds who turned up at Faro airport for rescheduled flights had to line up outside the terminal in 25C (77F) heat.

The wait was even longer for those scrambling to get Covid tests without which they could not get on their planes.

Those who fail to return home by 4am tomorrow will have to quarantine for ten days after Portugal was unexpectedly moved off the ‘green list’ last week. 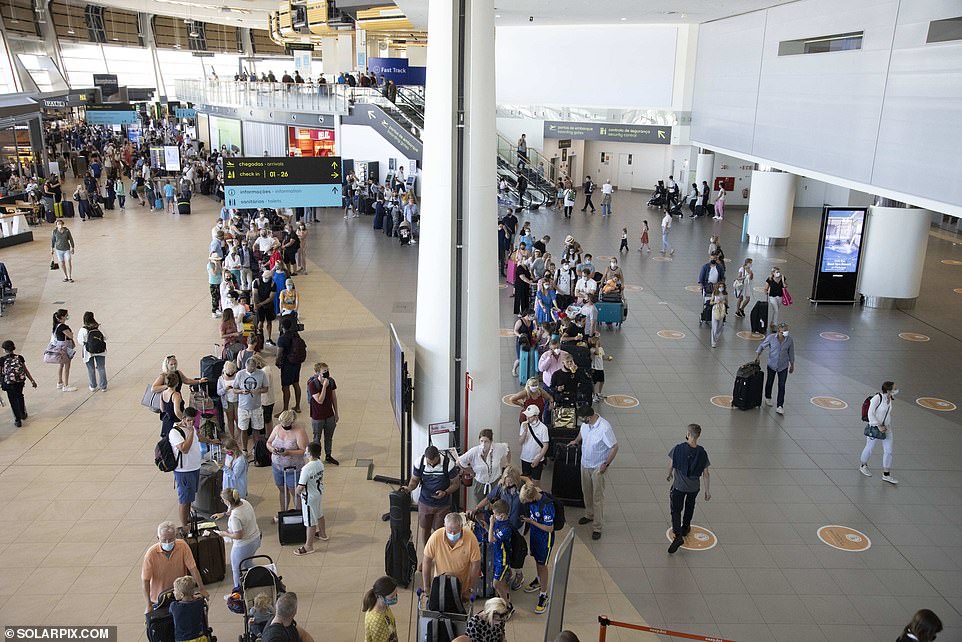 This prompted many to cut short their holiday – some almost immediately after arriving – to go back home.

Algarve tourism bosses mobilised a lorry to beef up airport Covid testing after travellers were turned away from centres near their resorts.

Many decided to come to the airport a day before their pre-quarantine flights home to make sure they got test results. They took no chances after several holidaymakers missed their flights home at the weekend after failing to get their negative results back in time.

Katherine Hitchen, 30, from Hindhead, Surrey, travelling home with dad Michael and daughter Ivy, three, said: ‘We touched down on Thursday to texts saying Portugal had been put on the amber list. We were planning to stay for a week but are going back on Monday now to avoid quarantine.

‘It’s been a stressful few days since we arrived. 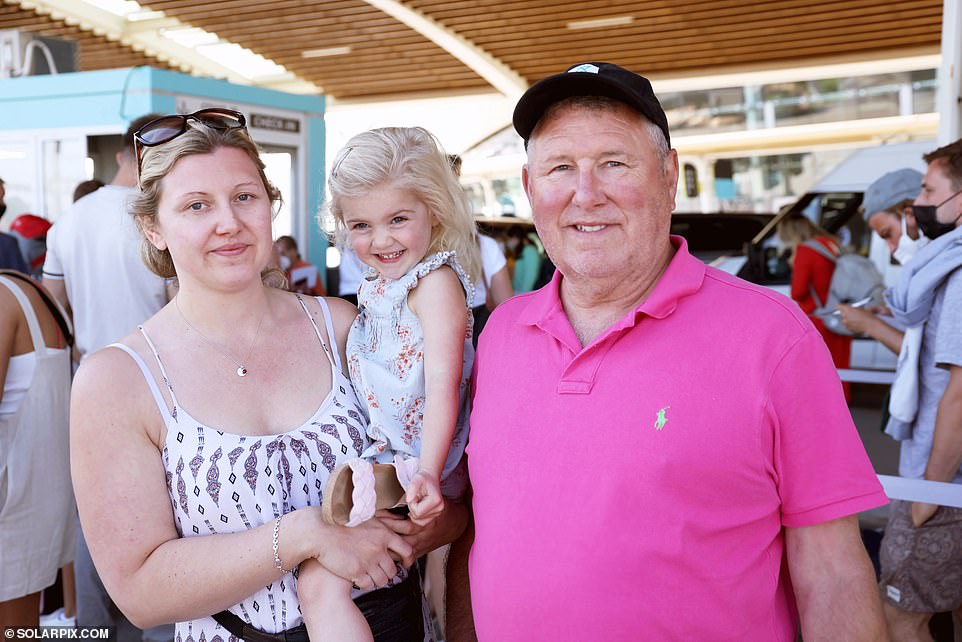 Katherine Hitchen with her dad Michael and daughter Ivy, three

‘I’d like to be sitting round the pool right now, not waiting to have a swab stuck up my nose.’

Louise Cooper, 55, from High Peak in Derbyshire turned up to be tested at Faro airport yesterday eight hours before her flight home. She said: ‘We got here on Monday morning and spent the first three days trying to sort out the tests for our flight home.

‘It’s been a nightmare. Everywhere was fully booked. The only place we were offered was a drive-thru in Faro which was about an hour away from where we’ve been staying in Praia da Luz. Being a drive-thru, we were told we needed a car – which we don’t have.’ Michael Nyhan, 70, who arrived on Thursday for a week’s break in Praia da Rocha with wife Angela, 67, said: ‘We’re going back today instead. We can’t face being cooped up inside again after the lockdown we’ve already been through.

‘We hadn’t even checked into our hotel room when we found out Portugal was going amber.