The measure, which Democrats see as inadequate, is likely to fail.

The number of deaths worldwide from the coronavirus has now surpassed 900,000, according to a New York Times database. 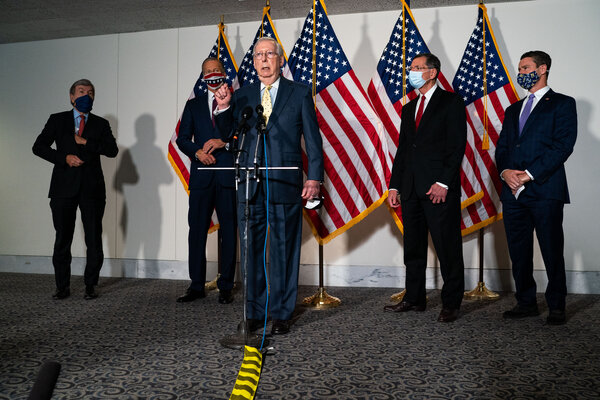 Senate Republicans are pushing ahead with their ‘skinny’ stimulus bill.

Senate Republicans plan to force a vote Thursday on their substantially scaled-back stimulus plan, in a maneuver all but guaranteed to fail amid opposition by Democrats who call the measure inadequate.

After months of struggling to overcome deep internal divisions over the scope of another relief measure, Republicans hope to present a near-united front in support of their latest plan. They can then try to blame the continuing impasse on Democrats, who are expected to oppose it en masse, denying it the 60 votes it would need to advance.

The package, which Republicans refer to as their “skinny” bill, includes federal aid for unemployed workers, small businesses, schools and vaccine development.

“I’m optimistic that we’ll have a good vote on our side,” Senator Mitch McConnell of Kentucky, the majority leader, said on Wednesday. “I would hope this might appeal to some of the Democrats.”

But Democrats, who have refused to accept any proposal less than $2.2 trillion, argue that the legislation does little to address the economic devastation of the pandemic.

The measure does not include another round of stimulus checks for American taxpayers or aid to state and local governments, omissions that cut down the overall price tag of the legislation. And while it would resume weekly federal jobless benefits that lapsed at the end of July, it would set them at $300 — half the original amount. Democrats are pressing to reinstitute the full payment.

“Instead of improving their offer, Senate Republicans have made it stingier and even less appropriate to the looming crisis that we have,” said Senator Chuck Schumer of New York, the minority leader. “I’m not sure what kind of negotiating strategy that is, but it sure isn’t serious strategy, and it sure won’t be successful.”

Treasury Secretary Steven Mnuchin, who has been a point man in negotiations with Democrats on a recovery package, cast doubt Wednesday on whether any agreement could be reached, saying he was not sure whether there was still a chance.

“We’ll see,” Mr. Mnuchin said. “I hope there is. It’s important to a lot of people out there.”

More than 900,000 people worldwide have now died from the virus.

The global death toll from the coronavirus has surpassed 900,000, according to a New York Times database, and sickened at least 27.8 million people as of Thursday morning.

Seven months into the pandemic, the virus has been detected in almost every country.

The true death toll may be higher; The New York Times has found underestimates in the official death tallies in the United States and in more than a dozen other countries. The United States has the highest number of cases and deaths, followed by India, which reported more than 95,000 new cases on Thursday, and Brazil.

The pandemic is ebbing in some countries that were hit hard early on, but the number of new cases is growing faster than ever worldwide, with more than 200,000 reported each day on average. Cases are worryingly high in the India, the United States and Israel. In Brazil, cases are high but appear to be decreasing.