A 58-year-old college president in Georgia died of Covid-19. One member of Prime Minister Benjamin Netanyahu’s cabinet resigned from Israel’s government over a nationwide lockdown that coincides with key holidays.

Britain reported more than 3,000 new daily cases for the third day in a row, more than doubling its seven-day average since the beginning of the month. 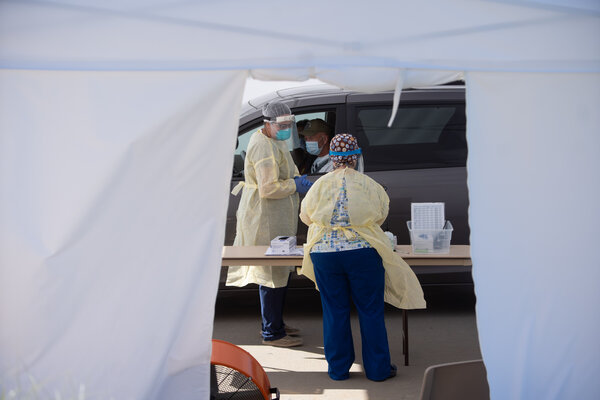 A record surge in new cases has hit the Midwest.

As coronavirus cases fall in most parts of the country, they are on the rise in the Midwest, prompting alarm in places that had until now avoided the worst of the pandemic.

“Our community is experiencing its first sustained, significant surge of illness since this terrible pandemic began,” said Joe Parisi, the county executive in Dane County, Wis., which includes Madison. “We will have some incredibly difficult and sad weeks ahead if we don’t rally together now and stop this deeply disturbing trend.”

Through Friday, North Dakota, South Dakota, Missouri and Iowa had added more recent cases per capita than all other states.

Case numbers are not the only sign of trouble. Testing positivity rates, which measure the percent of positive findings among all people tested, are high across much of the Great Plains, a sign of uncontrolled spread and insufficient monitoring.

The rise of infection in the Midwest is different from what Brooklyn experienced in March or South Texas in July. So far, hospitalizations have not spiked. Morgues have not been overrun. Lockdowns have not been ordered.

Young adults, who often have milder cases of the virus, are helping to drive the current surge. Thousands of infections have been linked to Midwestern universities, some of which have struggled to enforce social distancing rules.

“We knew this was coming,” said Mayor Brandon Bochenski of Grand Forks, N.D., where more than 600 infections — or roughly one of every 24 cases in the state — have been linked to the University of North Dakota. “If we could control college students,” Mr. Bochenski added, “we would have figured that out about 200 years ago. We did the best we could.”

Many cases across several states have also been linked to a motorcycle rally in Sturgis, S.D., which attracted thousands of people from around the country. Hundreds of people were infected at a jail in Wichita, Kan. And in parts of rural Iowa and North Dakota, case numbers have risen with no obvious link to a college.

Since the beginning of the pandemic, the practice of checking for fever in public spaces has become increasingly common, causing a surge in sales of infrared contact-free thermometers and body temperature scanners — even as scientific evidence indicating that they are of little value has solidified.

Gatekeepers with thermometer guns have appeared at the entrances of U.S. hospitals, office buildings and manufacturing plants to screen out people with fevers who may carry the virus. And Gov. Andrew M. Cuomo of New York last week called for checking patrons’ temperatures as one of several ground rules for resuming indoor dining in restaurants.

But while health officials have endorsed masks and social distancing as effective measures for curbing the spread of the virus, some experts scoff at fever checks. They say that taking temperatures at entry points is a gesture that is unlikely to screen out many infected people and offers little more than an illusion of safety.

The C.D.C. defines a fever as a temperature of 100.4 degrees Fahrenheit or higher. But some reports have questioned the accuracy of thermometer guns, and while temperature checks may identify people who are seriously ill, those people are unlikely to be socializing much or going out for meals. A growing body of evidence also suggests that many of those who are driving transmission are silent carriers — people who have been infected but feel fine and don’t have a fever or other symptoms.

Last week, the Centers for Disease Control and Prevention — which in May told employers to consider checking workers daily for symptoms like fever, but appeared to reverse itself in July — said it would stop requiring airport health screenings beginning Sept. 14 for international passengers from countries like Brazil, China and Iran because the checks do not identify silent carriers.

Temperature checks are akin to “getting the oil checked before you go on a long car trip,” said Dr. David Thomas, an infectious disease specialist at Johns Hopkins University School of Medicine. “It makes you feel better, but it’s not going to keep you from wrecking the car or prevent the tires from falling off.”

“It’s something you can do, and it makes you feel like you’re doing something,” he said. “But it won’t catch most people who are spreading Covid.”

Bitcoin is a better gold than gold itself, Tyler Winklevoss says