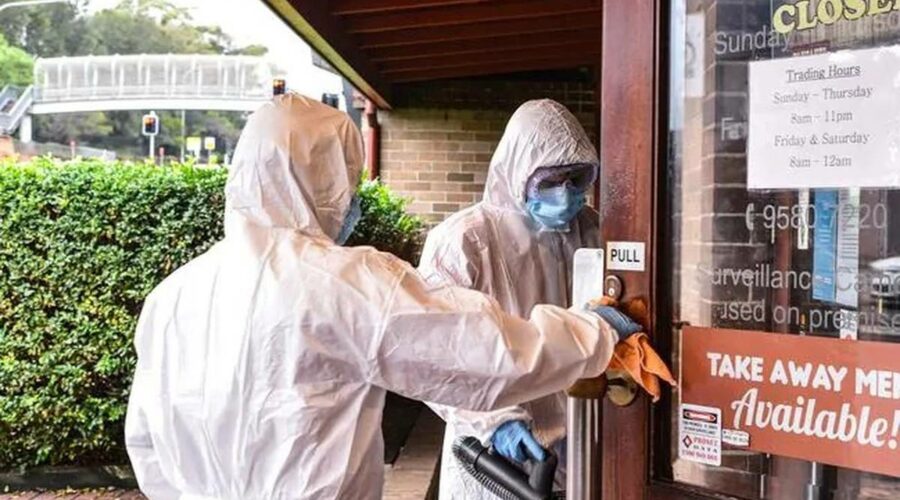 In Queensland, hundreds of people have been contacted as a quarantine hotel went into lockdown after two residents tested positive with investigations under way to see if there was any transmission.

Both cases were already known and recorded by Queensland Health but it was only discovered on Sunday that one of them could have “potentially” caught it from the other while in hotel quarantine.

They were both staying at the Hotel Grand Chancellor in Brisbane, which will go into a 72-hour lockdown while authorities investigate if Covid-19 spread between them while they were staying at the hotel rather than them both separately catching it overseas and bringing it in.

One of the cases was a patient at Brisbane’s Princess Alexandria Hospital, who was treated by a doctor who later tested positive to Covid-19, deputy chief health officer Sonya Bennett said on Sunday.

Contact tracing of more than 200 of the doctor’s community contacts from four venues she visited on Thursday is under way. There were 61 staff and seven patients at the hospital who were identified as potential close contacts of the doctor who tested positive.

“Most reassuringly, her three close contacts or associates, friends and colleagues, who were with her most of that time at the venues have tested negative,” Queensland deputy chief health officer Sonya Bennett said, according to the ABC.

“That’s not to say that they’re completely out of the woods – we’ll continue to monitor them while in quarantine and we also expect to get test results back from those community contacts in the next few days.”

The patient was staying on the same floor of the Hotel Grand Chancellor while in quarantine as another case, and authorities will investigate if there could have been transmission between the two while the hotel is in lockdown.

In New South Wales, the number of Covid-19 exposure sites visited by an infected security guard in Sydney has grown to include a Coles, 7-Eleven and a coffee shop.

As well as a Pancakes on the Rocks restaurant and a pool, he also visited a Korean restaurant, a 7-Eleven, a Coles, and made five visits to a Hudson’s Coffee before receiving a positive test result on Saturday night.

Urgent contact tracing is under way after NSW Health revealed the state’s first positive case in 55 days was confirmed as a 47-year-old man who works as a security guard at two Covid-19 hotels for returned travellers.

The man does shift work at the Sofitel Wentworth in Sydney’s CBD and the Mantra hotel at Haymarket. He also has a fulltime job in an office.

As a result of the NSW scare, Tasmania, Victoria and Western Australia have issued travel alerts in response to the new coronavirus case in NSW.

On Sunday NSW lost its 55-day streak without any coronavirus cases after a Sydney hotel quarantine worker tested positive to Covid-19.

Western Australia’s Department of Health has now issued health advice for travellers who recently returned to Perth from New South Wales following the detection, including the need to quarantine if they visited specific venues.

Meanwhile Victoria Health confirmed it will be contacting all arrivals into the state who entered via Sydney using data captured by the Travel Permit System.

Tasmania Health officials also issued a swift response to the virus case, calling on anyone in the state who has been at any of these locations specified by NSW Health at the dates and times listed to self-isolate immediately and phone the Tasmanian Public Health Hotline.