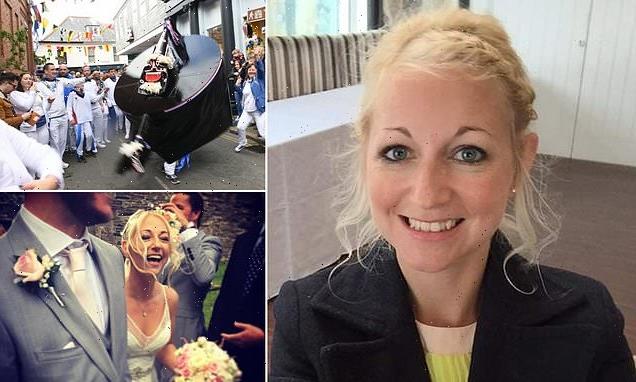 Coroner hits out at Padstow’s traditional May Day parade and says it ‘must be professionally managed’ following the death of mother-of-two who was struck by a wooden horse costume, inquest hears

Padstow’s traditional May Day parade ‘must be professionally managed’ following the death of a mother-of-two who was struck by a wooden horse costume, a coroner has today told an inquest.

Laura Smallwood, 34, died in hospital three days after she was struck in the back of the head by the wooden framed horse – known as an ‘Obby ‘Oss’ – an inquest heard.

The incident took place during the 2019 May Day parade in the north Cornwall town, which has hosted such celebrations since as far back as the 16th Century.

The Obby Oss, meanwhile, is thought to have been used as part of the parade for more than 200 years. Both the parade and the Obby Oss are organised by local committees.

But today coroner Andrew Cox, who is holding an inquest into the death of Mrs Smallwood, said the event, which regularly attracts more than 20,000 people to Padstow’s streets, should be ‘properly managed’.

‘We need to make sure there is proper professional management of the event,’ Mr Cox told the inquest. 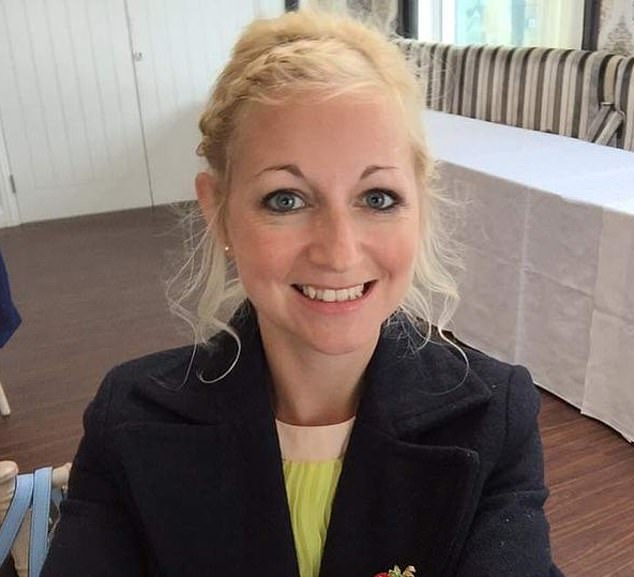 Laura Smallwood (pictured), 34, died in hospital three days after she was struck in the back of the head by the wooden framed horse – known as an ‘Obby ‘Oss’ – an inquest heard 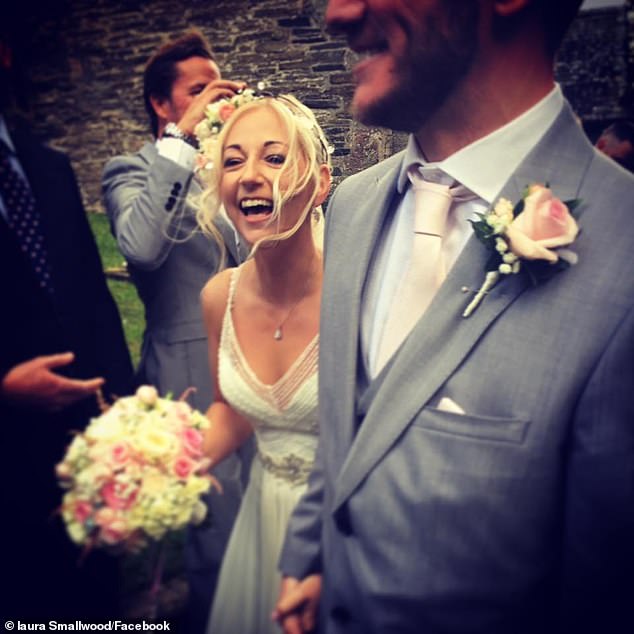 Today coroner Andrew Cox, who is holding an inquest into the death of Mrs Smallwood (pictured), said the event, which regularly attracts more than 20,000 people to Padstow’s streets, should be ‘professionally managed’ 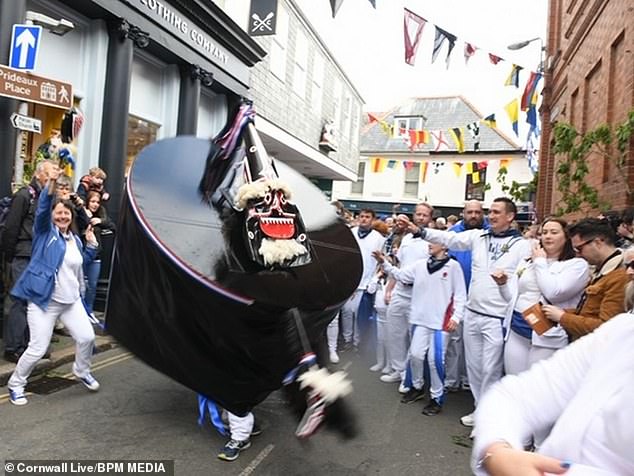 The incident took place during the 2019 May Day parade in the north Cornwall town, which has hosted such celebrations since as far back as the 16th Century. Pictured: An Obby Oss at the Padstow Traditional May Day Festival

‘What we need is someone taking responsibility of the event. These arrangements are not working and we need to do something about it.’

What is the ‘Obby ‘Oss Day celebration?

‘Obby ‘Oss Day is the biggest day in Padstow’s calendar.

Thousands of people cram into the little town to celebrate the festival every May Day.

The origins of the Obby Oss are numerous.

Some say the celebration has its roots in pagan times, others that it’s a rain maker, a fertility symbol, a deterrent to a possible landing by the French some centuries ago or perhaps a welcome to the summer.

Locals spend the night decorating the town’s streets with flags, flowers and greenery complete with a maypole.

The next morning, two ‘osses’, one red and one blue emerge from their stables.

The ‘osses’, swirling and dancing proceed through Padstow’s streets taunted by a Teazer, who leads the dance with theatrical movements.

As the procession moves around the town, dancers perform a traditional gyrating dance to the sound of musicians and drummers.

The inquest heard Mrs Smallwood, a paediatric nurse, was ‘knocked out’ when the Obby Oss struck her as it was paraded through the streets of the town in the annual festival.

Home Office forensic pathologist Dr Amanda Jeffery carried out a post mortem and said she had been told 34-year-old had ‘some direct contact’ with the Obby Oss in the region of her head, neck or shoulder.

The pathologist said that Laura’s cause of death was brain stem stroke caused by a tear to both arteries in the neck.

Coroner Mr Cox heard that Laura may have suffered a ‘minor incident’ around ten days before the Obby Oss collision, which had likely caused some damage to her arteries.

Activities like doing yoga or painting a ceiling can cause such an injury, Mr Cox was told.

The inquest was also told that Mrs Smallwood had earlier intervened in a row between a young couple and suffered a ‘push, slap or wallop’ to the face from a woman .

The hearing was told that scuffle left her with a mark on her face but she had ‘laughed’ it off.

And she also said of the earlier incident: ‘The blow to the face (from the earlier row) could have aggravated the damage that was present.’

She said the final incident with the Obby Oss was the most significant but said she was not dismissing earlier things that happened that day that may have contributed.

Consultant neuropathologist Dr Kathryn Uranker said Mrs Smallwood had suffered a tear around ten days before May Day and it was healing – but the injury had torn again on May Day. 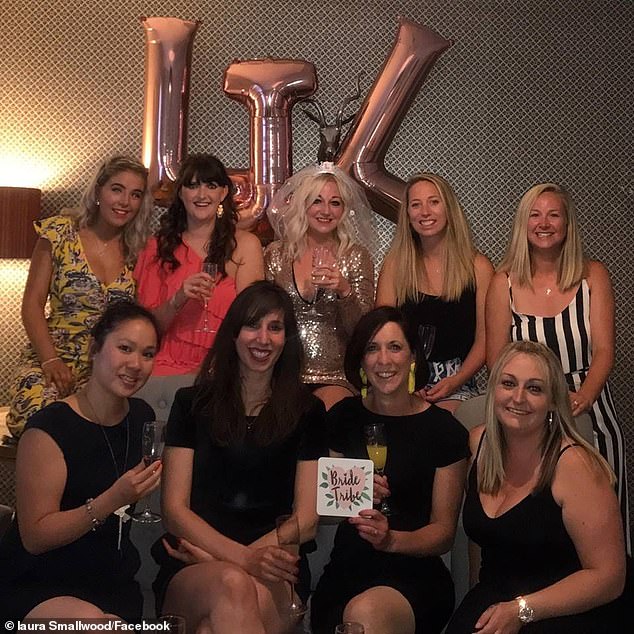 Another witness, Charlotte Stupple, said Ms Smallwood (pictured with her friends) had been laughing about a ‘scuffle’ earlier with a young woman called Chelsea Powell 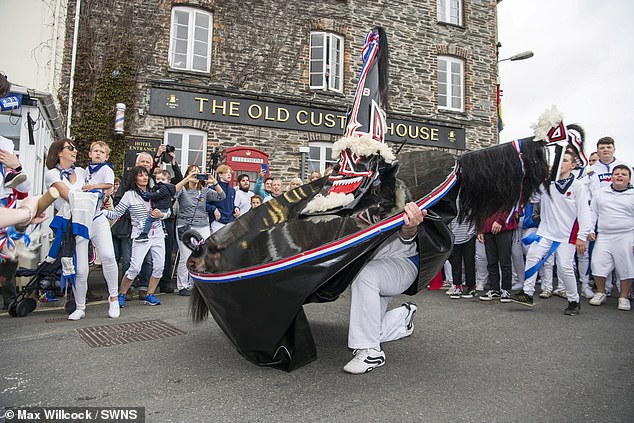 She told the inquest the Obby Oss collision worsened the damage that was there and was her ‘favoured cause of the final deterioration’.

Earlier in the inquest, the coroner told how Mrs Smallwood was standing behind the Obby Oss, which is carried by a person inside the wooden framed costume, when it suddenly moved backwards.

A witness told the inquest they believe Kevin Constance, a 66-year-old who was inside the Obby Oss at the time, had slipped and the wooden structure had struck Mrs Smallwood in the back of the head.

The inquest heard that shortly after, Mrs Smallwood felt dizzy and grabbed a friend’s arm. Her face had begun to droop before she collapsed.

Mr Constance told the coroner: ‘I was not aware of hitting anybody. I could only see forward.’

The hearing was told that up to 20,000 people may attend the May Day parade and it is considered a ‘low risk’ event.

Police sergeant Susan Honeywill told the inquest it would be helpful if there was more legislation in place to ensure safety at this type of event.

The inquest at Cornwall Coroner’s Court continues and is expected to end on Thursday.