Coroner calls for better warning signs after inquest hears brother, 18, and sister, 14, died in tragic accident off Clacton Pier after getting into difficulties in the sea

A coroner has called for better warning signs near the sea after an inquest heard a brother and sister both died in a tragic accident off Clacton Pier when they got into difficulties in the water.

Malika Shamas, 14, and her brother Haider Ali, 18, were on a family trip to the seaside last August when they had to be pulled out of the water.

A female cousin had also been in the water with them but was rescued and survived.

A coroner today said that safety precautions need to be addressed before the Easter holidays, in order to keep children safe, while the mother of the children who died in the tragic accident said warning signs need to be more child-friendly. 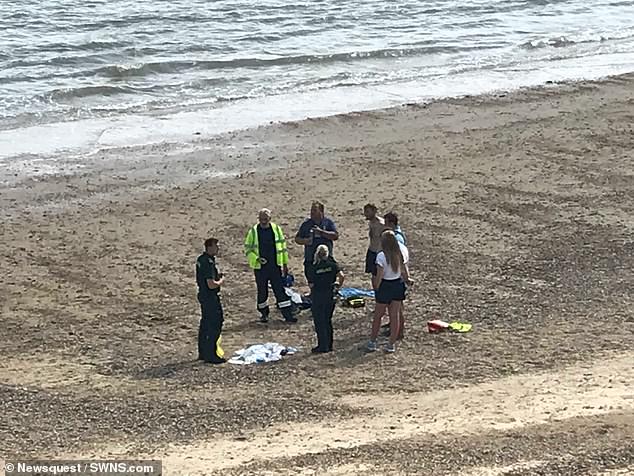 A police car is seen at the scene in Clacton-on-Sea in August last year after Malika Shamas, 14, and her brother Haider Ali, 18, had to be pulled out of the water 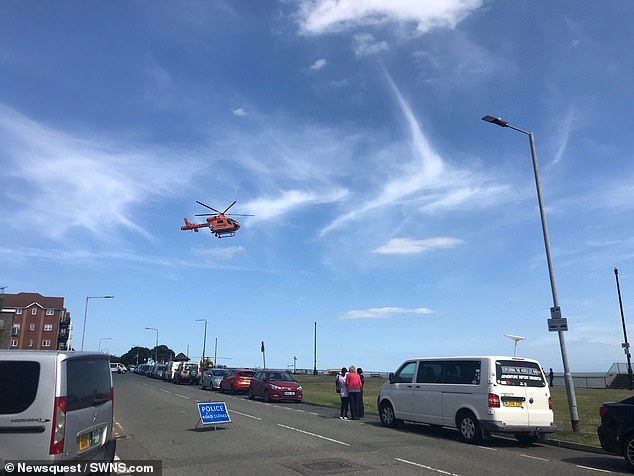 An inquest in Chelmsford heard that Malika, who lived in Luton, died of immersion and her brother died of pneumonia, brain damage and drowning two days later.

Their mother Shagufta Shamas, who could be seen dabbing away tears as the hearing ended, told the coroner: ‘I just want to ensure that safety precautions are in place so that an incident like this does not occur in the future.’

Essex’s senior coroner Caroline Beasley-Murray ruled that the deaths were a result of an accident.

She added that some warning signs could be in a larger print and, after a suggestion from Mrs Shamas, that they should appear in a child-friendly format.

It was also said that the court is ‘very mindful’ that the Easter holidays are fast approaching and that it was ‘most concerned’ that changes be made to safety regulations before then.

The Shamas siblings, who could both swim, and their cousin got into difficulty near Clacton Pier at around 1.40pm on August 8.

They had been playing a game to see how far they could go from shore.

Detective Inspector Craig Wiggins of Essex Police told the inquest that Malika was at a point where she was still able to stand up,. 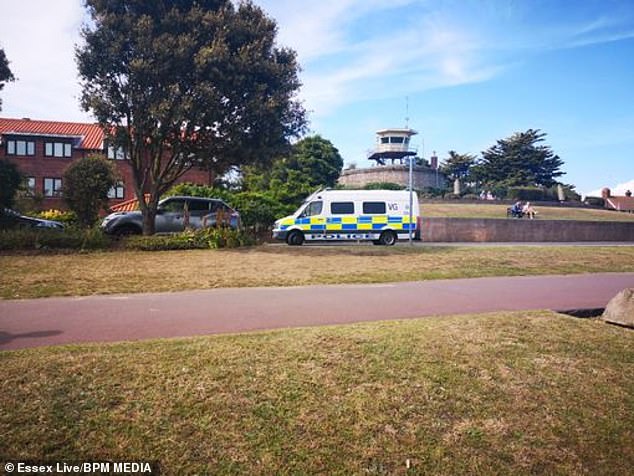 A police van is pictured on the scene last August. Today a coroner warned signs need to be clearer

He said Malika had ‘then panicked’ and her brother and the other children tried to help.

The incident happened little more than a year after 15-year-old Ben Quartermaine drowned near the pier.

The court heard that there was a warning sign on a nearby flood defence which said ‘danger, no bathing due to varying depths of water’ but the coroner noted that you had to be quite close to read it.

The signage was within national standards and there is a flag to show where the beach patrol ends.

The area where the accident happened was just out of range of the nearest beach patrol, which was about 375m away.

Mrs Shamas recalled struggling to keep her balance on the soft sand in the water as tried to help the children.

She also told the court: ‘I also entered the water to try to help some of the children.

‘I was clinging on to this precious life.

‘The sand underneath my feet was giving way and I was trying to reach this little girl. This happened within minutes.

‘Should there not have been signs in this particular area saying that you should not go in and that this is what can occur?’

Speaking directly to Mrs Shamas at the end of the inquest about the deaths of the children, the coroner said: ‘They were clearly very much loved people with bright futures ahead of them.

‘I do hope you will be able to look back on the happy memories you have of them both.

‘Not only have you lost them but you have had the ordeal of being in this inquest.

‘You have displayed the utmost dignity.’

‘Nothing can bring back these teenagers who had their whole lives ahead of them.

‘However we hope that this tragedy will help to raise awareness of the dangers inherent at the coast, particularly with the more difficult to reach inland communities, and to also help to prevent further tragedies.’

He said that efforts to ‘make our coastline as safe as possible’ will include ‘reviewing our signage in line with national guidance’.

The council is hoping to launch some safety awareness promotions within the coming months, including sending safety leaflets to coach firms and having precautionary messages printed on the back of train tickets so they might be seen by holidaymakers who are not local to the area.

Mr Carran also said that the council would ‘do our best to implement recommendations made today by the coroner to further improve safety on our seafront’.