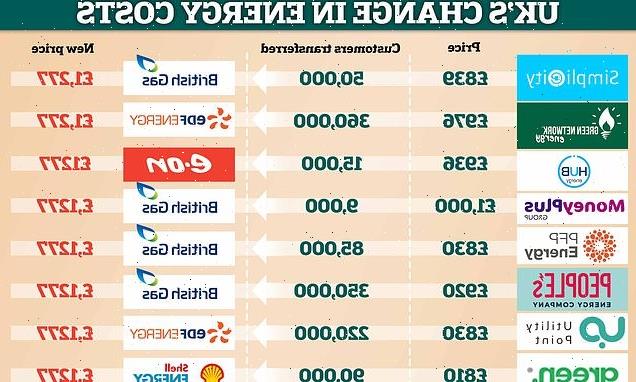 How nearly 1.5million customers of nine collapsed energy firms could face paying up to hundreds of pounds MORE for their electricity and gas bills after being taken on by new providers

Customers of collapsed energy firms who were forced to transfer to new providers are now facing higher prices, it has emerged.

Several firms have gone bust amid surging gas prices, with fears that more could follow in the winter.

The companies left around 1.5 million customers without energy, forcing other firms to step in and take them on.

However, those firms, which include British Gas, E.on and EDF Energy, are charging customers substantially more money over a year.

Under the ‘supplier of last resort’ system, outstanding credit balances owed to existing and former customers will be paid and householders transferred will be protected by the energy price cap.

But customers who were on cheaper fixed price deals, signed before the gas price rise, were warned that bills could jump by hundreds of pounds.

And now, with the annual price cap set to rise to £1,277 from October for a typical household, British Gas and EDF Energy are among the suppliers set to charge customers the top rate.

The companies left around 1.5 million customers without energy, forcing other firms to step in and take them on

Avro was the largest of several companies to go bust this month after the wholesale price of gas soared.

Customers are able to change supplier or tariff without exit fees after the switch-over but may struggle to find equivalent deals.

The Government has shied away from offering energy firms a bailout despite concerns few are strong enough to take on transferred customers.

It comes after a move to less reliable wind and solar power left Britain at the mercy of international gas markets and re-ignited the debate over energy security.

How are suppliers of last resort determined?

When an energy supplier collapses, its customers are transferred to another firm, known as a supplier of last resort.

Under the ‘supplier of last resort’ system, outstanding credit balances owed to existing and former customers will be paid and householders transferred will be protected by the energy price cap.

SOLR are determined through a bidding process, where Ofgem selects the most apporpriate supplier to take in the customers of a collapsed firm.

Several factors are considered when appointing an SOLR.

They include timing and supplier size, which means larger suppliers may have to step in if a collapsed firm has a lot of customers.

Supplier systems are also considered, with those similar to the collapsed one given an advantage.

Customer time is another factor, for example suppliers with business clients may be more able to take on similar customers.

Finally, and this is more dependant on the fallen supplier, Ofgem will need up-to-date information on customers. More information means it’ll be easier to determine which supplier takes over.

On the weekend it emerged ministers are considering a ‘change of focus’ to nuclear as a more reliable green energy source.

The Government has been criticised for not replacing ageing reactors sooner, with the UK to lose more than a fifth of nuclear power generation when two plants are retired next year.

Investec found the current bill for the seven firms that have already gone bust stands at £820million, but this could rocket if more companies follow them as expected this winter.

Energy companies that take on customers from failed rivals are able to reclaim costs, including that of buying more expensive gas and electricity from the wholesale markets to cover the new households.

This is paid from an industry levy that goes on all customers’ bills. As it stands, each household will pay £30 each to rescue customers of firms that have already collapsed.

Analyst Martin Young calculated that the difference between what suppliers can charge new customers under the UK’s energy price cap and the cost of purchasing energy at today’s inflated prices was ‘at least £550’ per customer, the FT reported.

When this is multiplied by the 1.5million orphaned customers it comes to £826million.

But last week Scottish Power chief executive Keith Anderson warned customers could foot a bill running to ‘billions of pounds’ due to the chaos.

Wholesale prices for gas have increased 250% since the start of the year, and 70% since August, meaning these unprotected firms are buying energy for less than they sell it to customers.

Nine firms have now ceased trading this year, with the head of regulator Ofgem warning more are likely to follow leaving ‘well above’ hundreds of thousands of customers in limbo.

Jonathan Brearley declined to give an estimate when in front of MPs on the Business, Energy and Industrial Strategy Select Committee but said: ‘We do expect a large number of customers to be affected, we’ve already seen hundreds of thousands of customers affected, that may well go well above that.’ He warned the crisis may not be temporary.

However, business secretary Kwasi Kwarteng rejected claims that there could be just 10 energy firms left by the end of the year as he repeated his vow that ‘lights won’t go out’.

But ministers have admitted that some families will face a choice between ‘eating and heating’ this winter and dismissed pleas from Britain’s floundering energy providers to scrap the energy cap that protects millions of the poorest households.