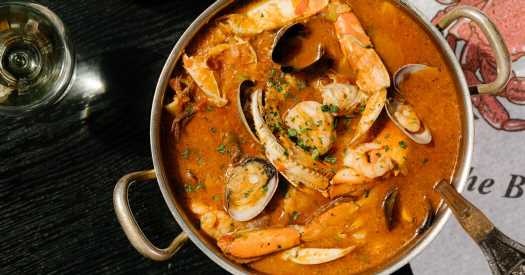 In San Francisco, the hallmark seafood stew can be — and often is — a tired menu item, but our critic finds that the right version still thrills.

The showstopping cioppino at Anchor Oyster Bar in San Francisco.Credit…Jason Henry for The New York Times

SAN FRANCISCO — When Roseann Grimm was growing up, there was always a pot of long-simmered red sauce on the stove. Her grandfather Nicola DeSimone, a fisherman from Amalfi, Italy, used it to start a pan of cioppino, a seafood stew made with crab.

No, her grandfather’s cioppino didn’t involve bottles of Lefty O’Douls Bloody Mary Mix, or the soft, tongue-numbing sweetness of toasted star anise — she made those additions over time, at her restaurant, Anchor Oyster Bar.

Ms. Grimm opened the place in 1977, on Castro Street, and her tiny kitchen still turns a few ladlefuls of housemade marinara into one of the most delicious variations of cioppino I’ve tasted — a vivid, luxurious sauce bobbing with Dungeness crab in the shell, clams, mussels, cod and shrimp, all of it shimmering with roasted garlic butter. 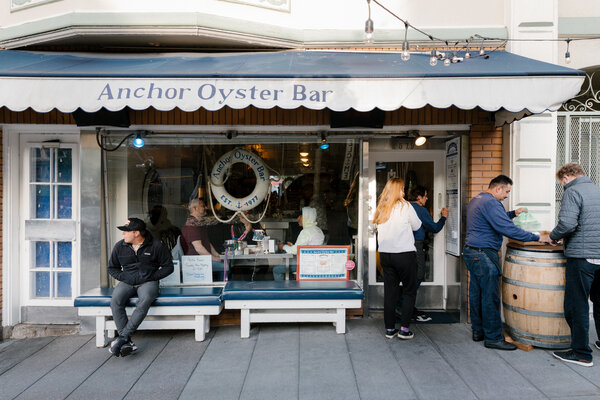 Cioppino is such a classic in San Francisco, it’s practically a cliché. And after eating as many versions as I could, I can report that it’s fumbled at many restaurants, which count on nostalgia rather than flavor to sell it. But when it’s made with care, cioppino is magnificent — so delicious I can’t believe how often, and for how long, it’s been dismissed as tourist bait.

The dish is so charged with seaside kitsch that inside the Ferry Building, Hog Island Oyster Company doesn’t even use the word on the menu. The seafood shines in its cioppino-esque dish — packed with squid and garnished with a fat, head-on shrimp — but it’s called a “rustic seafood stew,” sidestepping the connotations entirely.

When the food journalist Elizabeth Riely wrote about cioppino for The New York Times, the dish was already perceived as a bit worn out, and that was in 1988. “Many local people are tired of it,” she wrote, noting that the stew was mostly popular in the restaurants that catered to tourists around Fisherman’s Wharf.

And what, exactly, should it be?

The juicy, messy, extravagantly crab-packed cioppino at Sotto Mare, considered by many a standard-bearer, includes a little penne underneath all the crab in the shell and other seafood, soaking in the rich tomato gravy — but adding pasta to cioppino isn’t standard practice. While crab and tomatoes are the two ingredients nearly all cooks agree on, cioppino still has infinite variations.

In 1958, Jane Benet, the Chronicle’s food editor for more than 30 years, published a straightforward recipe calling for a long-simmered marinara sauce thinned with white wine and then used to poach crab, shrimp and a firm fish, such as rock cod, sea trout or bass.

But a version in “The Los Angeles Times California Cookbook,” edited by the food staff in 1981, is so different, it’s hard to believe it’s the same dish. It was adapted from a tuna fisherman named Joe in San Pedro and features lobster tomalley — the animal’s digestive gland — along with pine nuts and raisins.

Beginning in the middle of the 19th century, Italian fishermen, many of them from Liguria, came to San Francisco to work seasonally catching crab and other seafood. They brought their regional, unfussy fish stews along with them, adapting to the local ingredients.

But California’s coastal ecosystem has transformed since then, and much of the local seafood that might have been tossed casually into a thousand pots of cioppino isn’t as abundant as it once was.

Dungeness crab season is shorter and more delicate than it used to be — this past year, the California Department of Fish and Wildlife delayed its start in an effort to protect whales moving through the area. The previous year, a toxic algal bloom, likely caused by warming and acidifying waters, shut down crab fisheries for months.

Cioppino is in fact as fragile as the industries that support it, though it’s so intertwined with San Francisco’s culinary identity that it exists year-round on menus. It has to, because it’s such a big seller: Adriano Dela Rosa, the chef at Tadich Grill, says the restaurant makes about 70 orders on a busy day, no matter the season.

The fish broth is thin, a little weary, but stretched out with white wine. And along with rock cod, mussels and clams, it holds a handful of tiny, sweet Bay shrimp and locally canned Dungeness crab meat.

Cioppino made with canned crab isn’t unusual. At Scoma’s, they call it “Lazy Man’s” cioppino, indicating that the diner will not have to mess around with a crab cracker, working to extract the meat.

Every time I ate a bowl of cioppino, and no matter how it was served, the person next to me leaned over to ask how it was, or to comment on its authenticity, or to loudly regret ordering anything else. “What you got there, cioppino? I knew I should’ve gotten the cioppino. Fran, look, she got the cioppino!”

At Anchor Oyster Bar, Alberto Cruz makes the marinara a few times a week — a blend of garlic, onions and peppers, sautéed in olive oil and simmered with dried herbs, canned tomatoes and tomato juices for hours, until it mellows and thickens.

When a diner orders the cioppino, cooks thin the sauce out with clam juice, then drop the seafood in to cook, starting with the crab bodies. If you make it at home, you can smell and taste it: This is the moment where everything changes. The sauce shifts, taking on the sweet flavors of the crab shells, meat and tomalley, and the cioppino comes into view.

Slowly, the cooks add more crab, clams and mussels, which open in the pan, then a piece of cod and finally a few shrimp. Gilroy garlic, roasted until golden and processed with butter, is generously spooned over the top, and used to make the garlic bread that comes on the side.

One good way to determine a cioppino’s excellence: If you have leftovers, let’s say a little pool of sauce at the bottom of the bowl, what do you do with it? If the dish isn’t great, nothing. The server takes it away without a fuss and you get on with your life.

But if the cioppino is really good, as at Anchor — rich with the juices of the seafood that simmered in it, the toasty flavors of the crab fat, the sweet clam juice — you’ll see the value in that little pool of sauce.

You’ll be compelled to take it home, to toss it with hot, buttered pasta, or to bring it up to a simmer and use it to poach an egg. You won’t waste a single drop.