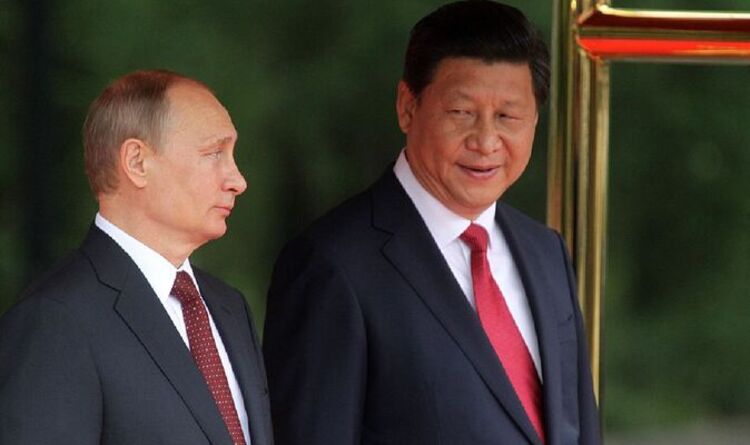 China plotting to 'exploit Russia' to expand into Indo-Pacific

Beijing may be ready to supply semiconductors and other technology to help Moscow survive economic pressures actioned to punish the aggression. Two EU diplomats with knowledge of the bloc’s assessments have warned that high-tech components could act as a shield against penalties from the US, the UK and Japan. EU leaders discussed the issue at the NATO, G7 and EU summits in Brussels on Thursday, March 24.

US President Joe Biden warned that China could be siding with Russia in a move that would jeopardise its standing with the west.

Biden said that China knows its economic future is tied to the West, after warning Chinese leader Xi Jinping that Beijing could regret siding with Moscow.

He told reporters: “I made no threats but I made it clear to him – made sure he understood the consequences of helping Russia.

“I pointed out the number of American and foreign corporations that left Russia as a consequence of their barbaric behaviour.”

The Biden administration has been pressuring China to refrain from supporting Russia including by helping it counter Western sanctions and providing military assistance.

China has not condemned Russia’s action in Ukraine, though it has expressed deep concern about the war as well as about Western sanctions, which it regards as counter-productive and unilateral.

Biden’s comments pointed to the economic interdependence of China and the United States, its largest trading partner.

That is leverage Washington wants to use to nudge China away from Russia after the two countries touted a “no limits” strategic partnership in February.

But any sanctions or other counter-measures against Beijing would have spill-over effects for the US economy, too, experts say.

Still, there are already signs that the Sino-Russian relationship may be hurting foreign investment in China, including significant capital flows from the country since Russia’s February 24 invasion of Ukraine, according to the Institute of International Finance.

“China understands that its economic future is much more closely tied to the West than it is to Russia,” Biden told a news conference on the sidelines of emergency meetings in Europe about the Ukraine war.

NATO promised Kyiv new military support and assigned more troops to the alliance’s eastern flank while London and Washington imposed fresh sanctions on Moscow during a trio of summits on Thursday aimed at showing Western unity against Russia’s war in Ukraine.

However, the support pledges by leaders from countries that represent more than half of the world’s GDP fell short of satisfying Ukraine’s pleas for tighter sanctions, including an embargo on Russian energy.

Russia supplies 40 percent of the EU’s collective gas needs and more than a quarter of its oil imports, and countries most dependent on this supply – in particular Germany – are reluctant to take a step that would have a major economic impact.

In a move that made Europe’s dilemma worse, Putin said on Wednesday that “unfriendly” countries must start paying in rubles for oil and gas, which would mean paying Russia hard currency to buy the rubles.