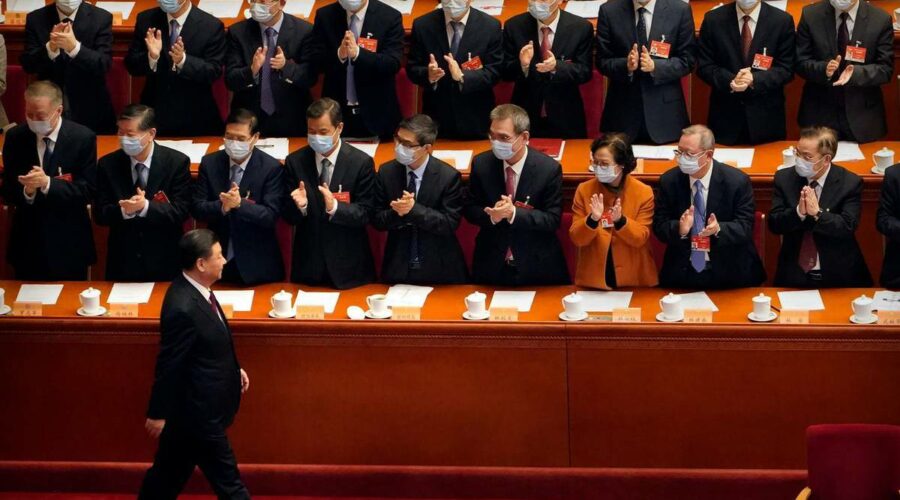 China won the first half of the Covid Cold War decisively. It executed lockdowns with immaculate precision, cuffing dissenters to balcony railings and sealing citizens in their homes.

Having near enough eliminated Covid within its own borders, it fired up its industrial engines to meet roaring demand for Chinese goods. A diplomatic coup over the United States followed, as the World Health Organisation ruled out the Wuhan lab leak theory.

Most powerful of all was China’s psychological victory; as Beijing exulted in the liberating discipline of the Chinese Way, the locked down West brooded over the selfish inadequacies of freedom.

Now, though, a lousy vaccine strategy and a counterfeit economic recovery are coming back to haunt the Chinese Communist Party.

A Western world that has spent a year luxuriating in existential crisis might dare to wonder: is the brute force of the authoritarian, centralised state no match after all for the innovative agility of a free capitalist society?

In an astonishing admission of weakness, China’s top disease control official has confirmed that the efficacy of the country’s Covid-19 vaccines is low. With trials abroad suggesting that protection rates could be as poor as 50 per cent, the country’s regulator is now considering whether to mix jabs to boost their effectiveness.

This is a catastrophe for China. The country is stuck in an unsustainable zero Covid trap, only able to maintain an upper hand over the virus by closing its borders to almost all foreigners and limiting domestic travel. Beijing could be left behind within months, as rival countries reach herd immunity and reopen for global business.

On this point, even the Chinese commentariat has been remarkably candid. State epidemiologists have taken to the airwaves, warning that China’s vaccine rates are insufficient to reach herd immunity by the end of year, let alone the end of the summer.

Newspaper column inches that usually foam against the “putrid ambitions” of anti-Chinese forces are instead analysing the progress of Britain, Israel and the United States with sober dread.

Nor are China’s vaccine woes the only threat to the country’s apparent Covid advantage. Doubts are starting to grow about Beijing’s miraculous economic recovery.

A recent IMF forecast stirred controversy, projecting that while Western economies would almost completely avoid permanent scarring – and US GDP in 2024 would be even higher than it was anticipated to be before Covid – China’s economy will end up 1.59 per cent smaller than pre-pandemic expectations.

This exposes the drawbacks of a Chinese model that prioritises ambition over invention, saving face over doing the groundwork, and scale over quality. The pioneering civilisation that gave us the wheel and the compass has “renewed” itself by becoming a piracy powerhouse that cannot innovate. This, it turns out, is a handicap in a pandemic.

China’s biopharma industry has remained small and low-grade because it is not possible to thrive in cutting-edge science by copying rivals (unlike with smartphones and solar panels).

Beijing has had to rely on outdated technology to churn out vaccines that are not only less effective than their Western equivalents but more expensive (the cost price for the Sinovac jab is US$30 per dose, compared with AstraZeneca’s US$3).

The state subsidises such mediocrity through an overly centralised procurement process that promotes a race to the bottom. The modest global growth of the Chinese pharma industry in recent years has been mired by corruption scandals and the recall of hundreds of thousands of vaccines.

It is in this troubled context that Chinese firms rushed out Covid jabs for the CCP. After the coronavirus outbreak from Wuhan, Beijing had hoped to rehabilitate its image through vaccine diplomacy. It is a strategy that may be about to backfire calamitously.

Not that the West is perfect. AstraZeneca’s woes show that developing and rolling out a highly effective and cheap vaccine is a challenge. As the Anglo-Swedish firm’s recent run-in with regulators also demonstrates, Western Big Pharma is not immune from legitimate criticism over data transparency.

Still, there is something in the fact that profit-driven Western companies have used Covid-19 as a selfish PR opportunity for themselves, rather than for the selfless greater good of their nations. With their reputations on the line, they have aimed to develop vaccines that work as quickly as possible – rather than as quickly as necessary.

The CCP’s “new development model” to unleash domestic consumption seems predestined for failure, given that it depends on the distribution of real financial power to ordinary citizens.

After slinging hundreds of millions of peasants from the fields into factories, meanwhile, China has run out of low-cost labour just as its population has begun to age rapidly. To solve these massive long-term problems, the CCP needs to liberalise and open up.

Instead, Xi Jinping has doubled down on building an isolationist totalitarian superstate. By contrast, European and American firms are set to power unexpectedly buoyant recoveries because a more dynamic capitalist environment has forced them to adapt to the new post-Covid world, shedding costs and changing their business models as required.

Centre-Left leaders who have convinced themselves that recovery can only be engineered by generous handouts and aggressive state projects should take note.

There is much we can learn from China’s values – its hunger and energy and innate investment in the future, rather than just the present (which share the same tense in Mandarin).

But if it fails to learn in turn from the West that freedom is crucial to progress, the resurgent Middle Kingdom may yet turn out to be a stillborn superpower.