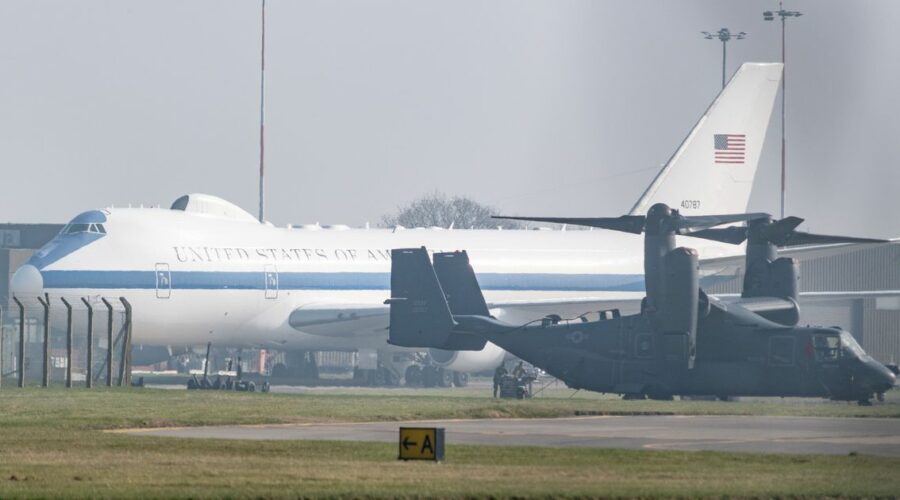 A Doomsday Plane that can withstand nuclear blasts has been spotted in a UK airfield amid fears that Russia will spark World War 3 following their invasion of Ukraine.

The Boeing 747 Nightwatch aircraft was pictured setting down in RAF Mildenhall in Suffolk as it travels with US President Joe Biden on his four-day mission to muster up support against the Kremlin.

Nightwatch is worth a whopping £150 million and has been constructed to hold out against electromagnetic pules from a devastating nuclear blast.

The US Government has held a fleet of Nightwatch command-and-control Boeing 747 E4-B since the 70s to preserve an airborne base during a catastrophic turn of events.

The nuclear safe aircraft, which was designed in the Cold War, is also known as the "Flying Pentagon". It has been reported that at least one E4-B is kept on 24/7 readiness.

It comes amid fresh nuclear fears after Vladimir Putin's mouthpieces appeared on state TV to warn alliance leaders that he will initiate WW3 if the west deploy any troops in Ukraine, Daily Star previously reported.

“They should understand that this will represent a direct clash between the armed forces of Russia and NATO.

“And how this collision will end is probably not worth explaining… This is called World War Three.”

World leaders have reportedly responded to the threats and are understood to be drawing up with "contingency plans" in case Putin does declare war.

The White House has quietly assembled a so-called "Tiger team" of national security officials to sketch out scenarios of how the United States and its allies, according to the New York Times.

He said that he expects that "allies will agree to provide additional support, including cybersecurity assistance and equipment to help Ukraine protect against chemical, biological, radiologic and nuclear threats.”